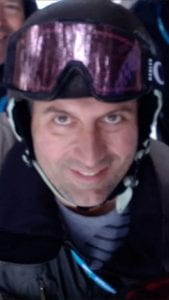 The skier who was the subject of a large-scale search at Whiteface Mountain has been located alive and well in Sacramento, California, according to state police.

Constantinos “Danny” Filippidis, a firefighter from Toronto, made contact with local authorities there, ending a multi-agency search that included forest rangers, state police and other state and federal agencies.

The circumstances regarding this case are under investigation, and further details will be released at a later time, according to state police.

Toronto Professional Firefighters Association President Frank Ramagnano said he heard from others that Filippidis had contacted his wife at about midday Tuesday. She then told him to call 911 for help.

Ramagnano said Filippidis was wearing his ski clothes “when the 911 medical help came to him.”

As for how he got to California, that is still unclear. “He said somehow he got hurt on the ski hill,” Ramagnano said. “He doesn’t remember much. He thought he had crawled into a truck for shelter or something. That’s what the New York state police are going to have to investigate. This is all what I’m hearing third hand, so I’m not really sure exactly.”

Ramagnano said people have speculated that Filippidis may have taken a plane to California, but he didn’t believe that to be the case. “He did not have any ID to do that, and I know his passport was back at the hotel in New York,” he said.

Filippidis went missing on Wednesday, February 7. Forest Ranger David Russell told the Explorer that Filippidis was last seen at the mid-station lodge area by his friends.

Olympic Regional Development Authority spokesman Jon Lundin said Whiteface staff had been able to track when Filippidis had used the chairlifts – Facelift or Gondolla – at the base of the mountain that day. He was last tracked at 1 p.m.

Friends reported Filippidis missing at 4:30 p.m. when he didn’t turn up. A large-scale search started the next day. His vehicle was located in the parking lot, and his shoes and belongings were found in the lodge.

There were 165 personnel working on the search on the final day, including 120 people in the field, Lundin said. The search included ski trails and the surrounding Forest Preserve. The search required technical skills, at times, as the terrain was rugged.

Lundin said no search like this one had ever taken before at Whiteface Mountain.

“Something to this degree at Whiteface?” Lundin said. “No one has any recollection of this ever occurring before.”

Ramagnano said 100 Toronto firefighters participated in the search, including 80 on the final day. He said he was impressed with the search effort and generosity of local businesses. “We’re so grateful to New York state and all those agencies, especially the Department of Environmental Conservation,” he said. “The community just opened up their arms to us. The hotel offering us rooms. We had restaurants providing us food.”