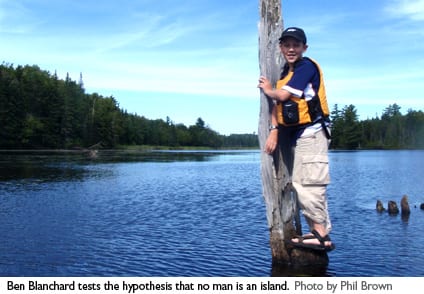 Every time I drive past the Deer River Flow on Red Tavern Road, I slow down to admire the stunning view southeast toward Debar Mountain. On a few occasions, I have stopped to take pictures. Finally, I decided to paddle the thing last summer.

My friend Phil Blanchard and his twelve-year-old son, Ben, planned to join me, but Phil fell ill on the morning of the trip. Phil didn’t think his suffering should stop Ben and me from enjoying ourselves, and it didn’t take much persuading for us to come around to his point of view.

The Deer River Flow is shaped like a Y. From the southern put-in on Cold Brook Road, it’s nearly three miles to the large concrete dam that impounds the water. About halfway to the dam, there is a riverine arm on the right that eventually passes under Red Tavern Road and connects with Horseshoe Lake.

Ben and I paddled to the dam and then followed the arm all the way to the lake before returning to the put-in. The round trip was exactly nine miles and took us five hours, including stops for lunch and photos. If you want a shorter trip, put in at Red Tavern Road and paddle to the dam and back. That would be a little less than five miles.

Most of the Deer River Flow lies within the forever-wild Forest Preserve, but there are about a half-dozen waterfront homes—one on the south end, the rest on the north end. The Deer River Campsite also has a few cabins and a number of RV sites on the northeast shore.

The flow is shallow, which deters motorboaters (jet skis are banned). On our trip, we saw only one motorized craft, a rowboat with a trolling motor.

The scarcity of motorboats is a plus for paddlers, but it’s also good for the ecosystem. The Deer River Flow has a milfoil problem (see sidebar), yet it would be worse if lots of propellers were churning the plants and sowing this invasive weed all over the lakebed.

The state Department of Environmental Conservation (DEC) has erected signs at the put-in warning visitors to check their boats for milfoil before launching. Since my canoes had not been used for several weeks (too long for plants to survive), we knew they were not contaminated. 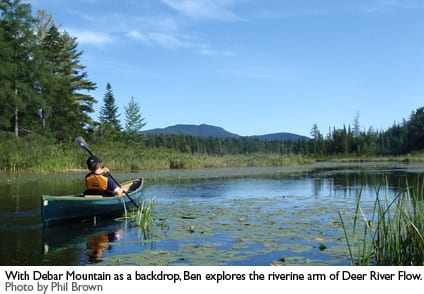 We were paddling a pair of solo canoes made in the Adirondacks. Ben was in a Spitfire from Placid Boatworks; I was in a Black Jack from Hornbeck Boats.

Soon after putting in, we flushed a great blue heron from the cattails and grasses along the shore. We followed a channel through the reeds and weeds, enjoying the view of Furnace Mountain west of the lake.

Once we reached the open water, we found ourselves fighting a headwind. It wasn’t overly strong, but I was worried that Ben might get tuckered out.

“Too bad about the wind,” I remarked.

“Because once the trip is done, you feel more satisfaction because you know you worked more and you earned it more,” Ben explained.

If only the wind would pick up and make our trip even more pleasurable. Alas, it didn’t, and in no time we were passing the riverine fork, a mile and a half from the put-in. I mentioned to Ben that we had paddled halfway to the dam.

Later, we passed a small island just before the dam.

“Just a little bit more,” I called out encouragingly. 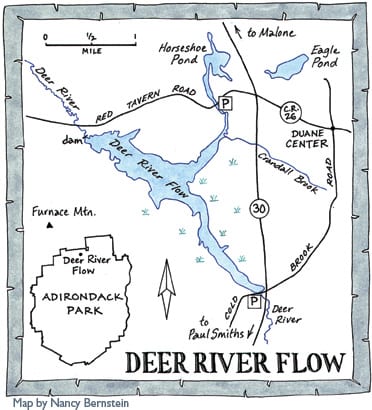 Anyway, one of us was glad to reach the dam and take a break. I was surprised by the size of the structure. It’s nearly three hundred feet long, and the top is about twelve feet wide. Water from the flow falls through two spillways and joins to form the Deer River.

From the dam, the Deer flows northwest for 6.2 miles to the Adirondack Park boundary and later empties into the St. Regis River. At the dam, the river is rocky, but the stretch within the Park is largely canoeable. Most of it is owned by the state as a result of a deal with Champion International in 1998.

Although not a natural setting, the dam is a convenient picnic spot, with a great view looking up the flow toward 3,300-foot Debar Mountain. While Ben and I ate our sandwiches, another party showed up in two kayaks and a canoe after paddling from the Deer River Campsite.

On our return trip, we took the detour up the riverine arm, which proved to be the best part of day. The arm is wide at first but soon narrows into a winding stream. We passed several stumps sticking out of the water. Ben climbed onto one so I could take his photo on the wooden islet. We also passed a deteriorating duck blind on the boggy shore.

About a mile after beginning the detour we came to the small bridge on Red Tavern Road and decided to continue to Horseshoe Lake, nearly a half-mile farther upstream. As we passed under the road, Ben announced: “My first low passage under a bridge in a canoe.”

“Like you’re in a canoe—except you’re under a bridge.”

After that milestone moment, we paddled up the channel, with small camps on the right and boggy wilderness on the left. From Horseshoe Lake, which lies within earshot of Route 30, we enjoyed views of several small peaks in the vicinity, including Humbug, Little Humbug, and Kary mountains. But the best views were on the way back. After passing under Red Tavern Road again, we paddled down the winding, grassy stream with Debar rising straight ahead of us.

Once we got back to the main body of the flow, we kept Debar in our sights, but our only objective was to get back to the car as soon as possible. Both of us were hungry and a little tired. Ben was happy now to have the wind at his back.