Home » Stories » How to Protect the Uplands 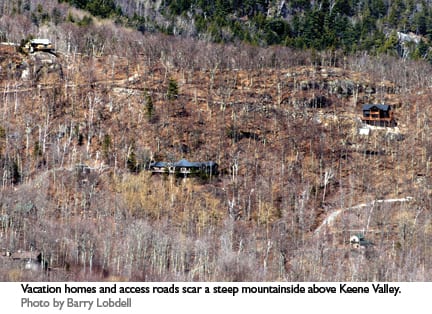 Conservation advocates are vowing to push state and local government leaders in the coming year to regulate development on ridges, slopes, and hilltops in the Adirondacks.

The Adirondack Council and other environmental groups complain that communities such as Lake George, Keene Valley, and Lake Placid are seeing their scenic beauty diminished by unsightly upland development.

John Sheehan, a spokesman for the council, asserts that just one house can mar the natural scenery in a mountain vista. He noted that landowners often clear many or most of the trees around a home to obtain an unobstructed view.

“They want to have a nice view, and then everyone else has a nice view of them,” Sheehan remarked.

Even before the new governor takes office in January, he said, the council will begin lobbying his aides and state legislators for a bill that would give the Adirondack Park

Ideally, Sheehan said, the APA not only would have jurisdiction over more upland projects, but it also would be empowered to require builders to minimize visual blight. For instance, developers could be required to leave enough trees in place to screen a house from view and to use earth-tone colors and non-reflective materials.

At the same time, the council plans to prepare a model ordinance for towns that want to regulate upland development on their own.

In recent years, the Adirondack Explorer has published several articles (including one in the September/October issue) calling attention to upland development and the lack of adequate control over it. Nevertheless, spokesman Keith McKeever maintains that the APA has a pretty good handle on the problem. 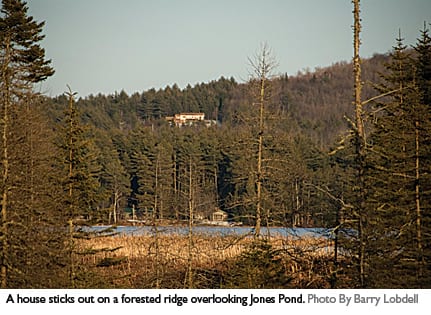 “We certainly agree that a six-thousand-square-foot structure on a ledge is going to have an impact, but we feel we have a lot of the uplands covered,” McKeever said.

He said the APA would take no position on legislation expanding its powers without first reviewing it.

Past articles in the Explorer focused on upland building around Lake George and in the town of Keene. Outside these two areas, McKeever said, most of the Park’s private uplands are zoned Resource Management, the strictest of the APA’s six land classifications. The APA has the power to review just about any project on Resource Management land, even the construction of a single house, and in such cases often requires builders to minimize visual impact.

But Sheehan said there are other areas in the Park where uplands are often not zoned Resource Management and where, consequently, development is or could be a problem.

He cited as examples the slopes along Great Sacandaga Lake, the Hudson River, the Fulton Chain of Lakes, and the Schroon River. “I think there are more than just two places they have to worry about,” he said.

The Adirondack Park Agency Act does give the agency authority over projects above the 2,500-foot contour, but virtually no development takes place at this elevation. In fact, McKeever could not give an example of a single house in the Park built above 2,500 feet. 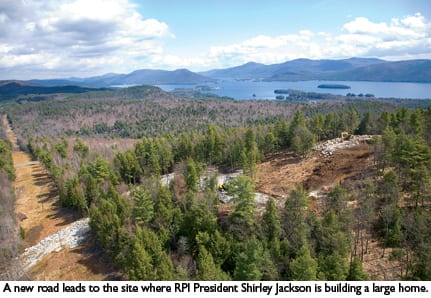 McKeever said the APA might push for a change in the law that would give it jurisdiction over projects above two thousand feet in elevation. Given that many of the Park’s uplands lie below two thousand feet, however, Sheehan does not think such a change would make a huge difference.

Indeed, one of the difficulties in crafting rules to control upland development is finding a workable definition for uplands. In part, that’s because land elevations in the Park range from about 95 feet at Lake Champlain to 5,344 feet at the top of Mount Marcy.

Sheehan said one possibility is to define uplands in relation to the average elevation of the surrounding landscape. In this scheme, all land above a certain elevation would be considered uplands, but the threshold elevation would vary from place to place.

He said such an approach might prove overly formulaic and complex. Another idea is to give the APA jurisdiction based on the potential visibility of a project. He said this could be determined by a visual-impact analysis or by mapping in advance the Park’s scenic resources.

Neil Woodworth, executive director of the Adirondack Mountain Club, argues that the APA has the authority now to write new regulations for upland development that impose a requirement for “substantial invisibility”—the same standard the agency applies to cell-phone towers.

Meeting this standard could require builders to avoid clear-cutting and to use earth tones, among other things. They also could be required to take steps to avoid soil erosion and septic-tank pollution.

“I think the framework of the Park Agency is broad enough to regulate those issues. I think that regulating upland development would be very appropriate and wise,” Woodworth said. “Upland areas in many ways are as sensitive for environmental evaluation as shorelines.”

Sheehan agrees that the APA could use its existing authority to adopt stricter upland regulations, but he thinks this is unlikely to happen without legislation. Moreover, McKeever said the APA’s focus at the moment is on shoreline development.

Some of the upland development appears to be occurring because most of the available shorefront around the Park has been developed in recent decades. That has been the case around Lake George.

Peter Bauer, executive director of the Fund for Lake George, said upland development in the lake’s southern basin is both unsightly and a threat to the lake’s water quality. “For people concerned about the scenic beauty and water quality of Lake George, this is clearly a huge issue,” he said.

The environmental threat comes from clearing land, building roads, and installing septic systems on steep slopes with thin soils. Bauer and other critics said such development can cause increased storm runoff that washes soil and pollutants into the lake.

This summer, Lake George Waterkeeper Chris Navitsky sued the town of Bolton after it approved a nearly mile-long driveway needed to reach three building lots on the Pinnacle, a scenic ridge near Bolton Landing (see  below). The lawsuit contends that soil erosion will worsen as hundreds of trees on the slope are cut down for the driveway.

Bauer said the APA’s enabling legislation needs to be updated to reflect the spread of upland development, which he doesn’t think anyone foresaw when the APA Act was written in the 1970s. He said that buildings on hillsides and ridges began to appear around Lake George in the 1980s, as wealthy people bought land and began constructing costly access roads and large, expensive houses.

To give just one recent example, Shirley Jackson, the president of Rensselaer Polytechnic Institute in Troy (reportedly the highest-paid university president in the United States), touched off controversy when she started building a ten-thousand-square-foot vacation house on a ridge north of Diamond Point in the town of Bolton.

Proposals to expand APA jurisdiction over the uplands would likely meet opposition from local officials in the Park. Fred Monroe, executive director of the Adirondack Park Local Government Review Board, which monitors the APA, said his organization would look at any such proposals with a skeptical eye.

“If they were to propose a prohibition [on upland development], I think we would be opposed to it,” Monroe said. “Reasonable conditions would be something we would take a serious look at.”

State Senator Betty Little, who represents most of the Adirondacks, does not see a need to amend the APA law, according to her spokesman, Dan MacEntee. “If the APA lacks jurisdiction, then the town planning boards have the responsibility of deciding whether or not to issue a building permit,” he said.

Indeed, the other option is to encourage towns to regulate the uplands on their own. Most Adirondack towns, however, have not been eager to restrict development. Fewer than twenty of the Park’s 103 towns and villages have adopted APA-approved zoning plans. Many towns don’t have any zoning plan at all.

One of the exceptions is Day, a town on Great Sacandaga Lake whose year-round population is below a thousand. In 2006, Day adopted a Viewshed Protection Plan to preserve the uplands overlooking the lake. The plan has been lauded by the APA.

“That would certainly be a model, and something we’d be more than willing to work with [towns] on,” said the APA’s McKeever.

The town requires that building lots not be clear-cut, that visual-impact assessments be submitted to the town, and that homes not occupy mountaintops or ridge lines visible from the lake. Also, new homes must use earth-tone materials and non-reflective glass so they blend in rather than conflict with the natural landscape.

The law has worked well. “We really haven’t had any flack about it,” Johnson said.

The town enacted the law after an upland property was clear-cut, leaving town residents dismayed with a view of what she called a “sand pit.” A mobile home was placed on the lot, and it remains there, on a cleared slope steep enough that storms wash soil onto a county road.

“We thought: what if the whole town ends up looking like this?” she said.

With a local law in place, however, Johnson said she would oppose further regulation from the APA.

Sheehan said local ordinances will help, but given the resistance to zoning in the Park, he thinks it unrealistic to expect the towns to control upland development by themselves. Also, he pointed out that a band of uplands can stretch through several townships or even cross county lines, as is the case with the lands around Lake George and Great Sacandaga Lake. Thus, he contends that a state agency is needed to provide consistency and a coherent vision.

According to Sheehan, protecting uplands makes economic as well environmental sense, given that tourists are attracted to the natural beauty of the mountainsides. “The greater economic good is when the entire region benefits  rather than somebody who just wants to build a house,” he said.