Home » Stories » Heeding the call of the birds 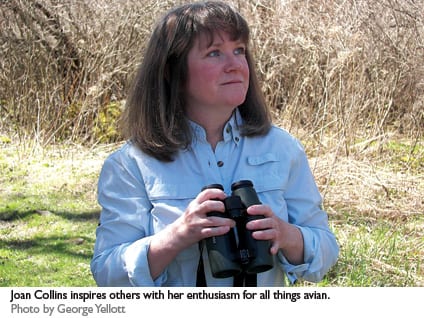 It is day two of the Hamilton County Birding Festival, and my husband, Jeff Scherer, and I are riding with Joan Collins and Judith Harper in the Moose River Plains. The plains are notable for the large diversity of habitats, which include bogs, open plains, boreal forests, hardwoods, and mountaintops of spruce.

A convoy of cars—toting twenty-six people in all—winds its way through the fifty-thousand-acre tract on roads that were once used for logging by the Gould Paper Company. The participants hail from all over the East, from as far away as Virginia and Ohio.

Collins and Harper are leading the five-hour expedition, which started bright and early at 7 a.m. Collins rolls down her window and keeps her ear attuned as she drives. “The nice thing about the Prius is it doesn’t make any noise,” she says of her hybrid automobile.

At forty-nine, Collins has earned a reputation in the Adirondacks as a skilled and capable birder. The former computer-systems engineer has lived at least part of each year in Long Lake for about twelve years with her husband, George Yellott, and sons William, who is seventeen, and Ryan, who is fourteen.

Not long after moving here, Collins took up hiking. “Someone in Long Lake told me that I would not be able to carry my two-year-old up Mount Goodnow, so the next morning I got up and carried Ryan up the mountain,” she says. “My older William, then five, walked on his own. I was hooked and started frequently climbing mountains and then decided to climb the forty-six High Peaks.”

During the winter of 2000 and 2001, Collins started seeing white-winged crossbills whenever she was climbing or cross-country skiing. She started birding that spring. She launched a conversation about birds in an e-mail group for Forty-Sixers and was soon contacted by Elliott Adams, then the mayor of Sharon Springs and renowned for climbing all the High Peaks barefoot. He urged her to undertake a variety of citizen-science birding projects. “By the end of that year, I was editor of High Peaks Audubon’s newsletter and was leading bird trips,” she says. “In the following year, I was giving presentations on different birding topics and became president of High Peaks Audubon. I guess birding quickly became an intense interest.”

Over the years, she also got involved with the Audubon Council of New York State and several Audubon chapters. She now serves on the board of Northern New York Audubon and is recording secretary for the New York State Ornithological Society.

Birding with Collins is as much an auditory experience as it is a visual one, if not more so: she finds her birds by listening for their songs. As we drive along, she announces each bird she hears in the dense forests. A black-throated blue warbler. An ovenbird. A hermit thrush. “I like taking a walk and just hearing them, “Collins says. “I don’t have to see them.”

We hear a Swainson’s thrush in a coniferous forest, followed by a winter wren, a white-throated sparrow, and a Blackburnian warbler. She also hears a cedar waxwing, a rose-breasted grosbeak, and blue-headed vireo. But it’s an olive-sided flycatcher that stops the Prius. “Yeah,” she says, pulling over. “That’s a good one. It goes pit-pit-pit. They always like areas that have been destroyed by beavers.” 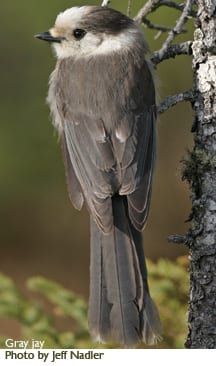 We stop at a wetland with tamarack trees. Collins hears a scarlet tanager—which she says sounds like a robin with a scratchy throat—and a Nashville warbler. She starts scouting for a black-backed woodpecker, which is among the more coveted sightings in this region. Another birder says she wants to see an American three-toed woodpecker, which is what Jeff wants to see, too. Instead we hear a black-throated green warbler singing “zee-zee-zee-zoo-zee” and a white-throated sparrow whose song sounds like “O, sweet Canada-Canada-Canada.”

Back in the car, Collins soon hears a Canada warbler. “Do you hear the jumble of notes?” she asks. “That’s the Canada warbler singing. This is a worth a stop.”

Collins then hears a boreal chickadee and asks the group for strict silence. In the quiet, she hears another bird, a yellow-bellied flycatcher. Another member of the group spots a yellow-rumped warbler, and others trail him for a glimpse of the brown and yellow bird.

Resuming the drive, Collins tells us about the bird safari the day before on Sabattis Road in Long Lake, where they tallied fifty species in the rain. While she talks and drives, she continues to announce what she hears: a magnolia warbler, a black-and-white warbler, a Hibernian warbler, an indigo bunting.

Birding with Collins is a nonstop education. When she hears a gray jay, she tells us how these amazing birds spend their summer hiding food in thousands of locations; in winter, they return to each cache to retrieve the food.

We stop at Helldiver Pond, where she and Judith lead the group down a short trail to the pond. Collins hopes we will see a gray jay. The trail takes us past tall pines and shrubs of Labrador tea. At the pond, we see a beaver lodge and a pitcher plant and hear the croak of bullfrogs. Collins hears a winter wren and a hermit thrush. On the way back to the cars, she spots a brown creeper going up and down the tree.

But the real excitement occurs near the parking lot. “There it is!” Collins says. “It’s the gray jay.” In fact, it’s more than one gray jay—it’s a family of four, including two immature birds.

Binoculars and cameras point skyward into the pine trees, where sure enough a gray jay sits on a branch. It’s a beautiful bird, with a pale-gray face and forehead, a short black bill, and a long tail. Collins tosses some cashews on the ground, hoping to lure it down to give us a closer look. But the jay knows that if he bides his time, we’ll leave, and he’ll still get the cashews. He stays up in the trees but soon flutters to a branch near me, giving me an unobstructed close-up. 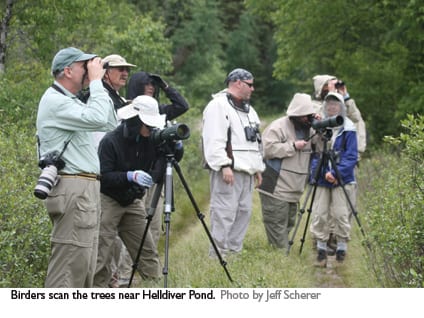 Joan’s enthusiasm for birding is clear in the stories she tells. She never tires of watching adult birds feeding their young, and she loves to go owling in the dark. She cherishes the memory of watching common redpolls burrow and tunnel in the snow—an occasion that yielded an article for the Kingbird, a journal of the New York State Ornithological Association, and a video for the Cornell Lab of Ornithology. She once witnessed a fight between a common raven and golden eagle in her Long Lake yard—which she regards as one of her finest birding moments.

But she’s not interested only in birds. After driving away from Helldiver Pond, Collins sees a shadow disappear into the woods, probably a bear. Down the road, she spots a snapping turtle laying eggs in the road and signals the drivers behind us to veer around it.

The next stop is Icehouse Pond, where she hears a magnolia warbler and a chestnut-sided warbler. The trail is dry and surrounded by shrubby growth. A blue-headed vireo sings in the distance, while a purple finch darts about in the tallest trees. On the ground, we see coyote scat. An eastern phoebe flits about.

At the pond, where we see the carnivorous sundew plant, Collins hears a Swainson’s thrush in the distance. On the way back, we stop at some wetlands, where one of the birders sets up a scope. Everyone gets a vivid look at a yellow-rumped warbler. Another birder spots a broad-winged hawk soaring in the sky.

The walk gives me a chance to talk to Collins. Midway through our conversation, she interrupts to listen to a black-backed woodpecker. She leads the group into the woods, where we see a female. “I have a feeling she has a nest out here,” says Collins, who then apologizes needlessly for disrupting our conversation. 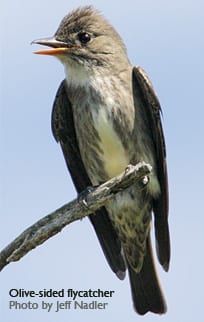 By now it’s noon, and members of the group have started to head out. It’s been a rewarding safari, with fifty-three species tallied. For Collins, though, it’s been a rather tame outing. For Mountain Birdwatch surveys, she has hiked peaks in the dark to arrive on the summit at 4:30 a.m. For her work on the The Second Atlas of Breeding Birds in New York State, she hiked, canoed, and biked into remote areas of the Adirondacks. “Often, I would underestimate the hiking time and end up bushwhacking in the dark to reach a destination,” she says.

As passionate as she is about birding, Collins does not lead bird tours for a living. She also doesn’t keep a life list of the birds she’s seen. Nor does she travel the continent in search of rare birds. “I guess I bird mostly for science as opposed to personal reasons, which might explain why I see no need to keep a life list,” she said. “Elliott Adams once said that if you can’t remember anything about a species you’ve seen, then what is the point of checking it on a list? I agree!”

A state-licensed guide, she does take fellow birders on canoeing, hiking, and skiing trips for Northern New York Audubon and the Laurentian chapter of the Adirondack Mountain Club. She also teaches a course on “Birds of the North Country” for SUNY Potsdam’s lifelong-learning program.

Her dream job would be doing field research in the boreal forest of northern Canada. She’d also love to host birding expeditions for small groups of serious birders at her house in the morning and do presentations in the afternoon. But for now, Collins is busy raising her sons, both talented pianists.

Her older son, William, is studying piano at the Interlochen Arts Academy in Michigan. She is also a longtime hospice volunteer, a devoted Red Sox fan, and an avid reader of nonfiction books on the environment, technology, and, of course, ornithology.

Harper marvels at Collins’s knack for identifying birds by ear. “Joan has that innate quality that’s highly musical and that enables her to be able to learn innumerable bird songs,” Harper says. “But what makes her a great birder is she totally focuses.”