Home » Stories » Falling for the Jessup 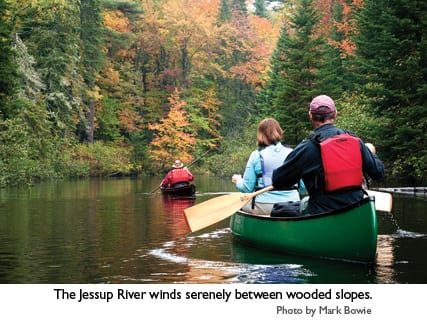 As we head to Indian Lake for our exploration of the Jessup River, weather is on our minds. The forecast calls for storms by midafternoon, but as we arrive before 8 a.m. the sun is breaking through the overcast and the thermometer reads 54 degrees. Moisture from overnight rain adds a rich luster to the fall colors that climb the hillsides. So far, at least, we have good autumn conditions.

We rendezvous at the Indian Lake Islands Campground at the southern end of the lake. Jeannie and I join photographer Mark Bowie and Mike Prescott, a retired school administrator and licensed guide who takes advantage of any opportunity to get out in the wild.

We leave a car at the campground’s expansive launch site (paying a $6.00 day-use fee) and drive 5.7 miles to our put-in point where Route 30 crosses the Jessup south of the lake. There’s a small pull-off next to the road, but a group has set up camp there. On the east side of the bridge, a dirt road leads to a parking area by the river, but I leave my low-clearance car on the roadside and carry the canoe and gear to the riverbank.

One of the campers across the river shares intelligence with us. Beavers have been busy, especially upstream, but the water is running high due to heavy rain and our route downstream should be fairly clear.

We push off for a ten-mile paddle that will take us down 2.5 miles of river, five miles down the fjord-like Jessup River Arm of Indian Lake, then back up the lake to Lewey Bay and the launch. Along the way, signs of civilization are limited to a couple of tent camps and one vacant-seeming cabin until we approach the launch and Route 30. The state campground offers boat-accessible tent sites scattered unobtrusively along the shore and on the lake’s islands. Most of the sites we pass on this late September day are unoccupied. 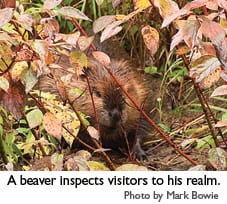 As we push off from the riverbank, mist surrounds us, veiling a forest that is about halfway to peak color, with yellows and oranges setting off dark bands of evergreen. The current is brisk, and we move effortlessly on a meandering course between alder-covered banks that close in to eight yards’ width and stretch to maybe fifteen yards in the wide passages.

Almost immediately a sturdy brown creature slides from the bank into the water, confirming the report that beavers are out and about. We see several before we reach the lake, including one cool customer who peers calmly at us from his vantage point in the riverside brush long enough for Mark to get a close-up. Once he has satisfied the paparazzi, he drops into the water, surfaces a few yards away to slap a loud warning and disappears again beneath the surface.

A few river turns later, we come upon a beaver dam spanning the river, but the water slides over the top and carries our canoes with it for easy passage.

We reach a rapids forty-five minutes into the trip, the one serious obstacle to navigating this stretch of river. Pulling out on the right bank we carry for about a quarter mile, on a well-defined and level path. At slightly lower water we would probably have to carry as much as another quarter mile, but today we put in and navigate rest of the rapids. We suffer only a couple light bumps on rocks before entering the flat water where Dug Mountain Brook enters from the right.

Here, about two miles from where we began, we will leave the river for a short hike to the Dug Mountain Falls. As we pull to the sandy bank where the brook enters, we are greeted by an almost surreal sight: a man in camouflage head to foot standing motionless on the delta next to the woods, his rifle held upright in front of him and his face masked in camouflage. He doesn’t move or acknowledge our arrival, standing like a Beefeater until Mike walks up and extends his hand, which the man shakes. Turns out he and some friends are bear hunters from Illinois and that some of his party are in the woods near the falls. Since we are wearing bright colors and are a fairly noticeable bunch of paddlers we decide to hike in spite of the possibility of being mistaken for bear. We talk a lot as we go, just to be sure. 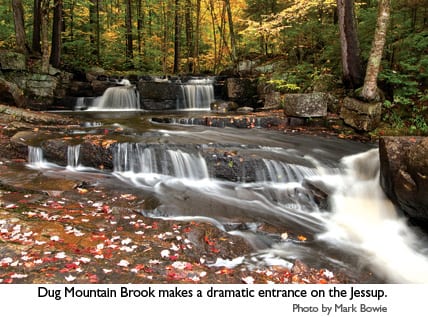 Dug Mountain Brook enters the Jessup by falling musically over a series of rock ledges, dropping maybe eight feet beneath a canopy of red and orange leaves. It’s an arresting sight that captures Mark’s attention for a while. These are the lower falls. The larger upper falls wait for us about a ten-minute walk on a gentle path through the hardwoods above the brook.

We hear the falls before they appear through the trees. From the path we look down on the falls, where water drops twenty-five to thirty feet into a small rock-lined pool. The song of the water and the close enclosure of the fall foliage make this feel like a place apart from the larger world. 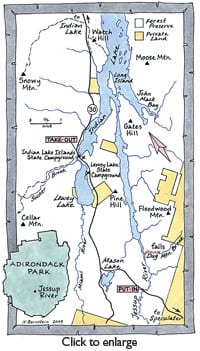 Back on the river, the passage widens into the Jessup River arm of Indian Lake. Though still narrow here, the passage is wider than upstream and the course is straighter. We have views to the north, past steep shorelines where the autumn colors seem closer to peak than they were to the south. The shores are becoming rocky and raised. Indian Lake is manmade and releases from the dam have left water levels within the impoundment at a low level in spite of the rain that swelled the river itself. Much of the shoreline we see would be submerged at other times. One rock face along the shore is marked with a gauge in one-foot intervals that indicate the water level is almost eight feet below the full line.

Though the morning has been mild and gentle, we are reminded of the weather forecast as we go ashore at a marked picnic area upstream of where the arm opens into the wider lake. The wind is freshening and clouds are lower and moving faster. By the time we finish our lunch and resume paddling, a storm seems to be impending. The strengthening wind is behind us, making the paddling easy. But we have to round Indian Point soon and turn in the opposite direction to head for the launch at the head of the lake. We agree that we will soon pay for this temporary tailwind with a tough paddle upwind.

We hear thunder rumbling at a long distance to the south as showers begin. The sky is darkening as we near what I think is Indian Point. It turns out to be an illusion. We have farther to paddle in the arm before we reach the final stretch.

As we near the true Indian Point, the water widens and Long Island stands before us guarding the long stretch of lake to the north. We round the point prepared to dig in against the wind, but remarkably it calms and the rain lifts.

We have an easy paddle south, passing a low rocky island that when the lake is full would be a dangerous shoal beneath the surface. As we pull near to the launch, rain begins in earnest, but instead of thunder we hear the muted calls of a pair of loons approaching each other near the western shore.

We complete our trip just in time, as the storm finally arrives and the clouds open.