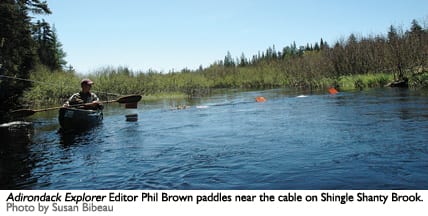 Agency says the public has the right to travel on a disputed stretch of Shingle Shanty Brook.

Weighing in on a long-running controversy, the state Department of Environmental Conservation says the public has the right to paddle through private land on Shingle Shanty Brook and adjoining waterways that connect two pieces of state land in the Whitney Wilderness.

What’s more, DEC has ordered the landowners to remove cables and no-trespassing signs intended to deter the public from paddling the waterways.

DEC issued the order after failing to reach an agreement with the landowners—the Brandreth Park Association and its affiliate, the Friends of Thayer Lake—that would have permitted the public to use the waterways on a trial basis.

After the landowners rejected this proposal, Christopher Amato, DEC’s assistant commissioner for natural resources, warned them that the department might refer the matter to the state attorney general for legal action if the cables and signs are not removed.

“The Department is unwilling to acquiesce in the Association’s continuing interference with the public’s right to navigate Mud Pond, Mud Pond Outlet, and Shingle Shanty Brook,” Amato wrote the landowners’ attorney, Dennis Phillips of Glens Falls, in early fall. 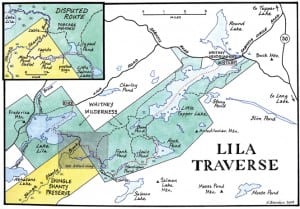 The waterways mentioned form a canoe route connecting Lilypad Pond in the Whitney Wilderness to the lower section of Shingle Shanty Brook, which also is in the Wilderness Area. Shingle Shanty flows into Lake Lila, a popular canoe-camping destination. Paddlers sometimes travel on the disputed waterways as part of a longer canoe trip between Little Tupper Lake and Lake Lila.

The landowners insist that the public has no right to paddle through their property. They note that after the state bought Little Tupper Lake and adjacent lands in 1998, DEC built a carry trail from Lilypad Pond to Shingle Shanty Brook so paddlers could avoid the private land.

The controversy was sparked in part by an account in the Adirondack Explorer, published in 2009, of a canoe trip through the Brandreth property. After the article appeared, the Sierra Club asked DEC to force the landowners to take down a cable strung across Shingle Shanty and remove no-trespassing signs.

Amato said DEC began negotiating with the family in an effort to ward off a court battle. “If people go to court, they harden their positions,” he said. “It just breeds more antagonism.”

The Explorer obtained copies of correspondence between DEC and the Brandreths (or their lawyer) after filing a freedom-of-information request with the department.

In a letter in March, Amato outlined a compromise in which the Brandreths would allow the public to paddle the waterways unimpeded for two or three years. At the end of this experiment, Amato wrote, DEC and the Brandreths would “discuss whether and under what conditions public access to the Shingle Shanty route should continue.”

On September 3, Phillips wrote Amato to inform him that the Brandreth Park Association had “almost unanimously” rejected the proposal. He requested that DEC and the State Police remove, ticket, and prosecute “trespassers” who paddle on the waterways in question.

Amato, who paddled the waterways himself last summer, as a guest of the family, countered with a request that the landowners remove any cables, signs, cameras, or other impediments or deterrents to passage. “The Department has concluded that Mud Pond, Mud Pond Outlet and Shingle Shanty Brook are subject to a public right of navigation, and that members of the public are therefore legally entitled to travel on those waters,” he wrote on September 24.

Neither Phillips nor Judson Potter, the president of the Brandreth Park Association, would comment on DEC’s demand. However, in letters to the department they contended that only a judge can determine whether the waterways are open to the public under the common-law right of navigation. If they hold to that position, it’s likely that the matter will wind up in the courts.

Under the state’s common law, the public has the right to paddle rivers and other waterways deemed “navigable-in-fact.” This includes the right to portage around rapids and other obstacles. To be navigable-in-fact, a waterway must be navigable in the ordinary sense of the word and meet other criteria as well. For instance, the public must be able to access and exit the waterway without trespassing.

The experience of numerous paddlers suggests that Mud Pond, Mud Pond Outlet, and Shingle Shanty Brook are navigable by canoes and kayaks, at least for much of the year. The larger disagreement is over what other criteria must be met.

The Brandreths and their lawyer contend that a river is navigable-in-fact only if it has a history of commercial use. Since Shingle Shanty and the other two water bodies lack such a history, they say, it fails this legal test. DEC, however, contends that the legal test is whether a river has the capacity for trade or travel and, furthermore, that recreational use can demonstrate this capacity.

“The main message is that in a situation where a water body can be used for recreational purposes, it has the capacity for trade or travel and therefore meets the common-law test of navigability,” Amato e-mailed the Explorer.

In its 1998 decision, the court rejected the landowner’s argument that consideration of recreational use expands the common-law right. “We do not broaden the standard for navigability-in-fact, but merely recognize that recreational use fits within it,” the judges said.

Elsewhere in the decision, the court wrote that “of paramount concern is the capacity of the river for transport, whether for trade or travel,” and that evidence of such capacity “need not be limited to evidence of its capacity for the movement of commercial goods.”

In letters to DEC, Phillips argued that the court meant that recreational use can be considered in addition to commercial use, not in place of it. He cited a passage from the dissenting opinion (written by a judge who differed with the majority over another issue): “The traditional commercial viability test … survives and is updated to include a modernized influx of realistic recreational usage.” Phillips said this view is supported by the writings of other judges in the Sierra Club case and in related cases. “We are of the opinion that commercial use [as the legal test] is alive and well,” the lawyer remarked in one letter.

What does all this mean for paddlers? If making the trip from Little Tupper to Lake Lila, can they canoe through the Brandreth property or not?

“They have to make that choice. I suppose they run the risk of being sued if they go there before a court resolves it,” said John Caffry, a lawyer who intervened in the Sierra Club case on behalf of the Adirondack Mountain Club. He added, however, that the more likely antagonists in court will be DEC and the Brandreth family. Caffry agrees with the department’s lawyers that the right of navigation does not depend on commercial use. “The old cases looked not just at commerce but at trade and travel in a broader sense,” he said. “That makes sense if you think back to the old days when rivers really were highways. People traveled on rivers for many purposes. … What the court did in the Moose River decision was to bring that concept into the modern day.”