Home » Stories » Around the mountain 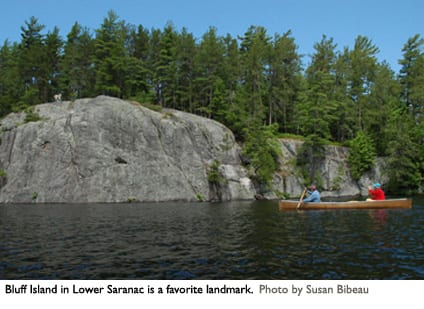 It can be a leisurely six-hour trip, starting a block from our office in Saranac Lake village. Or, if you’re a champion paddler and like to make waves, you can churn through this eleven-mile loop in an hour and a half, which is just about the winning time each May when canoeists and kayakers compete in the Round-the-Mountain Race.

On this weekday in early July, we choose to be leisurely. Rachel and I in our kevlar tandem, and Adirondack Explorer designer Sue Bibeau in her twelve-foot solo canoe, set off from the state boat launch on Lake Flower. We soon leave the traffic noise on River Street (NY 86) behind as we follow up what is essentially a flooded Saranac River (dammed long ago to create Lake Flower—hence the name “River Street”) through the narrows into Oseetah Lake, with its wild marshlands and mountain setting, and a mile later onto the actual river where it drops about three feet in a cascade coming toward us. We enter a lock at this point, under the cheerful management of the lockkeeper.

Soon our two canoes and a party boat are hoisted to a higher level, above the cascade, as water surges into the lock.

Then on up the winding river, through Second Pond, First Pond, and the narrows leading into the gorgeous waters of Lower Saranac Lake. From there we make our way among the forested islands and skirt the north shore to the east end of the lake, concluding our voyage at the boat launch on Ampersand Bay where Sue had left her car (otherwise we would have had a twenty-minute walk back to our starting point). 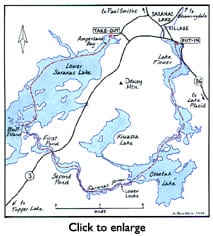 What most strikes me about this excursion is the combination of landscapes and waterways, of developed and protected lands, of starting out in a bustling village and paddling past lakeside homes and summer camps—but then, quite abruptly, entering the state Forest Preserve and being flanked by forever-wild lands much of the way.

Afterwards I asked Rachel and Sue for their impressions.

Rachel said she liked “seeing people enjoying themselves at the locks, the campsites, the swimming places. The fishermen, paddlers, kids, dogs, party boats, homeowners. Everybody having a good time in this beautiful setting.”

Conversely, she liked the fact that the water was not crowded with people and motorboats, as it might be on a weekend during the summer.

“We experienced the kind of peace and quiet you wouldn’t normally expect so close to civilization,” she said. “I also loved the changing scenery—the big waters and small waters, the islands with their appealing campsites, the rocks and bluffs, the white pines along the shores, the mountains all around—Ampersand, the Sewards, Boot Bay Mountain, the McKenzie Range, you could even see Algonquin at one point.”

It’s perhaps notable that Dewey Mountain, after which the Round the Mountain Race is named, could be seen only at the beginning and end of the trip.

Rachel was also fascinated by the history of the state campsites in the region.

For much of the twentieth century, they were occupied by permit holders who were allowed to build elaborate tent-platform camps and docks, install propane refrigerators and other amenities, and renew their permits annually.

As the public demand for prime campsites increased, the favoritism of this system came under growing criticism. A site we visited on Knobby Island still retained a chunk of cement dock constructed long ago by a permit holder, though there was no trace of the tent platform. (These structures were removed in the early 1970s, when new rules for the use of state lands took effect.) 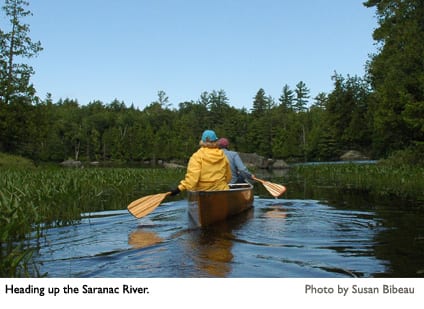 Sue said she liked “the intimacy and closeness” of the Saranac River, and she was taken with the variety of islands on Lower Saranac and especially Bluff Island, with its looming walls of bedrock. She was impressed with the politeness of the motorboaters, who slowed down and waved as they passed.

She also was interested in the old family camps on Lower Saranac, including Pinehurst, the Guggenheim retreat, the Mark Twain Camp (where the writer once stayed), and Knollwood, the summer home of Louis Marshall, a principal creator and defender of the Forest Preserve whose sons, Bob, George, and Jim, also became champions of wilderness preservation.

“I liked the drizzly rain as we were paddling on Oseetah and the first part of the river—the misty, moody feeling—and the contrast when the rain stopped and the sun came out. The cloud formations were wonderful,” Sue said.

Another highlight of the trip for all of us: While paddling across the lake, we saw a mature bald eagle flying overhead that later alighted in a pine near Knollwood.

This canoe route can be shortened by starting at Kiwassa Lake, which flows into Oseetah, or by starting at the boat launch and state campground headquarters on Second Pond, about half a mile from Lower Saranac. But the trip could be extended, too, by camping on one of the islands or at other sites on Lower and Middle Saranac, and paddling out from there. In fact, if you had the time and inclination, and you don’t object to some arduous canoe carries, you could keep paddling for weeks or even months, going south to Old Forge, north to the St. Lawrence River, or on up into Canada and Maine via the Northern Forest Canoe Trail. However, I think we’ll leave that story to some other explorers.