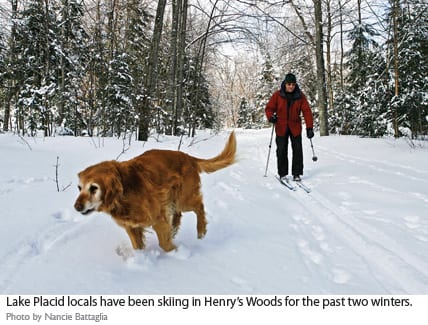 Winter came late. We didn’t get our first decent snowstorm until the second week of December, maybe six inches over two days—enough to ski the new trail at Henry’s Woods outside Lake Placid.

The 2.5-mile trail winds, climbs, and descends through a two-hundred-acre preserve on the outskirts of the village.

Tony Goodwin, executive director of the Adirondack Ski Touring Council, designed the trail for hiking and skiing. It’s five feet wide, and most of its surface is smooth and covered with crushed gravel, making it a good bet whenever there isn’t much snow.

Goodwin classifies the difficulty as “low intermediate or novice,” depending on conditions. “There is one S-turn that would be a bit of a challenge for a novice skier,” he said. “The rest is novice terrain.”

He added that there are plans to build three other trails in Henry’s Woods, though only one will be suitable for skiing. When completed, the trail system will exceed four miles. 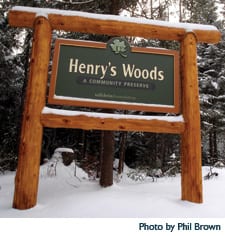 Located off Bear Cub Road, Henry’s Woods is owned by the Uihlein Foundation. The preserve is named after the philanthropist Henry Uihlein. The trail did not officially open until this past fall, but locals have been skiing it for the past two winters.

From the parking lot, the trail climbs gently to a junction at 0.3 miles, the start of a 1.9-mile loop. Goodwin recommends skiing the loop clockwise. In the other direction, skiers face a steeper downhill with sharp turns.

Following this advice, I turned left at the junction and soon ran into a couple hiking with three dogs. The trail climbed steadily for nearly 0.4 miles, though not so steeply that I had to herringbone. It then leveled off for about a half-mile, passing through an evergreen forest adorned with fresh powder.

At 1.25 miles, I started downhill and quickly came to the turn Goodwin had warned about—a sharp left, then right. Thereafter, the descent eased, and I practiced my kick and glide on the way back to the junction, where I ran into a pair of skiers.

From there, I enjoyed a pleasant, gradual downhill to the parking lot. It was a short but sweet start to the ski season. 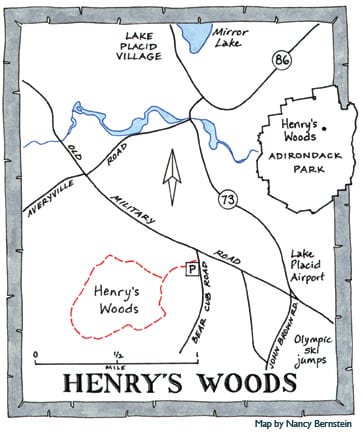 Directions: From NY 73, turn onto Old Military Road near the ski jumps south of Lake Placid village. Drive 0.8 miles to Bear Cub Road and turn left. The entrance to Henry’s Woods will appear on the right in 0.1 miles. If coming from Saranac Lake, turn right onto Old Military Road from NY 86. Bear Cub Road will be reached on the right after 3 miles.