Home » Stories » A sure thing for skiers

Paul Smiths VIC offers more than just good snow: it has doubled the mileage of ski trails since taking over the facility from the state in 2011.

Winter started slowly, so after we received a few small snowfalls in late November, I jumped at the chance to go on my first ski of the season. Since we still had no base, I figured my best bet would be the Adirondack Visitor Interpretive Center in Paul Smiths.

The VIC is fun to ski anytime, but it’s a particularly good choice early in the season or in a low-snow winter. Its smooth trails don’t need a lot of snow to be skiable.

What’s more, Paul Smiths lies in a weather pocket that always seems to have more snow than nearby places. Given the dearth of snow last winter, the VIC became a refuge for cross-country skiers.

“We had really great skiing most of the winter when nobody else had snow,” remarked Brian McDonnell, who manages the VIC for Paul Smith’s College.

On the day of my trip, the VIC had six inches or so, plenty for kicking and gliding on most of its trails. I had not skied there since the Adirondack Park Agency turned over the operation to the college in 2011, and I was delighted to learn that the center has greatly enhanced its offerings to skiers.

McDonnell, who owns Mac’s Canoe Livery in Lake Clear, has doubled the mileage of ski trails. There are now 8.75 miles of classic-ski trails, 8.5 miles of skate-ski trails, and 10.25 miles of snowshoe trails. Despite the designations, all of the trails are open to everyone (though snowshoers are asked not to walk in ski tracks).

The skate trails are new. The VIC has a number of service roads and logging roads that in the past were closed to the public. Since the roads are wide and smooth, McDonnell realized that they would be ideal for skate skiing. Another innovation is that the VIC is grooming the ski trails, using a snowmobile and drag.

One other change might be less welcome. Skiing used to be free, but the VIC now charges $10 for the use of its winter trails, which McDonnell says is necessary to cover expenses. A season’s pass costs $75.

Ten bucks to ski more than twenty-seven miles of trail strikes me as a bargain. There’s something here for every skier, from a short jaunt around Heron Marsh to an eight-mile loop on woods roads to a trek to the top of Jenkins Mountain.

I planned to ski an old favorite known as the Esker Trail, which boasts the biggest downhill run on the VIC property other than Jenkins Mountain (which is more suitable for snowshoeing). From the VIC headquarters, I coasted down to Heron Marsh and continued along the marsh to its outlet.

The marsh offers some of the VIC’s best scenery: a white, frozen landscape, interrupted by dark snags, with Jenkins on the horizon. The trail passes two boardwalks that allow you to ski a short distance into the marsh and take full advantage of the views. 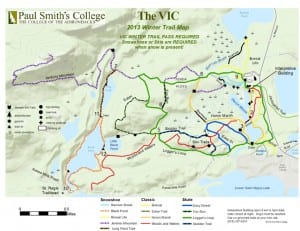 After a mile, I reached the marsh’s south end, where the outlet spilled over a dam at Shingle Mill Falls and morphed into a dark ribbon flowing through snowy woods. I paused to take out a trail map that I had picked up in the VIC building. It was last year’s map, but I was told it would do. It proved adequate, though I was stumped at times by unmarked intersections. Since my trip, the VIC has published new maps and put signs at the intersections, according to McDonnell.

Just after crossing the outlet bridge, I reached a fork. If you’re doing a loop around the marsh, bear right here. I went left onto a ski-skate trail called the Logger’s Loop. I could have stayed on this trail for a good while, but I got off at the next intersection as I wanted to see an overlook marked on the map. After a few more turns and a bit of a climb, I reached a knoll that looked down into a hardwood forest—far from spectacular, but it made the point that the woods are a destination in themselves.

Now on the Woods and Waters Trail, I descended gently to a gazebo in the middle of nowhere. I could have got back on the Logger’s Loop here, but I stayed on Woods and Waters for a third of a mile or so and then cut over to the Skidder’s Trail.

Typically, a skid road is a rough path through the woods traveled by skidders, large tractors used to haul logs. The Skidder’s Trail lived up to its name: instead of gliding over a smooth surface, I was threading my way among humps of grass. Given enough snow, this trail will be fine, but on this day the skiing was marginal at best. Fortunately, I soon reached the Logger’s Loop again.

I followed the Logger’s Loop a short distance and picked up the start of the Esker Trail. This part of the VIC was logged recently and looks nothing like it used to. The road is wide, the woods are thin. The locale is not especially scenic, but it’s interesting to see what a logged woods looks like. Soon after passing a large clearing (a log landing), the trail started climbing the esker, a narrow ridge formed by a glacier.

This is where I got turned around. Because of the disturbance of the land and absence of signs, the trail was not clear. I had stopped to consider my options when a fellow skier caught up to me: Phil Gallo of Saranac Lake (not to be confused the author Phil Gallos, also of Saranac Lake).

After some chit-chat, we continued upward, and Phil made the unwise decision to follow me.

At the top of the ridge, we encountered a large fallen tree. I assumed it was blocking the path, so I went around it, side-stepped down a short slope on the other side, and came to an obvious trail. Taking out my map, I couldn’t find this intersection. As we pondered which way to go, we saw another skier unfortunate enough to follow my tracks. It turned out to be Tom Boothe, another Saranac Lake resident. Unlike us, Tom knew where he was. Evidently, we got off trail before the fallen tree. The route we thought we intersected was actually the Esker Trail.

With that cleared up, we descended the trail to Jenkins Mountain Road, turned right, and followed the road a mile or so back to the VIC. Skiing the road was kind of a blah finish to the trip, but there were a few downhills and pretty scenes on the way. For a more scenic ending, you can leave the road and return to the VIC by the Heron Marsh Trail or a couple of snowshoe trails.

Not that I was complaining. I was happy to be skiing. Within a few days, the snow had melted. In late December, we were still waiting for the next snowfall. If the weather doesn’t change, we may end up skiing at the VIC a lot this winter. That’s not such a bad thing.  ■