Despite attempts to save it, Newton Falls paper plant shuts down for good, dealing a tough blow to a hard-pressed part of the Park.

THIS SUMMER, a Canadian company called Scotia Investments has been auctioning off parts of the old Newton Falls Paper Mill in the northwestern Adirondacks. It’s the latest painful chapter for a region of the Adirondack Park that has fought for years to maintain its old industrial economy.

“It’s tough, it’s really tough,” said Sherman Craig, an Adirondack Park Agency commissioner who owns a woodworking shop in Newton Falls and lives in nearby Wanakena. “After they cut up the papermaking equipment, it’s just a shell.”

Craig joined a half-dozen men in late July in the lobby of the mill’s mostly empty main headquarters for a public auction of roughly four thousand acres of timberland owned by Scotia. The company has declined to say whether the property found a buyer. That means more uncertainty for Terrance Roberts of Canton, president of the Trail’s End hunting club on paper-mill land for decades. “It’s a heartbreak,” he said. “My brother worked here for thirty-something years.”

If you drive through this remote region of southern St. Lawrence County, you can find vestiges of the thriving industries that once turned Newton Falls, Cranberry Lake, and Star Lake into boomtowns. The old Jones and Laughlin ore-processing mill, which closed in 1978, sits abandoned, its sagging blue buildings now occupying a contaminated brownfield site. The nearby Benson Mine, which first opened in 1895, is mostly idle, except for a small gravel-and-rock operation. 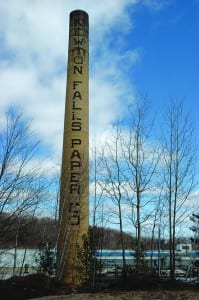 The rust-belt decline of this corner of the Adirondacks has been made more painful by the fact that it seemed for nearly a decade that the area might buck the loss of heavy industry that transformed the northern New York economy. Working with state officials in Albany, local leaders repeatedly found new buyers and investors who promised to reopen the paper mill.

In September 2002, then-Governor George Pataki traveled to Newton Falls for a townwide celebration when it was announced that paper-making would resume. “This is your victory,” he declared. “This is your accomplishment.”

“These people have been through a hard time,” said Stuart Belkin, head of a company called Belkorp Industries that promised to reopen the mill, in an interview that year with the New York Times. “So their optimism and expectations have definitely been kindled. It’s a serious responsibility, because people are certainly counting on a turn for the better.”

But that deal, like others that followed, fell through as paper markets sagged and foreign competition drove prices down. Chris Westbrook, chairman of the Clifton-Fine Economic Development Corporation, says this latest and final closure involving Scotia was particularly heartbreaking because the Canadian owners had seemed committed to the mill.

“When we found Scotia Investments out of Nova Scotia, we were all so very, very happy,” he recalled. “But then when the markets turned, you know, they had to close it down, and we were still hopeful that they would stay with it. But, lo and behold, they decided to liquidate that asset.”

The loss of industrial jobs has sent shockwaves through the towns of Clifton and Fine. “We had about five hundred men working here,” said George Persson, caretaker at the Benson Mine property. According to some estimates, the combined work force at the mines and the nearby ore mill once reached as high as 1,200.

He stood at the edge of what appeared to be a gorgeous pristine lake. In fact, it’s the old mine pit, a vast man-made quarry excavated in the hunt for iron ore. During the region’s heyday, Persson said, “the school district was about 1,200 kids at the time. Right now we’ve got 312 students.”

Westbrook said he hopes new uses can be found for these industrial sites. “My vision would be that it would be some kind of bio-energy facility, some kind of wood-products industry,” he said. “The value is that we have two industrial sites within the Park that are classified industrial sites [by the APA], and I think that’s really important and makes it helpful or easy for an organization to come in and develop a company there.”

One immediate question that faces the community is the future of the old forty-four-mile rail spur that once connected these operations to the outside world. Two years ago, New York State agreed to help refurbish the railroad, committing $10 million to the project. But with the mill liquidated, some have questioned whether the investment still makes sense. “We don’t want a railroad to nowhere,” Westbrook acknowledged. “However, we almost need that railroad to encourage new business to come in.”

Another troubling concern for local leaders is possible pollution at the Newton Falls mill. The buildings stand empty on the bank of the Oswegatchie River, and some people, including APA Commissioner Craig, say the plant—still owned by Scotia Investments—might contain asbestos and other hazardous substances. “So we’re worried that we’re going to have another J and L,” he said, referring to the decades-long struggle to clean up the abandoned steel mill.