Don’t expect the state Department of Environmental Conservation to reach a quick decision on the Sierra Club’s request to force landowners to remove a steel cable that stretches across Shingle Shanty Brook.

In a recent letter to the club, DEC Regional Director Betsy Lowe says the department plans to provide “a comprehensive response” to the request. “As you can imagine, this will take some time given the careful consideration required by the Department’s technical and legal staff, possible coordination with the State Office of the Attorney General, and the need to balance a variety of demands with limited resources,” she wrote on November 4. 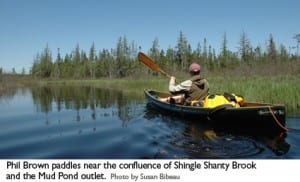 The Sierra Club contends that the public has a common-law right to paddle through a corner of a large tract of private land owned by the Friends of Thayer Lake, which is affiliated with the Brandreth Park Association. The association owns the recreational rights to the land and has posted no-trespassing signs to deter paddlers from using the waterways in question.

The club’s request was sparked in part by an article that appeared in the July/August issue of the Adirondack Explorer. In it, I described my two-day trip from Little Tupper Lake to Lake Lila. At one stage, I paddled on three connected waterways owned by the Friends of Thayer Lake: Mud Pond, the pond’s outlet, and a stretch of Shingle Shanty Brook. This enabled me to avoid a mile-long portage.

The Brandreth Park Association contends that the public doesn’t have the right to paddle these waterways. Since my article appeared, the owners have strung a rope across Mud Pond, put up additional no-trespassing signs, and installed two motion-sensitive cameras.

The Sierra Club contends that the chain, rope, and signs are an illegal blockage of a public canoe route.

Lowe’s letter was addressed to Roger Gray and John Nemjo, the co-chairmen of the club’s Adirondack Committee, and Charles Morrison, who is heading the committee’s public-navigation-rights project.

Click here for an earlier post that contains links to letters to DEC from the Sierra Club and Brandreth Park Association.

Click the link below for a PDF of Betsy Lowe’s reply to the club.