Home » Outtakes » Mountaineer’s New Sign Is A Work Of Art

When Matt Horner, one of the region’s best ice climbers, fell on a route at Chapel Pond last winter, he had to stop working for a while. For Matt, work is guiding and sculpting, usually in rock and metal.

Matt has recuperated well enough to resume his artwork, and his latest piece was unveiled Thursday evening at the Mountaineer in Keene Valley.

It’s a nine-foot ice ax modeled on the Piolet d’Or, awarded in France to a mountaineer each year. Horner’s giant ax is mounted on a truncated cedar tree mounted on a large boulder. The Mountaineer’s sign hangs from the ax’s shaft.

Horner welded the head and spike of the ax out of steel. Scotty McClelland, co-owner of the outfitting store, carved the shaft. He also found the cedar and the boulder.

Vinny McClelland, Scotty’s brother, gave a short speech before taking a woodsman’s ax to the old sign and felling it. He then unveiled Horner’s creation and the new sign, eliciting cheers and applause. The informal ceremony was attended by about twenty-five people, including local climbers.

Horner took a fifty-foot fall in February while leading an ice route called Rhiannon above Chapel Pond. He broke most of the bones in his face. The route was well within his ability, but he believes he blacked out due to a vitamin deficiency.

I wrote a profile of Matt that appeared in the Adirondack Explorer about a month before the accident. It conveys just how talented an ice climber he is and how much he loves the sport. 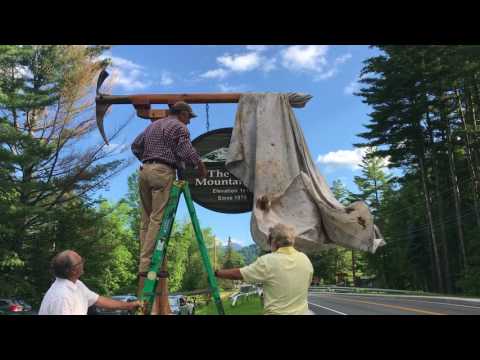