We should be hitting peak foliage soon. Last weekend, I climbed the slide on East Dix and saw lots of color, mostly yellow, in the forest. But what really caught my eye were the succulent red berries of the American mountain ash.

E.H. Ketchledge, in Forest and Trees of the Adirondack High Peaks Region, calls the mountain ash “one of our loveliest trees.” In June, it blossoms with clusters of white flowers. In the fall, the flowers transform into berries (actually, they are pomes, a false fruit) that resemble cranberries. The fruit can last into winter.

“A stalk of mountain-ash ‘berries’ lightly coated with fresh snow in October seems to mark the end of each growing season on the higher slopes,” Ketchledge writes. 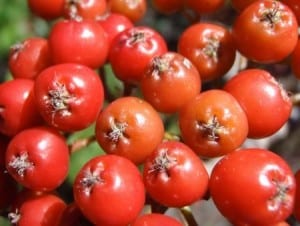 He also writes: “The fleshy seed is heavy, and it can travel great distances only via the stomach of the Canada jay or a few other birds.”

As its name suggests, the mountain ash grows on our upper slopes, along with balsam fir, red spruce, and paper birch.  But the name is misleading in one sense: this tree is not a true ash. Its narrow leaves, arranged in pairs along the branch, resemble those found on true ash trees, thus accounting for the common name.

As a story in the next Explorer will point out, an invasive insect, the emerald ash borer, threatens to destroy all the ash trees in the country. (Less than 5 percent of the trees in the Adirondacks are ash.) Fortunately, the insect does not attack mountain ash.