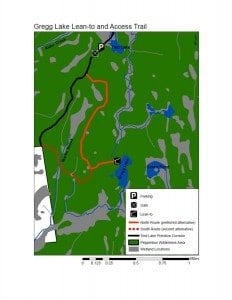 The 22,560-acre Pepperbox in the western Adirondacks is one of the smaller Wilderness Areas in the Park, but it also is one of the wildest. It has no lean-tos and only two miles of foot trails.

The State Land Master Plan observes that the lack of a trail system “offers an opportunity to retain a portion of the Adirondack landscape in a state that even a purist might call wilderness.”

Now the state Department of Environmental Conservation is proposing to create a 1.3-mile trail to Gregg Lake and build a lean-to at a primitive campsite on the lake.

The trail would start on the Tied Lake Primitive Corridor, a rough road that leads to an in-holding, and follow an unmarked path primarily used by anglers. DEC proposes to mark and maintain the path as a foot trail.

Since the Primitive Corridor is closed to motor vehicles, hikers and anglers will have to park at a barrier and walk 0.3 miles down the road to the start of the trail. Thus, the hike to the lake will be 1.6 miles.

As another option, DEC says it could mark and maintain another path that begins farther down the road. This path is a mile long and starts 1.2 miles from the barrier. Thus, the entire hike would be 2.2 miles.

DEC prefers the first option, saying it will facilitate the return of the second trail to natural conditions.

The Pepperbox Wilderness is located north of Stillwater Reservoir. Gregg Lake was added to the Wilderness Area after DEC wrote the tract’s management plan.

The trail and lean-to will require an amendment to the State Land Master Plan. The public has until May 8 to comment on the proposal.

DEC also is proposing to open an old logging road in the Jessup River Wild Forest to improve access to a parking area used by snowmobilers. Again, the public has until May 8 to submit comments to the Adirondack Park Agency.

Both proposals can be found on the APA website.

Comments can be emailed to SLMP_Comments@apa.ny.gov.