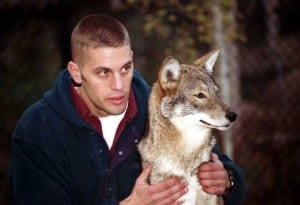 Jon Waylong dreamed of becoming a wildlife biologist. While still in high school, he began tracking coyotes around his hometown of Barnstable on Cape Cod. He went on to earn bachelor’s, master’s, and doctoral degrees, all related to coyote research. Now 34, he has written a book, Suburban Howls, and a number of professional articles on the coyote. Way has come to believe that the eastern coyote (the canid of the Adirondacks and elsewhere) is a distinct species, separate from the western coyote and from wolves. We contacted him by e-mail and asked him the following questions.

Incidentally, Jon will be speaking this Saturday, May 30, at the Adirondack Wildlife Refuge and Rehabilitation Center near Whiteface Mountain. For more information, contact Wendy Hall at wendy@adirondackwildlife.org.

What fascinates you about coyotes?

I love predators, and I am especially fascinated by eastern coyotes because (1) they are so successful in a variety of ecosystems; (2) they live in my hometown on Cape Cod; (3) relatively little is known about them; (4) they are a hybrid with red/eastern wolves.

Why do you think the eastern coyote is a separate species?

Because when analyzed genetically they form a distinct group from their parent species: western coyotes and red/eastern wolves (not gray wolves).

If it is a separate species, what is the biological significance of this?

Nothing much. The eastern coyote does what you would expect of a thirty-to-forty-pound wild dog. It is bigger than western coyotes but smaller than all wolves, including red/eastern wolves.

What does it mean for the regulation of the coyote?

Whenever I hear the word regulation or management, all I can think of, unfortunately, is killing them. State fish-and-game agencies, to my amazement, are still run just about exclusively for hunters and maximal utilization/exploitation.

Is the eastern coyote part wolf? If so, which wolf?

As mentioned above, it is a hybrid with the red or eastern wolf-formerly Canis rufus (red wolf), now called Canis lycaon. This is the wolf found in Algonquin Provincial Park in Ontario. Historically, it probably lived from the southeastern U.S. to southeastern Canada.

How did our coyote come to hybridize with the eastern wolf?

They hybridized with the wolf in northern New England and New York and in southern Canada, most likely as wolves were getting exterminated at the end of the nineteenth century and as coyotes started colonizing the east. Habitat change due to agriculture and cutting down forests and the lack of competition (few wolves) made the east more attractive to coyotes. Eastern wolves are actually more closely related to coyotes than they are to gray wolves. It is logical that the eastern wolves would have mated with the coyotes if the wolves’ numbers were low. At some point, the hybrids started breeding with other hybrids to form the distinct group we know of as eastern coyotes. They then subsequently colonized all of the Northeast.

Can coyotes and wolves co-exist in the Northeast?

It depends. I think red/eastern wolves would hybridize with eastern coyotes if state fish-and-game agencies allow them to return. I think that if gray wolves were restored in numbers (i.e., reintroduced), they would exclude eastern coyotes from the wolf’s core areas.

Do you think wolves are already living in the Adirondacks and/or New England?

No. Any “wolves” are likely hybrids just as all eastern coyotes are and could be called coywolves. Any eastern wolves that make it to the Adirondacks or New England are probably killed or mate with coyotes (adding a little more wolf to the already existing hybrid gene pool). By the way, the geneticists say the eastern coyote is relatively pure-i.e., they match with each other genetically, but not with western coyotes or red/eastern wolves.

What is your book Suburban Howls about?

It’s a 300-page account of the experiences and findings of a biologist (me) who has studied this predator in urbanized environments.