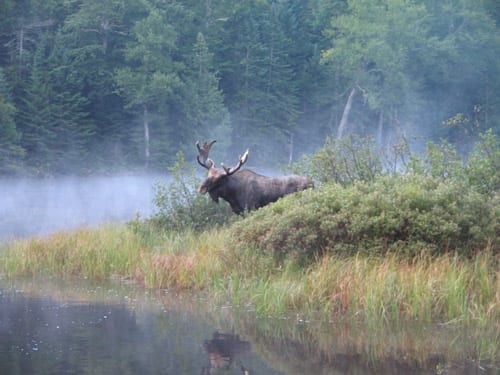 A friend of the Explorer just forwarded these photographs of a bull moose taken on Upper Ausable Lake.  He also forwarded an e-mail from Ron Hall, who described the recent encounter. Hall was rowing a guide boat on the lake–on “a perfect morning, cool, mist”–when he heard clunking and splashing sounds near a boathouse. “Suddenly a large bull moose stepped out from the overhanging cedar branches. I spun the guide boat around … face to snout … with Bullwinkle. About 20′ away.” Adam Whitney took the photos. 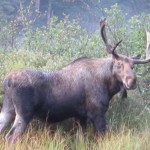 Moose vanished from the Adirondacks in the nineteenth century, but they have made a strong comeback over the past three decades. The state Department of Environmental Conservation estimates that more than five hundred moose now reside in the Adirondack Park.

As the population has grown, sightings have become more common. My son, Nathan, and I spotted a bull moose on Route 30 north of Long Lake last year. Nevertheless, it’s still unusual to see a moose and even more unusual to get it to pose for pictures.

By the way, please don’t go looking for this moose. The Upper Ausable Lake is private, part of the Adirondack Mountain Reserve. The public is allowed on some foot trails in the reserve. 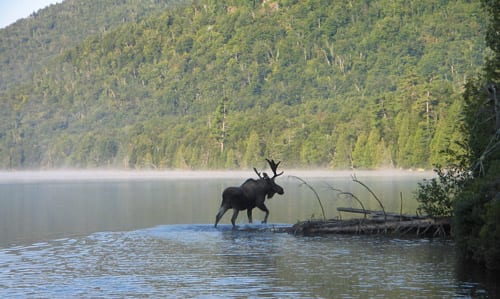