For the past week, Adirondack birders have been marveling about a brown pelican first spotted on Fourth Lake in the Old Forge-Inlet region.

Normally, brown pelicans reside along coasts in more southern climes. They breed as far north as Virginia in summer and live year-round along the Gulf Coast. It’s the state bird of Louisiana. 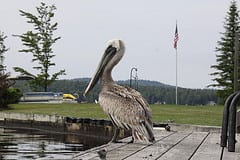 John M.C. Peterson, one of the authors of Adirondack Birding, says this is the first brown pelican seen in this neck of the woods. Peterson keeps records of bird sightings in the Adirondack-Champlain region for the New York State Ornithological Association. As defined by the association, the region encompasses most of the Adirondack Park and some territory outside it.

Carolyn Belknap, an avid birder with a camp on Fourth Lake, took several photos of the pelican, one of which appears here. She had heard about the bird from e-mails on the Northern New York Birds online-discussion group.

“My encounter was pretty much dumb luck,” she wrote the Explorer.  “I was kayaking with my ten-year-old niece and two visitors. My niece suggested we go across the lake, so we paddled to Eagle Creek, a small creek off of the north shore of Fourth Lake right across from our camp. The pelican was on a dock at the entrance to the creek, waiting for us. I was fortunate to have my good camera with me. The pelican was standing so still, that at first I didn’t register that it was alive!”

A few days after the initial sightings, the bird turned up on Lows Lake. Jeff Nadler, whose bird photos often appear in the Explorer, said the bird jumped onto the kayak of a friend’s daughter, apparently hoping for a handout.

The pelican is banded, so birders are hoping to find out where it came from.