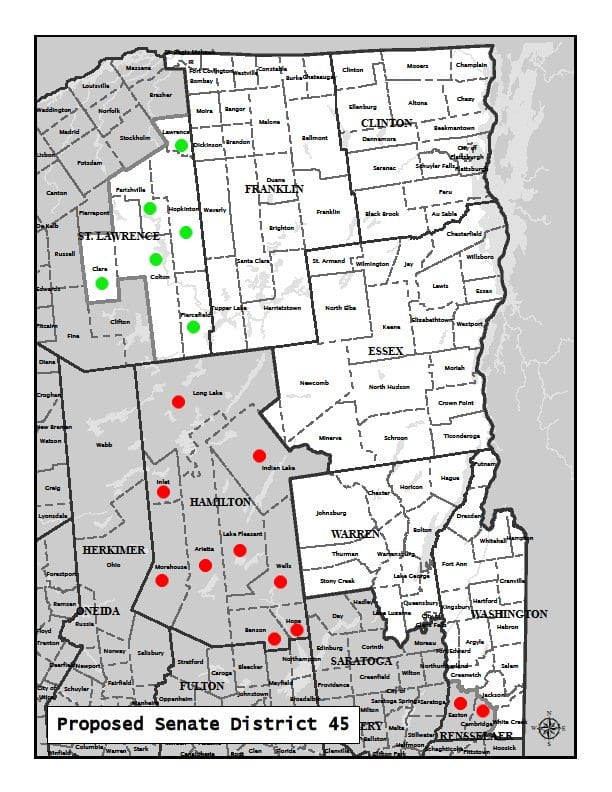 State Senator Betty Little will no longer represent Hamilton County, one of two counties wholly within the Adirondack Park, under a redistricting plan released today.

Little, a Republican, will continue to represent Adirondack communities in Essex, Franklin, Clinton, Warren and Washington counties—all located in the eastern or northern Adirondacks. She also will pick up six towns in St. Lawrence County, five of which are in the Park. (Essex County is the other county located entirely in the Park.)

Dan MacEntee, Little’s spokesman, said the senator is disappointed to lose Hamilton County, as well as two towns in southern Washington County, but overall she is satisfied with the redistricting proposal.

“Comparatively, when you look across the state, this is a district that changes very little,” MacEntee said.

MacEntee expects that the issues in the St. Lawrence County towns are similar to those in Little’s current district.

Veteran Senator Hugh Farley, a Republican from the Schenectady area, would pick up Hamilton County under the redistricting plan as well as the Adirondack towns of Ohio and Webb (home to Old Forge) in Herkimer County. Even so, it appears Little would still represent the majority of Park residents.

The map shows Little’s proposed district. I added green dots to the towns she would pick up and red dots to those she would lose.

The plan must be approved by the state legislature to take effect. Governor Andrew Cuomo would have a chance to veto it.