I went to Albany this past weekend to attend the Adirondack Mountain Club’s annual Presidents’ Dinner and pick up an award for the Adirondack Explorer. 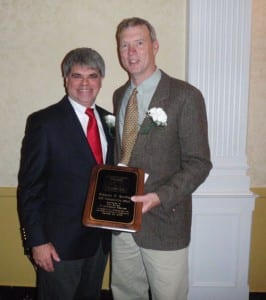 ADK gave me the Eleanor F. Brown  Communication Award, which is named after its first recipient, who several years ago published a marvelous reference work titled The Forest Preserve of New York State: A Handbook for Conservationists.

Although my name appears on the plaque, the award is a tribute to everyone at the Explorer, starting with Dick Beamish, the founder, and his wife, Rachel Rice; Tom Woodman, who last year succeeded Dick as publisher; Sue Bibeau, our designer; Betsy Dirnberger, our ad director; Andreas Mowka, our subscription manager; and Debra Stover, our office manager. They all contribute to our success.

Some readers may have the impression that all we do at the Explorer is hike, paddle, ski, bicycle and so on, but the unfortunate truth is that we, like many people, spend most workdays at the computer. Putting out the Explorer is hard work, and so it’s nice to be recognized. On behalf of our staff, thank you, ADK.

Other honorees included Marilyn Gillespie, who received the Trailblazer Award for her work for the club over many years, and David Pisaneschi, who received the Conservation Award for his advocacy.  The President’s Award went to Neil Woodworth, the club’s executive director.

Before the dinner, I was lucky enough to be able to chat with Eleanor Brown. She told me she is thinking of updating The Forest Preserve. Let’s hope she does.