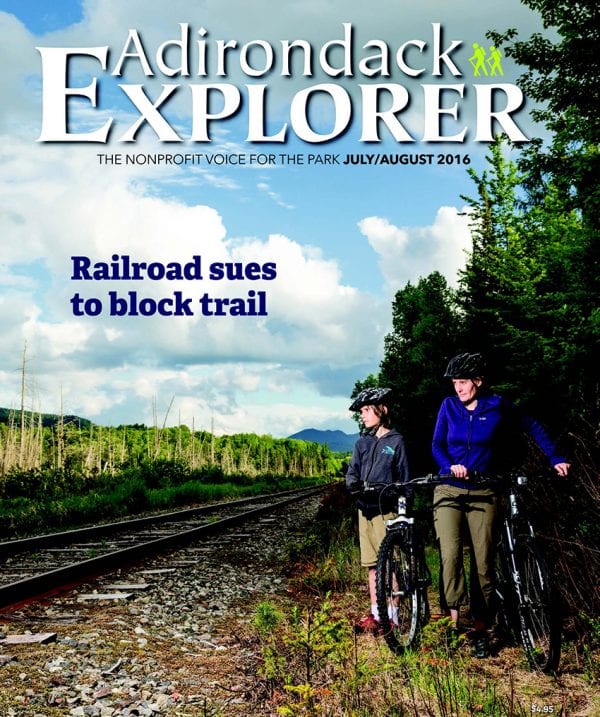 Your cover for the July/August issue of the Adirondack Explorer was disgraceful in that it seemed an overtly staged, slanted, and shortsighted depiction of a perceived wrong. It was also a demonstration that the Explorer continues to be anything but balanced regarding the rail-trail issue. Phil Brown’s article was only slightly more balanced.

Ripping up these rails is a bad decision any way you slice it. There are hundreds of biking and snowmobiling options in the Adirondacks but only one rail line through the heart of it. In its present form the lightly used line supports two growing businesses (Adirondack Scenic Railroad in Old Forge and Lake Placid and Rail Explorers USA out of Saranac Lake) and provides a promise of future rail access to all. The line also acts as a wildlife corridor and does little to degrade resources. A new rail trail would negatively impact these resources much as any new road would.

It would be helpful to remember that the Adirondacks were created not so much as an amusement park for residents and visitors but for preservation of forestry, river, and wildlife resources for future generations. It’s not just about us! Wilderness and remoteness are also a draw supporting local businesses, outfitters, restaurants, and motels.

As such, it would be helpful if the Adirondack Explorer would truly start to act as a nonprofit voice for the Adirondacks in all its aspects, and not just as a voice for a select few.

In conclusion, I would hope that the rail supporters’ lawsuit succeeds where reason and foresight have failed and that the rails are left intact.