The FUND for Lake George has presented a Water Quality and Clarity Protection Grant of $50,000 to the Town of Bolton. This funding will be applied toward upgrading the Bolton WastewaterTreatment Plant, specifically for the installation of a Woodchip Bioreactor demonstration project that will reduce the levels of nitrates entering Lake George. This measure was a key recommendation of the Lake George Waterkeeper’s Bolton Bay Water Quality Assessment report. The grant award is among the priority investments being made by The FUND to complete The Model for Enduring Protection of Lake George. 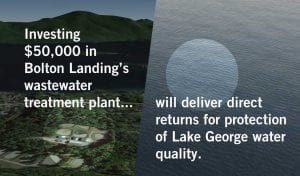 Abstract to the Bolton Bay Report:The Bolton Wastewater Treatment Plant (Bolton WWTP) is located in the Town of Bolton, Warren County, New York, along the western shoreline, within the Lake Champlain drainage basin, and appears on the United State Geological Survey (USGS) 15 minute quadrangle map, Bolton Landing, New York. Treated effluent from the facility discharged to infiltration sand beds on the property for final polishing becomes incorporated into the local ground water. The individual sand beds used for effluent discharge determine whether the resulting ground water enters the Mohican Road Tributary or Stewart Brook watersheds.A comprehensive monitoring program that focused on the Bolton WWTP, its effect on local ground water and the Mohican Road Tributary and Stewart Brook watersheds was initiated in April 2016 and completed during May 2017. The program included water sample and field data collection from ground water wells, seepage streams, the Mohican Road Tributary and Stewart Brook, as well as an evaluation of recent treatment plant SPDES permit DMRs.There were 20 field excursions and 196 water samples collected during the 14‐month program period from a total of 15 sampling stations. Sample collection and sample processing were conducted according to standard US EPA protocol and samples were submitted to the Darrin Fresh Water Institute Laboratory, which is certified by the New York State Environmental Laboratory Accreditation Program (ELAP).The results from the monitoring program reported herein corroborate the results from studies conducted by Fuhs in the early 1970s and the Rensselaer Fresh Water Institute during the early 1980s. That is, the treatment plant effluent becomes incorporated into the local ground water and moves toward the lower elevations, entering the Mohican Road Tributary and Stewart Brook, which eventually flow into Bolton Bay (Lake George). The magnitude of the nutrient loading problem that has occurred during the previous four decades is analyzed and discussed in the report. There are recommendations presented in the report that, if followed, will minimize the current impact of the Bolton WWTP on water quality in the region until sources of funding can be located and operational upgrades can be implemented at the treatment facility.

A recent drinking well/groundwater study—a collaborative effort of the Adirondack Watershed Institute at Paul Smith’s College and the Lake George Waterkeeper—found wells near state highways contain much higher levels of sodium and chloride than wells tested along local roads or where no roads are present. The findings, along with the success of the Lake George Salt Reduction Initiative, are among the things that persuaded New York State’s Department of Transportation to launch a pilot program to reduce the application of road salt in the Lake George watershed.