“Across New York, DEC Forest Rangers are on the front lines helping people safely enjoy the great outdoors,” said DEC Commissioner Basil Seggos. “Their knowledge of first aid, land navigation, and technical rescue techniques are critical to the success of their missions, which take them from remote wilderness areas with rugged mountainous peaks, to white-water rivers, and throughout our vast forested areas statewide.”

Town of Johnsburg
Warren County
Swiftwater Rescue Training:
On June 4 and 5, 30 Forest Rangers and Assistant Forest Rangers from Region 5 participated in a swift water rescue training on the Hudson River in Warren County. Rangers, certified by the American Canoe Association as Level 4 Swift Water Rescue Instructors, led the training. Boating skills, water hydrology and hazards, boat base rescues, swimming rescues, cinches, and pins were all practiced. At the conclusion of the training, the participants were certified as Level 3 Swift Water Rescue Technicians by the American Canoe Association. The training is essential for Forest Rangers to safely respond to the technical challenges encountered during swiftwater rescue missions. 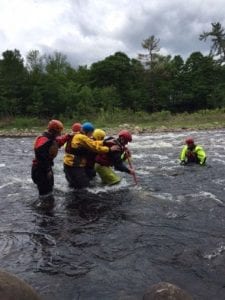 Town of Keene
Essex County
Wilderness Search: On June 6 at 9:22 p.m., Ray Brook Dispatch received a request for assistance in locating two 21-year-old men from Canada who became separated from a hiking group while descending Giant Mountain. Forest Ranger Mark St. Claire arrived on scene at the Chapel Pond entrance to Giant Mountain and hiked to where Giant Mountain Trail meets the Roaring Brook Trail with negative results. At 12:30 a.m., he requested an additional Ranger. Ranger Robbi Mecus responded and hiked in on the Roaring Brook Falls Trail and looked for the subjects on the cut off trail near the Washbowl. At 1:39 a.m., Ranger Mecus established voice contact with the hikers near the waterfall. The pair was located in good condition 50 yards off trail. The hikers were then escorted out through the Roaring Brook Falls Trail and reunited with their hiking party at 2:12 a.m.

Town of Hunter
Greene County
Wildland Search: On June 6, two campers from Canada left North-South Lake Campground at approximately 8 p.m., to hike to Sunset Rock. When the campers hadn’t returned to the campsite by 1:30 a.m., their friend hiked to Sunset Rock and called for them, but was unable to get a response. The friend then reported her friends overdue to the campground staff at the caretaker’s cabin. Two Rangers responded and began to sweep the trails from the campground toward Sunset Rock. A Ranger established voice contact with the two hikers near Ashley Falls. The pair were lost in the woods between trails and decided to stay the night since they did not have lights. It became dark shortly after they started hiking and the pair quickly lost the trail and never made it to Sunset Rock. Rangers escorted the missing hikers back to their campsite.

Town of Long Lake
Hamilton County
Wildland Rescue: On June 7 at 8:40 a.m., Ray Brook Dispatch received a call from a SUNY Cortland hiking group leader with concerns of a hiker the group encountered at the Cold River lean-to #4 on the Northville-Placid Trail. The hiker, a 63-year-old male from Sunderland, Mass., seemed disoriented and distressed. He advised the passing group he would be hiking to Plumley Point that day. Rangers contacted the reporting party and after evaluating the circumstances, agreed the subject needed assistance. Rangers planned to intercept and retrieve the subject. Forest Rangers Jim Waters and Robert Zurek located the hiker at Shattuck Clearing. He was given food and water and escorted out 2.5 miles to the northern boundary of Huntington Forest. Forest Ranger Lt. Brian Dubay met the hiker and Rangers and transported the hiker to a hotel in Ticonderoga near the Amtrak station. The hiker requested no further medical care.

Town of Fort Ann
Washington County
Wildland Rescue: At 1:36 p.m. on June 7, DEC Ray Brook Dispatch was contacted by Washington County 911 requesting assistance with a 69-year-old female hiker from Cleverdale. The hiker was on Sleeping Beauty Mountain, approximately 1.5 miles from Dacy Clearing with an unstable leg injury that occurred during her descent from the summit. Forest Rangers Anthony Goetke and Jaime Laczko and West Fort Ann Fire Department and EMS personnel responded to assist. After assessing and stabilizing the injured leg, Forest Rangers packaged the hiker into a litter and carried her to the trailhead. She was then transported by EMS to the Glens Falls Hospital for further treatment.

Town of North Elba
Essex County
Wildland Rescue: On June 8 at 6:58 p.m., Ray Brook Dispatch received a request for assistance for a 61-year-old female from Cape May, N.J., who fell while hiking Algonquin. The subject reported injuries to two of her extremities. Coordinates provided by 911 placed the subject near McIntyre Falls. Ranger James Giglinto hiked in to assess the subject and reached her at about 9 p.m. Additional Rangers were requested for a carry out. After the hiker’s injuries were evaluated and stabilized, she was packaged in a litter and carried to a waiting off-road utility vehicle. From there, she was transported slowly down the mountain to an awaiting Lake Placid Ambulance. The subject was turned over to Lake Placid Ambulance at 12:50 a.m., and transported to AMC Saranac Lake for treatment.

Town of Hunter
Greene County
Wildland Rescue: On June 9 at approximately 1 p.m., Greene County Dispatch received a report of an injured 39-year-old female hiker from Oakville, Conn., on the blue trail near Kaaterskill Falls. Forest Rangers Christine Nelson, Katherine Fox, and Chris DiCintio responded, along with Assistant Forest Rangers Leslie Green and Aaron France. Haines Falls Fire Department, Tannersville Rescue Squad, and a Windham Ambulance also responded. The hiker reportedly injured her ankle near Layman’s Monument after taking a misplaced step on a rock. The Forest Rangers provided initial patient care and splinted the hiker’s ankle. Rescue personnel and Rangers then packaged her into a litter. The Rangers then carried the hiker to a waiting off-road utility vehicle and driven to South Lake. The injured hiker was evaluated by EMS personnel. She declined transport by ambulance to seek further treatment on her own. 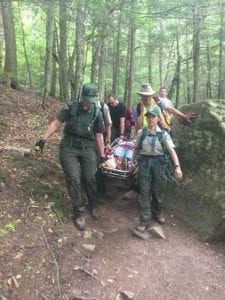 Town of Wilmington
Essex County
Wildland Rescue: At 2:41 p.m. on June 9, Ray Brook Dispatch received a transferred called from Essex County 911 regarding a 50-year-old woman from Endicott who had fallen while hiking with her dogs on the Whiteface trail. The hiker reportedly had fallen and hit the back of her head and briefly lost consciousness. Two Rangers responded and located the subject approximately 200 yards from the trailhead. Rangers evaluated the hiker and assisted her out to the trailhead. The subject was then assessed by Wilmington EMS and declined any further medical treatment. All units were clear at 4:11 p.m.

Town of New Scotland
Albany County
Recovery: On June 9 at approximately 7:40 p.m., Forest Ranger David Nally was notified by the New York State Park Police that human remains were located in Thatcher State Park. Ranger Nally responded, but due to darkness and dangerous terrain, was directed to wait until the next morning to extricate the body. On Sunday, June 10, State Parks staff, three Forest Rangers, and the Albany Medical Examiner removed the body, which was below the Indian Ladder Trail. New York State Park Police investigators are investigating this case.

Town of Hunter
Greene County
Wildland Rescue: On June 10 at approximately 12:30 p.m., while patrolling Kaaterskill Falls, Assistant Forest Ranger Aaron France encountered a 15-year-old female from Kingston with an ankle injury at the base of the stone stairs. The subject had been hiking with her family and reportedly rolled her ankle on a loose rock after stepping off the trail toward the lower pool, feeling a popping sensation at the time of the injury. While Assistant Forest Rangers France and Leslie Green provided initial patient care, Rangers Katherine Fox and Christine Nelson responded. Rangers applied a splint to stabilize the patient’s left ankle. She was then assisted to the trailhead and was out of the woods at 2:30 p.m. The patient’s father refused ambulance transport, electing instead to transport the subject for further medical care.

Town of Denning
Ulster County
Wildland Rescue: On June 10 at approximately 10:50 a.m., DEC Central Dispatch received a call reporting a 50-year-old male hiker from Catskill at the Biscuit Brook lean-to with an ankle injury. Forest Rangers Robert Stratton and Kevin Slade responded and reached the hiker at 1:30 p.m. The Rangers assessed his injury and determined the hiker could begin walking out under his own power. He was met by a local fire department off-road utility vehicle, which transported the hiker the remaining distance to the trailhead, where he sought follow up care on his own.

Be sure to properly prepare and plan before entering the backcountry. Visit DEC’s Hiking Safetyand Adirondack Backcountry Information webpage for more information.