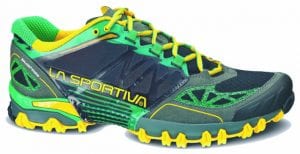 Thinking of taking up trail running? The most important piece of equipment is, of course, your shoes.

Drew Haas, an avid trail runner and manager at the Mountaineer in Keene Valley, went over some options with us for the July/August issue of the Adirondack Explorer — with this caveat: “What works for one doesn’t necessarily work for the next.”

In general, trail-running shoes are more durable and more protective than street-running shoes. Trail shoes should have a protective plate in the forefoot so you don’t feel every rock you land on.

“They hold up better and offer more protections, stability, and better grip on mud and rocks,” Haas said.

Don’t wear street-running shoes on trails because there’s more chance of getting hurt.

Minimalist: These shoes offer almost a barefoot sensation. Haas says they aren’t carried at the Mountaineer because they’re not suitable for most Adirondack terrain.

Lightweight: Contain underfoot protection and some stability and stiffness. If you’re running five to ten miles, Haas says, these are a good option. Lightweight doesn’t just refer to the actual weight of the shoe, but also the material characteristic and ruggedness, he said.

Midweight: This shoe has more structure, also with underfoot protection. It’s good for running rugged, uneven terrain and going up into the peaks. Some have breathable mesh; others are waterproof. Most runners gravitate to a waterproof shoe because it feels warmer.

But Haas warns that if water gets inside, it can’t get out as it can with mesh. There are heavier-weight, more rugged shoes, but few runners chose these, Haas said.

Treads: Look for an aggressive lug if you will be running in mud or sandy surfaces. For rock, you want a stickier compound that will grip the rocks.

But the most important feature to consider, Haas says, is the shoe’s fit.

“Try it on and get an idea of what feels like enough or too much,” he said. “You want a good, secure fit but enough room in the toes for when you’re coming downhill. You need some buffer.”

Read the full article in the most recent Explorer: Subscribe here or get the app here.