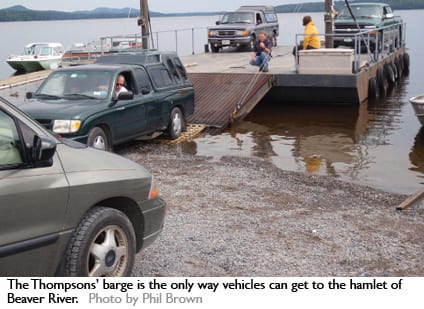 If you’re looking for the most isolated community in New York State, you might find it in Beaver River. The itsy-bitsy hamlet lies deep in the woods in the western Adirondacks, about twenty miles from the nearest community of any size. To get there, you drive up a dirt road until it ends at the western edge of Stillwater Reservoir and then take a boat or barge across open water.

For generations, this has been the way most visitors and owners of 120 camps reached the community (in winter, it can be reached by snowmobile). But that access is threatened by a disagreement between the state and the Thompson family, which accounts for five of the nine year-round residents of Beaver River.

The Thompsons—brothers Scott, Rusty, and Mark and their families—operate the rustic Norridgewock III inn and restaurant in Beaver River, along with several water taxis and a metal barge that carries cars, trucks, and other heavy equipment. The taxi ferries passengers about six miles to Grassy Point near the hamlet. The barge, however, cannot navigate that far up the shallow reservoir. It lands at the start of a dirt road that leads, after more than five miles, to Beaver River.

The hamlet, which is less than a square mile, has phone lines but no electricity. Propane, solar, and/or gasoline power most homes. That means delivery trucks and repair vehicles need to be floated in when needed.

“We’ve been fighting for access for generations,” said Scott Thompson, who is fifty-six. “The larger issue is there’s no land access to Beaver River.”

The Thompsons have operated their water taxis and barge service from the boat launch at the other end of the reservoir for decades. But now the state Department of Environmental Conservation (DEC) has denied them a permit to continue using the launch for their business. 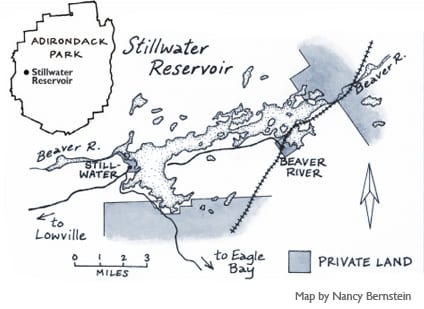 The reason: the boat launch is on the state-owned Forest Preserve, where most commercial activities are forbidden, and DEC contends the Thompsons have gone too far in their use of the launch for a private venture.

To understand what led to this situation, it helps to know the history of Beaver River. Thompson’s family first came here in the 1880s to hunt and trap. At the time, a dirt road connected them to the rest of humanity. In the 1890s, the railroad heading from Utica to Lake Placid went right through Beaver River, spurring a growth in population.

In 1924 the state built a dam on the Beaver River to control flooding and generate power, and the new reservoir drowned the road that led to the hamlet. When the train stopped running in the 1960s, Beaver River was further cut off (although by then most folks had stopped using the train in favor of water transport).

The Thompsons have endured other access problems. About nine years ago, the family could not rely on water transport after the state drained the reservoir to refurbish the dam. When that happened, the family used a “high-rail” pickup truck—a vehicle equipped to ride the train tracks—to get in and out of Beaver River. When the state tried to ban the contraption, the Thompsons fought in court and won the right to use the rail line until the reservoir was refilled later that year.

The DEC says the current situation is due to the Thompsons’ taking liberties with state access.

Stephen Litwhiler, an agency spokesman, said DEC had been issuing the Thompsons a permit each year to dock the barge at the boat launch, which is also used by day-use boaters and campers. But in recent years officials were disturbed by how much the Thompsons had taken for granted, he said.

The Thompsons had always kept an old wooden barge floating at the site to load and unload passengers on their water taxis. But Litwhiler said “their use of state land at Stillwater has grown.”

Today, the Thompsons operate three water taxis and one tour boat—a pontoon boat big enough for fifty people. Also, they had set up a second barge as a dock, which included a five-hundred-gallon fuel tank they use to fill their boats.

Plus the metal barge used to ferry vehicles.

“All of this use of state land and the commercial aspects is way outside what we were allowing under the temporary revocable permit,” Litwhiler said.

In addition, the loading and unloading of the metal barge—used to ferry cars or trucks to Beaver River—was keeping day-users from launching or pulling out their boats, he said.

Thompson, however, contends that the barge is usually parked away from the boat-launch ramp. He adds that the barge service actually helps prevent lines since many Beaver River residents—as many as eighty on a holiday weekend—put their cars on the barge instead of launching boats.

“We’re cutting way down on the state’s parking problem at Stillwater,” he said.

“We’re taking all these cars out of the equation.”

Last year, the Thompsons operated their boats and barge without a permit but were not ticketed by DEC. State officials are now considering fining them for last year and in the future if an agreement is not reached.

“We’re trying to work with them,” Litwhiler said. “That’s what we’re hoping to resolve without having to go with an enforcement action.”

Litwhiler wouldn’t say what kind of agreement would resolve the situation.

Meanwhile, the state is also banning Beaver River residents from keeping their trailered boats parked at the boat launch for more than a few days.

Thompson said the ban goes against a long-standing practice.

“It was sort of an understanding that … people who had camps on Beaver River would park their boats there for a week rather than trailering them home each weekend,” he said, adding that towing boats back and forth on the road wastes fuel.

“I understand this is out of the norm,” Thompson said. “But the situation was really created when the state built the reservoir.”

Over the past few decades, there has been talk about building a dirt road to Beaver River, and a route paralleling the train line was even surveyed and flagged, Thompson said. But such a project would cost millions, an expenditure that the state is not likely to incur given its financial crisis.

While the Thompsons and state officials continue to negotiate, Beaver River residents wonder how they’re going to get to their homes after the ice melts this spring.

“If there’s no way to get in or get out, the place will become a ghost town,” said Dick Searles, who owns a camp in Beaver River where he lives with his wife, Phyllis, for three months each summer.

To get to the camp, he and his wife drive from their year-round home in Ohio to Stillwater, where they meet the Thompson barge. Their car is floated across the reservoir to another road, which they drive for six miles to their two-bedroom home.

“It’s very important,” he said of the boat service. “If they take that away from us, our home here would be worth nothing.”