A coterie of climbers tames the cliffs at one of the wildest, remotest, and most sublime locales in the High Peaks.

Four and a half hours after our 4:30 a.m. departure from the Garden trailhead in Keene Valley, my two climbing partners and I dropped our packs and looked around. We were surrounded by cliffs: free-standing pillars, tiered walls, slabby slides, and vertical stone faces, some more than three hundred feet high. There were caves, hidden talus fields, and giant fins of rock. Vertical cracks abounded.

I gaped in wonderment at one of the most remote and beautiful rock-climbing destinations in the Adirondacks.

“There are so many lines here,” I remarked. “That’s what I’ve been telling you,” said Kevin “MudRat” MacKenzie.

Welcome to Panther Gorge. Located deep in the Adirondack High Peaks, the gorge is reached by hiking about eight miles on marked trails, followed by a twenty-minute bushwhack on a barely discernible herd path. You gain about three thousand feet in elevation from the trailhead.

Panther Gorge lies between the summits of Mount Marcy and Mount Haystack, the highest and third-highest peaks in the Adirondack Park. While many have peered into the gorge from above, few have stood below its sweeping walls of stone. Most hikers would consider the gorge inaccessible—filled with blowdown and brush that’s as difficult to push through as barbed wire.

But a small group of dedicated rock climbers has turned the cliffs of Panther Gorge into one of the Adirondacks’ most majestic climbing areas. Its steep, overgrown, discontinuous walls now harbor more than two dozen routes in the moderate 5.7 to 5.9 range, with the potential for many more. New routes are put up almost weekly. Some are short, such as a forty-foot ascent of a detached pillar. Others are up to six hundred feet high. There are also a handful of ice-climbing routes, including the multi-pitch classic Agharta, probably the most well-known climb in the gorge.

MudRat, the nickname by which MacKenzie prefers to be known, has helped pioneer a new climbing era in this wild cirque, along with two veteran Adirondack climbers, Adam Crofoot, a contractor and property manager, and Bill Schneider, a nurse. Other friends, including Allison Rooney, also occasionally sign up for the arduous journey.

As of this writing, MacKenzie has made more than twenty-five trips into Panther Gorge, including this one with me. Crofoot, the strongest climber in our party, joined us on the adventure.

“This is just home,” said MacKenzie. “The tranquility, the challenge. The fact that it’s uncommon to want to come back here. It’s kind of fun to unwrap the mystery.”

Before the twenty-first century, there were only two rock routes in Panther Gorge: Jim Goodwin’s ascent up a slide in 1936 with two teenagers and a 1965 route called Panther’s Fang.

“It’s a wild place that stories are made of,” said Schneider. He got interested in the place after speaking to other climbers over the years, though he never met a soul who had actually been there. He and Crofoot made several first ascents in the gorge in 2003, but they didn’t get serious until meeting MacKenzie a decade later.

“It was like a big question mark,” said Schneider. “Nobody knew what was back there, and it kind of intrigued me and drew me to it.”

Crofoot hadn’t been expecting much on his first visit, but he was in for a surprise.

“My first assumption was everything would be hopelessly dirty and not worth the effort,” he recalled. “It turned out to be totally false—the rock is totally clean. … It was pretty impressive.”

Panther Gorge has long been regarded as an almost mystical place in the High Peaks landscape. Seneca Ray Stoddard, the celebrated photographer and writer, described it in an 1891 book as “one of the wildest places in the Adirondacks.” In his 1869 book The Indian Pass, Alfred Billings Street described an ascent of the gorge:

Gloomier scowled the ravine, and narrower it grew, while the rocks completely filled it. Yet above and through them I could see that the tortured mountains had at last locked themselves in a Titan struggle, falling upon their sides to do so. The gorge was at an end, a majestic cul de sac. … It seemed as if a mighty horror brooded over it; as if some demon made within it his blank and scowling lair.

On my visit, the view was as good as Street’s, although no demon lurked. Far away and far above us, visible only as tiny silhouettes against the sky, were hikers on the top of Mount Haystack. With the sun shining and only a few black flies in attendance on this late May morning, the immense chasm seemed less a brooding place than an alpine treasure—an adult playground, waiting to be explored.

After taking in the scene, we walked down a grassy slope and pushed through some brush, at one point using a fixed rope to move past an exposed stone corner, until we reached a swath of unclimbed rock on the Marcy side of the gorge. Much of the cliff in the vicinity was covered in water streaming down from the forest above, but this particular line was dry. It followed a crack system that climbed a tower-like feature, then disappeared over an overhang. Our first challenge of the day.

Crofoot, taking the lead, assembled his climbing gear, tied his harness into the rope, and began to climb. The ascent was easy at first but steepened as he approached the crack. He moved up carefully, thumping on flakes with the heel of his hand to test for soundness. Finally, he reached a ledge. I went next, followed by MudRat.

The crux, or hardest part, came on the second pitch, where the difficulty shifted from 5.7 to a single, difficult move that Crofoot rated 5.9. We continued past a dirty overhang and onto a bush-covered ledge. There, we untied and relaxed.

“What did you think?” MacKenzie asked Crofoot.

“Some sections of good climbing, interspersed with grime and loose nastiness,” he replied.

Crofoot would later name the 350-foot route Pioneer Anomaly. The name refers to an obscure astrophysics problem and to the pioneering efforts to climb unexplored rock. Climbers, along with being fearless, also have a strange sense of humor.

We rappelled down to seek a second line.

Considering MacKenzie’s passion for climbing, it’s ironic that he was once deathly afraid of heights. A Westchester County native, MacKenzie, now forty-six, moved to Upper Jay in 2003 and works as an associate registrar at St. Lawrence University. He began making a name for himself in hiking circles by spending long days slide climbing or bushwhacking in the High Peaks, often hitting several peaks and slides in a day.

But then he discovered technical climbing. Now he spends much of his time with more experienced leaders, climbing rock or ice routes all over the mountains. For the last three years, his main focus has been Panther Gorge. He was introduced to Crofoot by Don Mellor, a well-known climber and guidebook writer who lives in Lake Placid.

Mellor, who has been climbing rock in the Adirondacks for forty years, has been in the gorge once but never climbed there. He has no plans to do so anytime soon. Nevertheless, he heartily approves of the exploits of MudRat and company.

“The Adirondacks needs its mythic aura, which is rubbing smooth,” he said. To Mellor, the gorge offers a welcome counterexample to the trend toward user-friendly climbing, with minutely detailed guidebooks, computer apps, online forums, and GPS wayfinding technology. Where, he asks, is the adventure?

“There has to be a place that isn’t all easy. There is real happiness to be found just knowing there are places out there [like Panther Gorge],” he said.

The gorge is not the only rock-climbing area in the Park to see development in recent years. The latest version of Adirondack Rock, a two-volume guidebook, describes 3,200 routes, almost twice as many as the first edition, which came out in 2008.

Jim Lawyer, a co-author of Adirondack Rock, recognizes the achievements taking place in Panther Gorge but wonders if it will ever attract many climbers.

“I don’t know of anyone who’s repeated a route in there,” he said. “It’s just really hard to get to, and there’s other stuff that’s close that’s more convenient. People can get that adventure-style climbing without having to do that much work.”

Back in Panther Gorge, we had been on our feet for more than ten hours. But the team still wanted one more pitch before the long walk out. Crofoot and MacKenzie chose a hundred-foot crack with a forty-foot flared chimney, the crux. In climbing parlance, a chimney is a crack big enough to fit your whole body in. A flared chimney is one where the walls aren’t parallel, making the climbing more difficult.

Crofoot led again. He ascended the chimney without even breathing hard. Above the crux he discovered a dangerous-looking stack of rocks on a ledge. He yelled down to us: “This is just a big pile of death. I don’t know how this is sitting here.”

Kevin and I, standing below, moved out of range.

Eventually, it was our turn to climb. I found the chimney surprisingly difficult. With much panting, I eventually squirmed my way to easier terrain. I took a moment to knock a perilously perched stone the size of a desktop computer into the woods below—there was no one else around to worry about—and finished the route.

After rappelling, none of us was in a hurry to leave this sublime place. About 5 p.m., we finished packing for the trek out. We had at least four hours of hiking ahead of us. All told, our outing took seventeen hours. For MacKenzie and Crofoot, it was just another day in the gorge.

MacKenzie asked as we bushwhacked out of the gorge.

“Not immediately,” I replied, “but sometime.”

RATING CLIMBS
The Yosemite Decimal System is used to rank the difficulty of rock climbs. The system ranges from 5.0 (easiest) to 5.15 (extremely hard). Originally, the scale went only as high as 5.9, but as equipment and technique improved, climbers pushed the standards to 5.10 and beyond. Today, a 5.9 climb is regarded as moderate in difficulty. 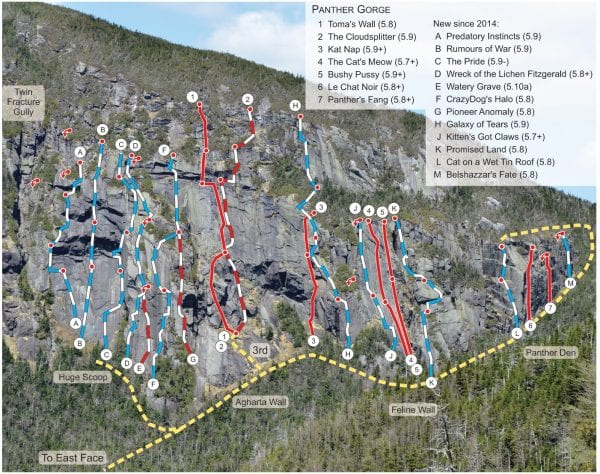 DIRECTIONS: From NY 73 in the hamlet of Keene Valley, turn west onto Adirondack Street. At 0.25 miles, continue straight on Johns Brook Lane and take it to its end at the Garden parking lot, 1.5 miles from NY 73. Take the Phelps Trail to Johns Brook Lodge and then to the junction with the Hopkins Trail. Veer left, crossing Johns Brook, and continue on the Phelps Trail to the junction with the State Range Trail. Bear right and go about 100 feet to a boggy area. Here begin bushwhacking south. In a few hundred feet, you should find a herd path for Marcy’s cliffs. The path is on the right slope of a narrow valley. There is no path to Haystack’s cliffs; bushwhack on the left slope.