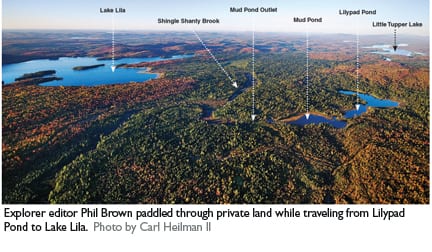 A year and a half after paddling through posted land connecting publicly owned waterways, Adirondack Explorer Editor Phil Brown has been sued for trespass by the private landowners, namely the Brandreth Park Association and the Friends of Thayer Lake.

The case could clarify the public’s right to paddle on waterways that pass through private land and resolve questions that the landowners say were left unanswered in a landmark Court of Appeals decision in 1998.

At issue is whether a waterway must have a commercial history to be considered “navigable-in-fact”—the legal term for inland rivers, streams, ponds, and lakes that are open to the public under the common-law right of navigation.

The two-mile trip through private land took a little more than an hour. Except for a brief portage around rapids on Mud Pond Outlet, Brown stayed in his canoe the whole time. He believes common law allows the public to paddle the waterways in question and to carry around the rapids. The state Department of Environmental Conservation has taken the same position.

But the Friends of Thayer Lake, which owns the land, and the affiliated Brandreth Park Association, which owns certain recreational rights on the tract, contend that Brown committed civil trespass. In November, they filed a lawsuit against Brown in state Supreme Court in Hamilton County seeking, among other things, a ruling that the waterways are not open to the public.

The lawsuit says “at least ten additional trespassers” paddled the waterways after Brown’s account of his trip appeared in the Adirondack Explorer in July 2009.

Brown says he wrote about the trip to draw attention to the long-running dispute over the public’s right to paddle through private land in the Adirondacks and elsewhere in the state. The Explorer has also published stories about canoe trips through posted land on the Beaver River and the East Branch of the St. Regis River.

“Phil was acting professionally and in good faith in covering this story, which has great importance to New Yorkers,” Woodman said. “The Explorer stands with him one hundred percent.”

The Explorer has hired Glens Falls attorney John Caffry, who worked with the Adirondack Mountain Club (ADK) in defense of five paddlers who went down the South Branch of the Moose River in 1991. Those paddlers were sued by the Adirondack League Club. The case led to a landmark ruling in which the Court of Appeals, the state’s highest court, said recreational use can be considered in determining whether a waterway is navigable-in-fact.

Dennis Phillips, the attorney for both the Brandreth Park Association and the Friends of Thayer Lake, contends that the court’s decision also upheld a commercial-use requirement and so remains open to interpretation. ‘‘There is something in there for everybody,’’ he said.

“In our view,” Phillips added, “this route [paddled by Brown] does not meet the legal test for navigable-in-fact because it has no history of commercial use.”

Caffry says he has no doubt that the waterways are open under the common law. He paddled the route himself in the fall of 2009. ‘‘What the Brandreths’ legal argument would do if it prevails is take us backward, undo what’s already been decided in the Moose River case,’’ he said.

ADK Executive Director Neil Woodworth, who is a lawyer himself, said the Court of Appeals recognized in the Moose River case that nowadays most rivers and streams are primarily used for recreational travel. Moreover, he said prior court decisions held that waterways navigable only by small boats and canoes are subject to the common-law right of navigation.

“In my view, the proper test for determining whether Shingle Shanty Brook is navigable-in-fact and thus open for public use is the waterway’s practical usefulness for recreational travel as part of a canoe route connecting public lands,” he said in an e-mail.

Similarly, DEC Assistant Commissioner Christopher Amato asserts that the legal test is whether a waterway has the capacity for trade or travel and, furthermore, that recreational use can demonstrate this capacity. Amato has asked the state attorney general to intervene in the lawsuit to defend the department’s position.

Phillips argues that only a court—not the department—can determine whether a waterway is navigable-in-fact.

Ross Whaley, senior adviser to the Adirondack Landowners Association, said he had no comment on the lawsuit. In an opinion piece that ran in the September issue of the Explorer, he argued that all the particulars of a waterway must be evaluated before a court can determine if a waterway is navigable-in-fact.

The trespass suit is the latest skirmish in a century-and-a-half-old battle between large landowners in the Adirondacks and the paddling (or rowing) public. In the 1970s, the legendary Adirondack canoeist Paul Jamieson pointed out that many water routes once enjoyed by the public were posted. As a result of his efforts, DEC researched the common law and drafted legislation in 1989 that would have codified the common law in statute. The department also drafted a preliminary list of 253 waterways throughout New York State that were thought to be navigable-in-fact (including Shingle Shanty Brook).

The legislation was blocked by Republicans in the state Senate—who were seen as protecting the interests of the landowners—and then dropped by its sponsors after the Moose River case was filed in 1991. The legislation has been revived in recent years, but with the Senate once again in Republican hands, enactment of a navigation-rights bill seems doubtful.

In the absence of legislation, the trespass complaint offers a chance to clarify the law—for both paddlers and landowners. Given the vagaries of a lawsuit, however, such an outcome is not guaranteed. The Moose River case, for instance, never determined whether the river was navigable-in-fact.

Because questions of fact remained, the Court of Appeals returned the matter to the lower court for trial. Then the parties settled in 2000 without going to trial. The settlement allows the public to paddle the river much of the year, if the water rises to an agreed-upon height at a gauge. However, the Adirondack League Club did not concede that the river is navigable-in-fact.

Woodworth warns that something similar could happen in the latest case. It’s possible, he said, that the Brandreths will seek a compromise that doesn’t affect their other holdings or those of other large landowners.

Before the lawsuit, the Brandreths rejected a compromise offered by DEC’s Amato. He had suggested a trial period of two or three years during which paddlers would be allowed to travel the waterways. DEC would provide patrols. After the experiment, DEC and the landowners would evaluate how it went and what to do next. Amato assumes that few paddlers would have used the waterways, because of their remoteness.

DEC had been prompted by the Sierra Club to open talks with the Brandreths. After Brown’s article ran in the Explorer, the Sierra Club asked DEC to force the landowners to take down a cable on Shingle Shanty and remove no-trespassing signs meant to deter paddlers.

The Explorer filed a freedom-of-information request to obtain copies of letters between DEC and the Brandreths. In his last letter to DEC, dated September 3, Phillips asked the department and the State Police to prosecute “trespassers.” In his reply, however, Amato asserted that the public has a right to paddle the waterways.

“The Department considers the Association’s actions to impede or prevent such navigation to be unlawful,” Amato wrote. He also warned that the DEC might refer the matter to the attorney general for legal action if the cables and signs are not removed.

Even after this letter, Amato held out hope that the Brandreths would reconsider their stance before the start of the next paddling season. Instead, the landowners filed suit against Brown.

Although the Moose River case dragged on for almost a decade, both sides expect this lawsuit will not last nearly as long. Phillips said most of the facts are not in dispute. He predicts the suit will take at most three years, and that’s assuming it goes all the way to the Court of Appeals.