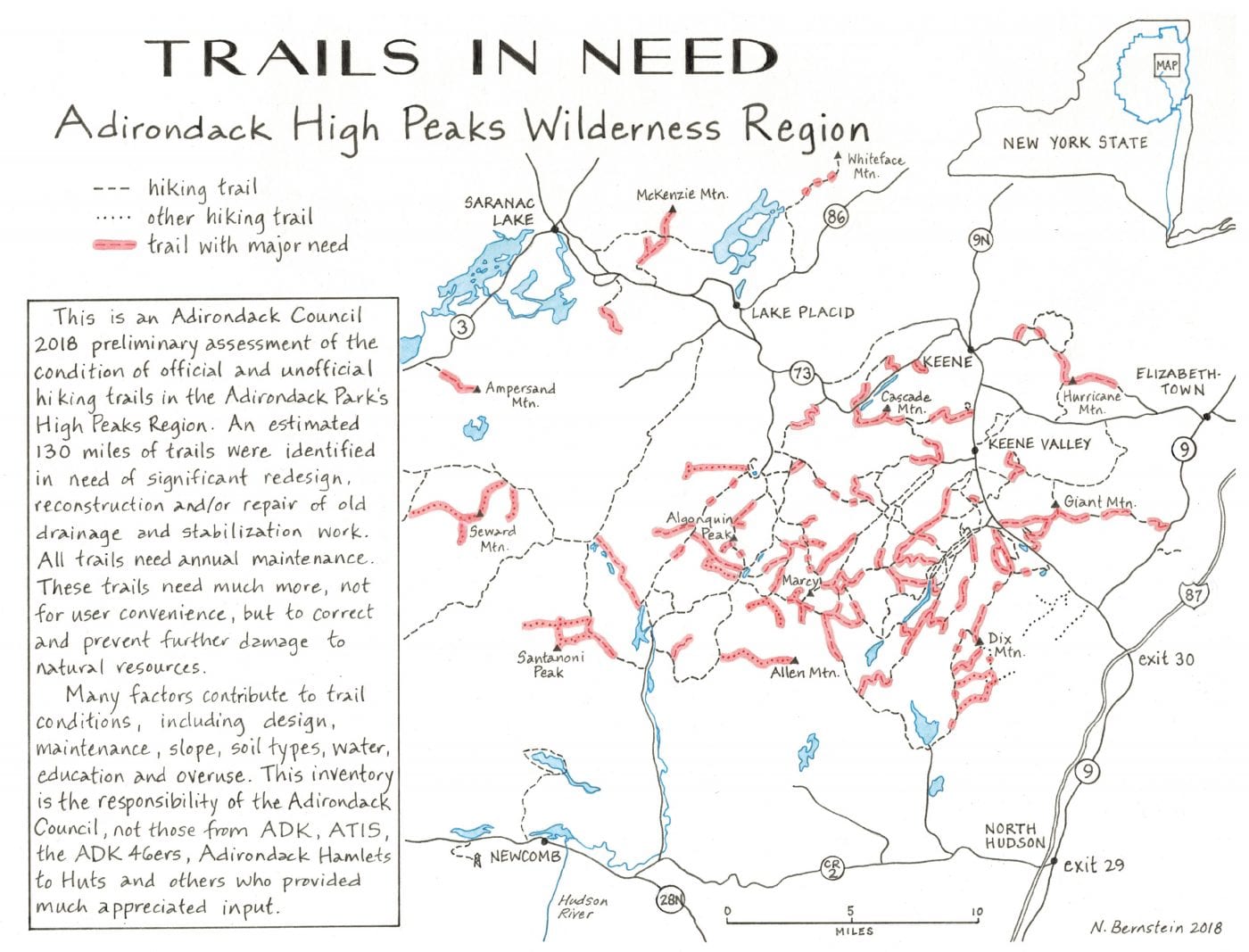 Many hiking trails throughout the High Peaks Wilderness region are in rough shape and need to be restored, according to a leading Adirondack environmental group.

A preliminary assessment by the Adirondack Council found that 130 miles of trails are heavily damaged due to overuse, poor design or lack of maintenance.

The assessment found damaged trails on Giant Mountain, Marcy, and in the Dix and Seward mountain ranges, among other places. Trails to McKenzie, Ampersand and Baker were also found to be in need of maintenance. The latter three are all part of the Saranac 6ers, a hiking challenge that includes six mountains.

The Adirondack Council received input from trail professionals, licensed guides and others for this assessment. They interviewed individuals from the Adirondack Mountain Club, Adirondack 46ers, Adirondack Hamlets to Huts, Adirondack Trail Improvement Society, and Split Rock Stonework and Trails.

One of the biggest problems with many of the High Peaks trails is that they were originally herd paths created through use more than a century ago.

“It’s important to keep in mind that a lot of these trails were never professionally laid out to begin with,” Council spokesman John Sheehan said.

For instance, the last mile of the trail to Ampersand Mountain is essentially straight up the mountain. As a result, it has become severely eroded. This is a common problem throughout the High Peaks region, where many tails have come to resemble stream beds because they are covered with rocks.

The state Department of Environmental Conservation is in charge of managing the trails. It contracts with trails crews from the Adirondack Mountain Club, Adirondack 46ers, and Student Conservation Association for projects. It also has one year-round trail crew and a seasonal trail crew in the High Peaks. That’s down from four trail crews in the late 1990s.

The Adirondack Council is advocating that the DEC staffing levels be increased to deal with the need for trail maintenance, a problem that is exacerbated by the spike in users in recent years.

“What they accomplish is amazing, since their staffing levels have been reduced by close to 25 percent from 10 years ago,” said Adirondack Council Executive Director Willie Janeway in a press release. “Over that same span, we have seen the Forest Preserve, state Environmental Protection Fund capital monies, community economic development funding and the DEC’s responsibilities grow, along with the explosion in the number of annual visitors.