Home » Stories » When heaven freezes over

Ice skating on a wild pond in a magical setting can warm the soul.

SKATING OFF the beaten track brings a sense of freedom to my soul. No matter how cold it is outside, I will haul my family to frozen ponds to lash skates to their feet. I know the Adirondack chill will be driven out with a few swift glides on the ice.

I often go far afield from Saranac Lake in search of places to skate, such as along the shores of Lake Champlain and Lake George, and I always ask people to share their favorite skating spots. More often, though, I am drawn to a stretch of Route 73 between Lake Placid and Keene Valley known for its consistent ice.

Our usual spots are the Cascade Lakes, nestled between high cliffs on Cascade and Pitchoff mountains, and Chapel Pond, beneath cliffs on Round Mountain. Chapel Pond and both Cascade Lakes lie along the highway. The rocky faces often funnel the wind to sweep the ice of snow. As much as I enjoy skating on these three water bodies, the hidden Giant’s Washbowl holds a special fascination.

Last winter, we shared our secret with Jesse LaPlante, a classmate of my twelve-year-old son Sawyer. Wearing crampons and Microspikes, we scrambled over rocks and along icy switchbacks as we ascended to the Washbowl, gaining 570 feet over 0.7 miles.

During the climb, Sawyer and my nine-year-old daughter Lisse wondered if the ice would really be there, as if it were a treasure waiting to be discovered. With each crampon step I could feel my own excitement growing. We took a small detour to the overlook for a breathtaking view of the cliffs of Round Mountain with the Lower Great Range looming beyond in the west. Far below, we spotted a skater on Chapel Pond.

When we reached the Washbowl,we bushwhacked to the north shore, which lies beneath the cliffs of the Giant’s Nubble. The ice gleamed in the sun. After testing its strength, we walked single file across the ice, passing a beaver lodge that probably wouldn’t be visible in summer. Using a weathered log for a bench, I laced my skates and took the first turn on the ice, skimming along the surface. I felt like an explorer—or like a skier getting the first run in fresh powder.

The air blew cold around my face as I spun in circles. For a moment I heard only the creaking of the trees. I was entranced by the whirling of blue sky mixed with clouds. The ice was perfect—thick, smooth, swept clean by the wind. The children followed me onto the ice, and soon their joyous laughter was echoing off the cliffs.

Part of the adventure of wilderness skating is the unpredictability. Will the ice be strong? Will it be rough or smooth? Will it be blanketed by snow? These are questions you needn’t worry about if you stick to polished rinks. Yet, when conditions are good, skating in the wild, in a postcard setting, is simply magical. It sure beats skating in a circle with masses of people listening to elevator music.

Of course, skating on ponds comes with some risks. The state Department of Environmental Conservation recommends staying off ice unless it’s at least three or four inches thick (you can check with an augur). Also, you should not venture onto ice alone. Store a change of clothes, along with hand and foot warmers, in a plastic bag in your backpack. It’s also a good idea to leave extra clothes in your car. Skate with ice claws, so if you do fall through, you can pull yourself to safety. The party also should have a throw rope for such emergencies.

My son sometimes accuses me of sucking the fun out of adventure with my equipment checklist and safety precautions. I don’t focus on the negative, but I feel that being able to strap on skates and take off with the wind whistling through the trees is a gift—a gift that I don’t ever take for granted. ■ 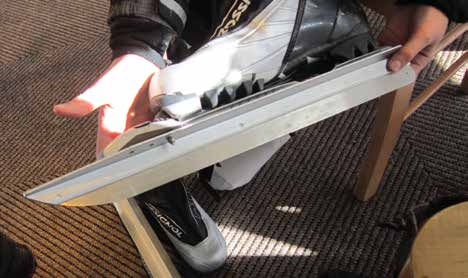 If you get into wilderness skating in a serious way, you may want to check out Nordic ice skates. They are equipped with bindings so you don’t have to switch out of your ski or snow boots. Originating in Scandinavia, Nordic skates are designed to plow through a few inches of fresh powder and maintain stability on rough ice. They come with different blade lengths for various conditions. You can choose bindings that fit Telemark ski boots or traditional cross-country boots. Another option of wilderness skates is Multiskates, which ratchet around winter hiking boots. Either type can make the equipment switch from ski, crampon, or snowshoe a snap. Nordic skates are available at NordicSkater.com.