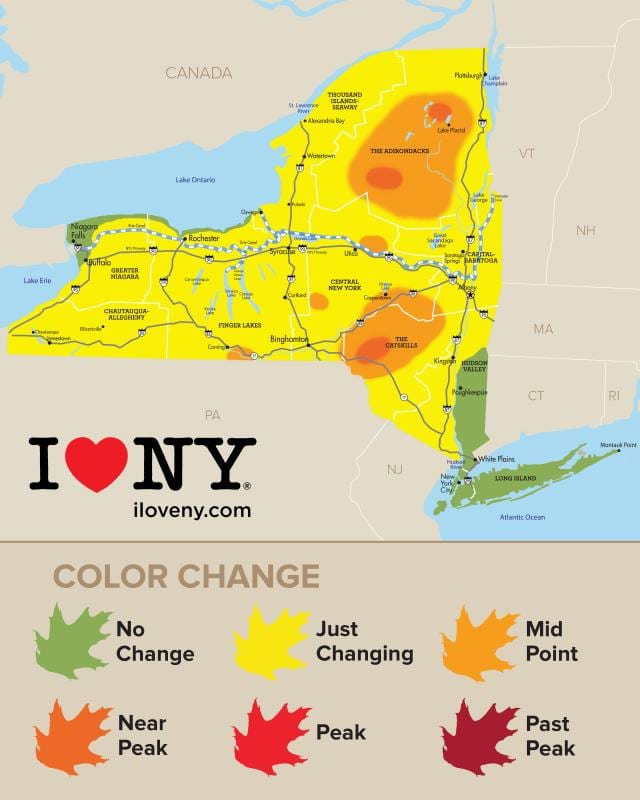 Higher elevations in the High Peaks region are expected to be near peak fall foliage colors this weekend (Sept. 23 & 24), although recent warm weather appears to have made them appear less dramatic than earlier this month.

I Love NY, which issues a weekly fall foliage report, anticipates that 85 percent of the leaves in the upper elevations of High Peaks will have seen color change by the end of this weekend. Colors will range from bright orange, yellow, and gold, to maroon and reds.

“I’m guessing peak will be end of next week at Heart Lake, but if the weather stays so warm and dry the foliage change might not happen that fast,” said Seth Jones, Education Manager at the Adirondack Mountain Club. “With the cold weather we had early in September, the leaves were changing really fast but that seems to have halted with the warm weather.”

Heart Lake is located in the eastern High Peaks, just outside of Lake Placid in the northern Adirondacks. The High Peaks Information Center and Adirondak Loj are located nearby on Adirondack Mountain Club property. So are trailheads to popular mountains, such as Mount Marcy and Algonquin Peak.

Jones said red maples have dropped a lot of their leaves due to the recent warm, dry weather, “but the sugar maples, birches, beeches and aspens are still turning color.

There will be around 60 percent color change around the village of Lake Placid by the weekend, according to I Love New York. At Whiteface Mountain in Wilmington, color change is expected to reach the midpoint this weekend with about 35 percent change.

Foliage in Herkimer County near Old Forge will also be near peak this weekend, at around 75 percent color change.

While many areas near the High Peaks are reaching peak this weekend, the best time to see foliage further south will be the first week in October.

Parking lots at many popular High Peaks trailheads in the Lake Placid and Keene areas generally fill up shortly after sunrise during weekends in September. Here are a few other hiking options for seeing the fall foliage: