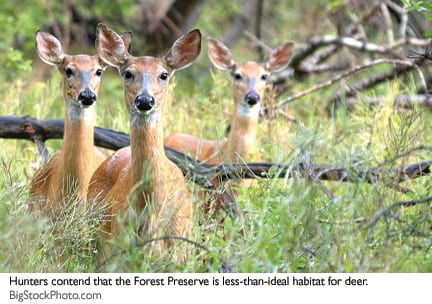 Contrary to hunters’ complaints, the whitetail population is on the rise, state biologist says.

Dan Ladd wrote the book on Adirondack deer hunting (or one of them, anyway), and he runs a website called ADKHunter that receives comments from hundreds of hunters. The consensus among Ladd, his hunting pals, and his correspondents is that the population of white-tailed deer is in decline in the Adirondack Park.

Ladd lays much of the blame on coyotes.

“They are the enemy,” said Ladd, the author of Deer Hunting in the Adirondacks. “We are simply seeing more of them while seeing fewer deer.”

Bob Brown, a vice president of the Franklin County Federation of Fish and Game Clubs, points to a second culprit: the forever-wild Forest Preserve. Because logging is not allowed on the Preserve, he argues, the maturing public forests contain little new growth for deer to browse. And the Forest Preserve now comprises about 46 percent of the Park.

“As more land is put into wilderness situations, we’re finding that less wildlife can use that land,” Brown said. “Forever wild should include wildlife.”

Brown is not alone in the view that the expansion of the Forest Preserve hurts the deer population. This has been the conventional wisdom among hunters and biologists for decades.

“The future is definitely going to work against deer,” said Bob Chambers, professor emeritus at the state College of Environmental Science and Forestry. “There is less logging, and the Forest Preserve will continue to grow. Over time there will be a general habitat-quality decline.”

But to some observers, the numbers suggest a different story. 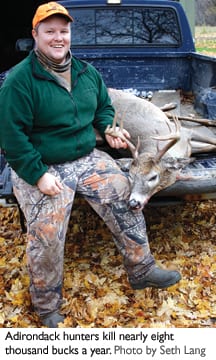 Today’s deer population is the second largest ever recorded in the Adirondacks and may be headed toward a record, according to the state Department of Environmental Conservation. Forty years ago, in 1970, the Park had as few as thirty thousand deer. Today the population is estimated to be between sixty thousand and eighty thousand. This increase occurred over a period when the coyote population also increased and when much of the Forest Preserve began the transition to old-growth conditions.

“The pre-colonial forest was not an unbroken stand of huge trees,” he said. “It was a very diverse mixture of young and old trees, with openings created by fire, wind, and dying old trees.”

These openings would have produced browse for deer. He sees the same natural forces at work in the maturing Forest Preserve. “The forest of today is starting to become old enough that many trees are dying of old age and falling over, which creates small openings in the canopy where sunlight can reach the ground and stimulate new growth,” he said.

Reed also said the evergreen stands that were logged before their acquisition by the state have matured enough to provide shelter for deer in winter.

As a result of improved habitat, Reed expects the population to continue to climb. “I don’t expect a sudden explosion in the deer population,” he said, “more like a slow increase, with ups and downs due to winter conditions—perhaps 20 to 30 percent higher over the next twenty years.”

Chambers remains unconvinced. He contends that the increase in the deer herd since the 1970s reflects an inevitable rebound following a series of severe winters that killed many of the deer. The greatest growth, he said, took place on the periphery of the Park where there are many farms and private timberlands. The deer population also grew in the interior of the Park, he said, but not nearly as much. 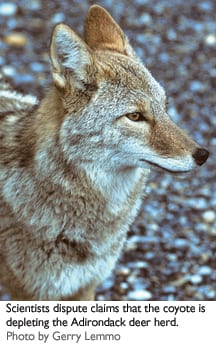 What’s more, Chambers said the rate of population growth has slowed in the last twenty years. He maintains that any benefits from an aging forest are marginal. “I grew up in Pennsylvania where there are true old-growth forests,” he said. “When a small opening occurs, the deer glom it off very quickly.” He added, however, that Pennsylvania’s old forests teem with deer.

Reed contends that the transition of the 2.7 million acres of Forest Preserve to old growth will continue to improve deer habitat for decades. Yet, he said the Adirondacks will never attain the deer-population densities found in other parts of the state. Roughly 85 percent of the state’s one million deer dwell in the state’s Southern Zone—the hunting region outside the Adirondacks, Tug Hill, and adjacent counties.

“It’s never going to be the Southern Zone,” Reed said. “The Adirondacks have value as a wilderness hunting experience.”

With long winters, deep snows, and rough terrain, the Adirondacks have always been marginal habitat for white-tailed deer. There is little information about the deer herd in the early days of European settlement. However, the herd increased markedly in the late 1800s as selective logging of mature pine and spruce opened up the forest. It crashed around the turn of the century after clear cuts and forest fires destroyed huge swaths of forestland and overhunting took its toll. Eventually, the habitat recovered and the state enacted game laws to protect deer, setting the stage for an unprecedented boom.

The state has kept statistics on the number of deer killed each year since 1900. These data —used to gauge the size of the herd—would generate a line graph that resembles a silhouette of the Great Range: numerous peaks and valleys but showing an overall rising trend.

The deer population reached its zenith in the fifties and sixties. In 1954, hunters took 10,192 bucks, which remains the annual record. But three hard winters in a row, starting in 1969, reduced the deer population by half as the animals couldn’t get at the forage beneath the deep snow. Reed also notes that the decline occurred when much of the Forest Preserve consisted of even-aged stands with little undergrowth, habitat inhospitable to deer. The sudden scarcity of whitetails was felt by sportsmen: in 1968, hunters killed 8,383 bucks in the Adirondacks, but in 1971, they managed to kill only 2,907.

Since those lean times, the pendulum has swung the other way. Over the past dozen years, Adirondack hunters have killed on average 7,931 bucks a year. By way of comparison, in the twelve years from 1954 to 1965, hunters killed an average of 8,003 bucks—slightly more than today, but there were more hunters back then. In 2000, hunters had their second-best year ever, taking 9,632 bucks.

Scientists are still trying to figure out the coyote’s impact on the deer population. Coyotes moved into the Adirondacks starting in the 1920s. On their way east through Canada, they interbred with wolves. As a result, Adirondack coyotes are bigger than their brethren in the western states and more capable of bringing down deer.

Chambers, the retired ESF professor, said his studies of coyote scat in the 1970s revealed that deer are the main food of Adirondack coyotes. However, he could not tell from the scat whether the deer had been killed by the coyotes or scavenged. More recently, other researchers from the College of Environmental Science and Forestry tried to ascertain how often coyotes kill deer. They strapped GPS collars on thirty coyotes in the Southern Zone and retraced their movements every three days over the course of two winters. The scientists came across seventy deer carcasses but could verify the cause of death in only forty cases. Of those forty deer, only three had been killed by coyotes. A study in the summer came up with more deer kills: about thirty fawns.

Wildlife ecologist Jacqueline Frair, the lead researcher for the GPS studies, said the findings suggest that coyotes are not affecting the deer population. Rather, she said the population is regulated by the availability of food and the severity of winters. If the population does drop after a hard winter, the coyotes’ predation of fawns may slow the herd’s recovery, according to Frair.

Chambers questions the applicability of the studies to the Adirondacks. The coyotes in Steuben and Otsego counties, where the studies were conducted, migrated east through the Midwest, not Canada, and so did not interbreed with wolves. Thus, he said, they are smaller than Adirondack coyotes and do not specialize in deer. Moreover, he said coyotes place additional strain on Adirondack deer that already must struggle through hard winters.

Frair is awaiting the results of a GPS study in the central Adirondacks that may reveal more about the northern coyotes’ predatory behavior. She won’t be surprised if it turns out that Adirondack coyotes do kill more deer, in part because the deep snows make it harder for deer to escape predators in winter. “I expect we will find more kills simply because of snow depth,” she said, “but I think the take-home message will be about the same—that they’re not killing enough adults to have a big top-down effect.”

Reed agrees. He said coyotes would need to kill about 30 percent of the does each year to trigger a decline in the overall deer population. Otherwise, the herd grows fast enough to replace the deer killed. Although Reed doesn’t know how many does coyotes kill each year, he said it’s far below the 30 percent threshold.

In fact, the coyote has not prevented the number of deer killed by hunters from steadily increasing. So if the deer are doing OK, why do Adirondack hunters believe the population is in decline (even as the harvest numbers suggest otherwise)?

Reed, an avid deer hunter, suggests that hunters may be seeing fewer deer because the sport has become more sedentary. In the past, he said, hunters stalked game and conducted deer drives, methods that afforded more opportunities for encountering deer. Nowadays, he said, “hunters want to sit in a tree stand and listen to their iPod.

They want to get there on their four-wheeler. You can sit for a long time in the woods and not see anything.”

Ladd, however, begs to differ. “Hunters I know get pretty far back in to get away from the crowds,” he said. “Most have hunted their territory for generations, and therefore there is much stock in what they observe—including fewer deer.”

Billy Allan, an old-school hunter from Saranac Lake, offers this view of the sportsmen’s gripes: “They’re lousy woodsmen; that’s exactly why. You can sit in a stand for three weeks and not see a deer. The people that don’t see deer, they either don’t hunt very much or don’t move around very much. There’s six deer per square mile. Are you going to sit in one place or you going to go find one? If I don’t see one for twenty minutes, I’m gone.”