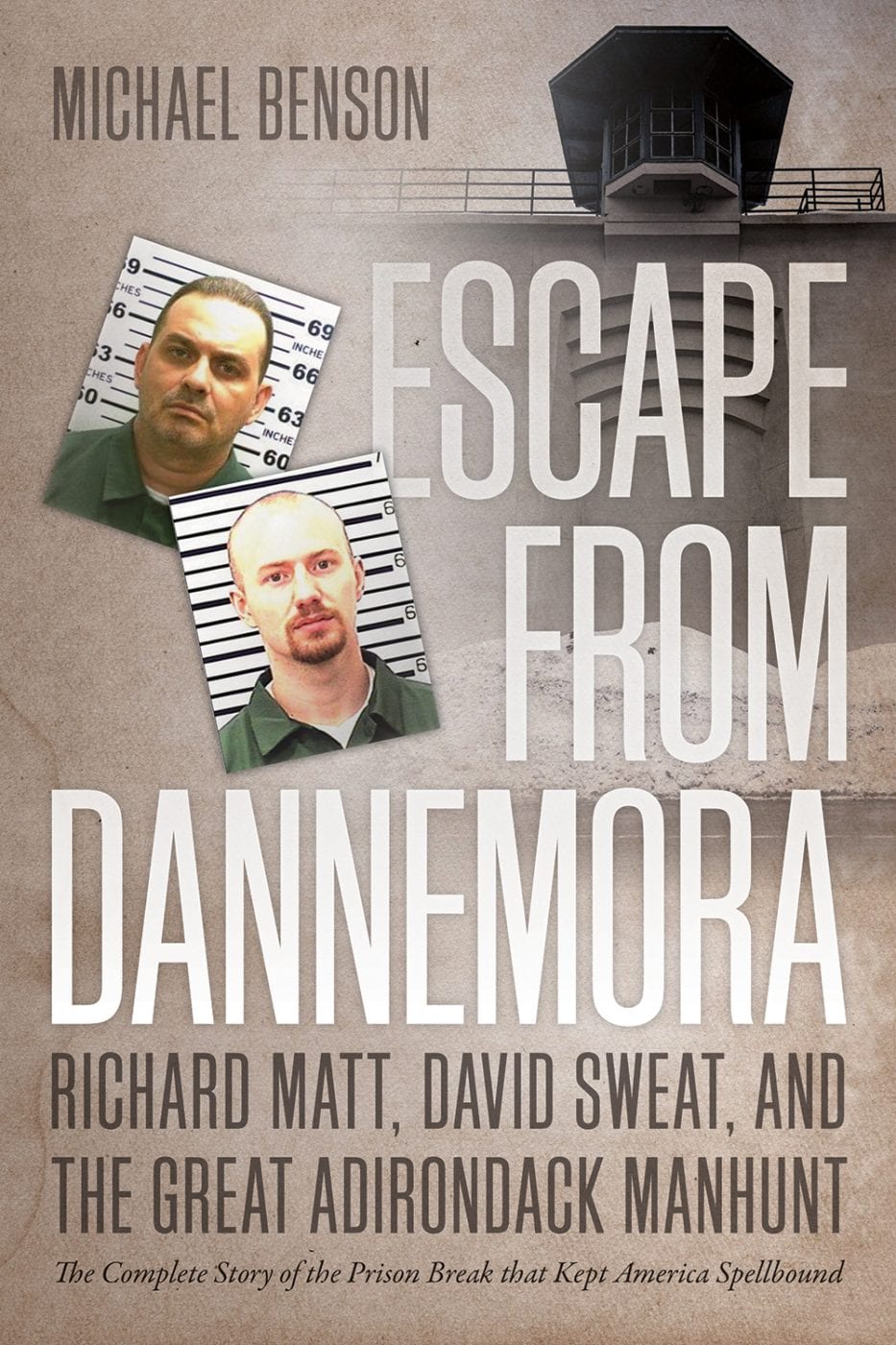 In the summer of 2015, while driving my beat-up Toyota truck through the back roads of northern Clinton and Franklin counties documenting the Great Dannemora Prison Break, I kept thinking that I had been swallowed whole by a tabloid news story, or maybe a trashy pulp novel, that refused to end. The setting was the rainy, gloomy Gothic woods of the northern Adirondack foothills. The characters all seemed to come straight from central casting.

There were the two brutal killers, David Sweat and Richard Matt, who had pulled off an escape that instantly drew comparisons with the film The Shawshank Redemption, digging and cutting their way out of one of the toughest prisons in the world. There was a brash, swaggering Governor Andrew Cuomo, who barnstormed through an active crime scene with a film crew in tow. There was the sad-sack, defeated-looking prison warden Steve Racette, the poor bastard on whose watch the impossible had occurred.

And don’t forget Joyce Mitchell, the mousy prison employee whose sex-romp romance with inmate David Sweat led her to help the two killers by providing them with tools and other contraband. By her own admission, Mitchell even considered collaborating with the men in murdering her husband before chickening out and leaving the escapees without a getaway car. Which left them to wander the North Woods for the next three miserable weeks, while America was fixated.

You can, of course, make this kind of stuff up. Hack writers have been doing it as long as there’ve been audiences hungry for crime and blood. But why would you when real life presented such brilliantly gritty raw material? So it’s no surprise that a small cottage industry has grown up around the Dannemora manhunt, with actor Ben Stiller reportedly working on a film based on Matt and Sweat’s escapades and a Lifetime original movie airing in April that focused on Mitchell’s high jinks.

A trailer for the Lifetime movie played the escape for its sexy absurdism. When an investigator asks why she helped a pair of convicts who had killed a sheriff’s deputy and chopped one victim into meaty chunks, the actress portraying Mitchell shrugs and whispers, “Everybody says I’m too nice.” The real Mitchell is serving time in a state prison for women in Bedford Hills. She was denied parole in February and likely won’t be released until 2022.

There are already at least three books about the escape, including a sober and detailed account from North Country historian Lawrence Gooley (Escape from Dannemora, self-published on his Bloated Toe Enterprises press) and a volume from the Plattsburgh Press-Republican (Prison Break: The Story that Captured a Nation) that collects the newspaper’s reporting and photography during the manhunt and its aftermath.

But I think the book that best captures the Fargo-esque blood-and-sleaze qualities of the saga is Escape from Dannemora (ForeEdge Press, an imprint of University of New England Press) by a Brooklyn writer named Michael Benson. It’s clearly a hastily written affair, snatching bits of fact and anecdote and sensation from across the blogosphere. But Benson treats the whole enterprise with relish, writing about inmates who “sizzled” in Dannemora’s electric chair and observing tartly that “investigators were impressed with the extent of Joyce Mitchell’s promiscuity.”

Describing the first encounter between Richard Matt and David Sweat, Benson writes that it was “like a chemical reaction, a bubbling up from the depths-of-hell alchemy.” In another passage, he captures the weird madcap scariness of Mitchell, who admitted telling the two killers that they should “pop” her husband because he’s “worth more to me dead than alive,” but later claimed that she was just being a “smart aleck.” That stuff’s creepy, and it’s a guilty sort of fun, but it also gets at the trashy truth of the whole business.

I have quibbles. In his haste, and his embrace of melodrama, the writer gets stuff wrong, and he cuts some sizable corners. He uses what he describes as “composite characters” in his account. At one point he suggests that there are more bears in the North Country than people (there aren’t), and he claims that the escape played out against a rugged landscape where there are “one hundred mountains taller than five thousand feet high.” In fact, there are only two, and they aren’t near Dannemora.

But Benson’s version of Escape from Dannemora, if you don’t take it too seriously, works in the best spirit of books of this kind. It captures how normal life can turn upside-down on a mellow spring day, transforming quiet rural towns into a maze of checkpoints with neighborhoods in lockdown and armed patrols on street corners. You get a feel for how average, decent people—I’m thinking especially of Steve Racette, the prison superintendent—can turn out to be in the wrong place at the wrong time and find their lives shattered.

You also get a taste for the slow corruption that can entrap men and women who have worked for decades in the Adirondack Park’s prisons.

The Dannemora prison break ended, suitably enough, with violence—though, thank God, it was inflicted only on the escaped inmates themselves. Richard Matt was gunned down, killed instantly by a former Army ranger and Border Patrol agent named Christopher Voss. David Sweat was shot and captured in a field in the town of Constable, not far from the Canadian border, by a State Police sergeant named Jay Cook. So this story had heroes as well as villains.

Even as the smoke cleared, and as investigators began trying to understand how Clinton Correctional Facility’s security had been thoroughly breached, the escape tale was sliding into the vibrant mulch of America’s crime-pop-culture.

Benson says Matt and Sweat entered the pantheon of criminals who linger in our imaginations. He points out that the manhunt was so widely followed across the country that it was even included as a question on Jeopardy, the TV game show.

The Dannemora escape provided troubling insights into how one of New York’s toughest prisons has been run for decades. There have been credible allegations of corrections officers beating and threatening to torture inmates and accounts of a near-total breakdown in discipline.

In her own book-length assessment of the prison break, published after an official inquiry, New York State Inspector General Katherine Leahy-Scott wrote that “the extent of complacency and failure to adhere to the most basic security standards … was egregious and inexcusable.”