Farmers reach into urban markets with help from Essex ‘Hub’

Every Wednesday morning around 6:30, a refrigerated van from the Adirondacks stops at the corner of 135th Street and Riverside Drive in Harlem, where its contents—a week’s supply of fresh food from Essex Farm for 40-50 households in Manhattan and Brooklyn—are transferred into two more vans, one headed for each borough.

The Adirondack vehicle, having traveled down the Northway and Thruway through the night, returns to The Hub on the Hill in Essex, a nonprofit local foods promoter that recently added delivery to the list of services it offers local farmers to help them get products to market.

Essex County’s farming revival of the last decade or so, which primarily fed regional markets at first, is increasingly supported by sales in urban markets elsewhere in the state—often in New York City. It takes some extra food miles to keep a local food movement thriving in the Adirondacks, where the growing season is short and the population seasonal. Two of the three farms featured in Ben Stechschulte’s 2012 film, “Small Farm Rising,” now sell a significant amount of their produce in the city.

The challenge of delivering Essex Farm shares to the city—which the farm coordinated itself for the first few years it offered them there—showed there was a need. The Hub stepped in to fill it, purchasing the refrigerated van and putting all of the drivers on its payroll and insurance.

After the early-morning handoff in Harlem, the city vans deliver the food to each member’s door or doorman—sometimes the drivers even put it in the fridge. “Members get food that’s freshly picked and packed, with minimal packaging, from a farm in New York State,” says Jori Wekin, The Hub on the Hill’s founder, who previously worked at Essex Farm and helped develop its urban membership. Despite the wealth of food options in the city, she notes, “They’re not going to find that anywhere else.”

Local members of Essex Farm pick up their food on the farm on Friday afternoons, year-round. The weekly distribution is a chaotic affair in a dusty farmyard, full of recipe exchanges and other news—a way station between the fields and the kitchen, or the root cellar and the kitchen in winter. What packaging there is gets recycled each week. Egg boxes and Ball jars that held dairy products are returned at one end of an open-air pavilion, while dry goods wait in bins to be scooped into bags at the other.

In warm weather, plastic barrels of produce, fresh from the fields, surround the tables where members fill their own bags or crates. Freezers full of meat—chicken, beef, pork and lamb—line one side of the pavilion. Refrigerated trailers filled with dairy products, eggs, vegetables and herbs surround it. Sometimes there are preserved products made from farm ingredients in the commercial kitchen at The Hub, less than a mile away: sauerkraut, kimchi, hot sauce, lard. Members take all the food they need for a week, with only occasional limits on items that are scarce, such as butter and cream, eggs or beef, depending on the season. “Be generous and people will be generous,” Mark Kimball, the impresario behind this venture, likes to say.

Since its inception in 2003, the year-round, full-diet CSA (Community Supported Agriculture) farm with subscribers has been a leader among the new generation of small Essex County farms, spawning several more that sell a narrower range of products directly to the public and inspiring others to locate nearby. Full and By Farm, Mace Chasm Farm, North Country Creamery and Reber Rock Farm were all founded by Essex Farm alumni. The competition forced Essex Farm to find new markets, which it has done by selling shares in New York City, and to a lesser extent in Albany and Adirondack communities far from Essex, to which The Hub also delivers. At this point half the farm’s income comes from New York City. Members there pay a premium—$145 per adult per week, plus $60 for kids over 5, instead of the $85 and $35 that local members pay—because the city shares are packed and delivered. This homespun version of FreshDirect still lives up to the farm’s axiom: “one farm, all your food.”

On the Tuesday before Thanksgiving, Kathleen Wiley led a team of four women, two of them Amish, packing some 40 shares for delivery to New York City the following day. They filled insulated plastic boxes with the food each member had requested through an online order form, and included frozen water bottles to keep the contents cool. The share that week included more meat than it had in previous weeks, since some of the farm’s Dorset sheep had just been butchered. A few members had requested bins of McIntosh apples to make applesauce. There was also the usual range of dairy products, hardy vegetables and grains.

A copy of Kristin Kimball’s eloquent weekly farm note accompanies each share, telling the story of the farm she runs with her husband Mark in real time, so distant members are encouraged to think about where their food comes from. Some New York City members have visited, staying in an Essex Airbnb the farm has use of; most learned of it by word of mouth.

Last year The Hub, which began operating in 2015, also developed two weekly delivery routes in the Adirondacks, driving produce from other Essex County farms to co-ops, markets and schools throughout the park, and a third route to Saratoga and Albany. Juniper Hill Farm and North Country Creamery are both regular users of this service. Previously, these farms were making or coordinating their own deliveries. “We were driving our orders around the Adirondacks and Capital Region from 2013 to 2017,” recalls Ashlee Kleinhammer, who runs North Country Creamery in Keeseville with her partner Steven Googin. “We tried to coordinate with other farms delivering to the same locations weekly, but this proved too challenging for us farmers to administer. We were feeling pulled in too many directions, and had been urging The Hub to offer a delivery service.”

“We don’t need five trucks and five drivers going to the same store,” Wekin says. Her goals in developing the delivery routes were to “share and utilize resources and expand markets.” In December, The Hub launched a new web platform, “Local Food Marketplace,” so restaurants, retailers and other businesses requesting deliveries on its weekly routes can select food from all the farms it serves in one place. Previously, they ordered directly from each farm. Soon the web platform may be available to private buyers as well, offering the chance to curate a farm share from multiple farms instead of subscribing to a single one.

Some small farms in the Adirondacks are developing their own urban delivery systems. Fledging Crow Farm, one of the few vegetable growers in the region to be certified “organic” and known for its salad greens, was invited to participate in several farmers markets in New York City in 2018, including the celebrated Union Square Greenmarket, all run by the nonprofit GrowNYC.

“I spent more nights in a hotel than I did in my own home last winter,” says Ian Ater, who is now the sole owner of the farm—his former partner Lucas Christenson having moved on.

Fledging Crow applied to GrowNYC for eight years before being admitted to its network of markets. Some are seasonal, but many are year-round, so it extends the season during which the farm can sell directly to the public. Most Adirondack farmers markets only operate in summer. Last year Fledging Crow attended three to five markets each week in Manhattan and Brooklyn, depending on the season. The stall fees in the city are much stiffer than those Ater faces in the Adirondacks—$600 each week to attend three New York City markets last summer, compared to $320 for the season in Keene Valley, which he still considers “the most beautiful farmers market in New York State,” with the High Peaks rising over Marcy Field.

The loss of his business partner and a serious injury last summer left Ater with some economic challenges, and made the cost of driving back and forth to the city, or sending staff members there, worthwhile, even necessary, to keep the farm going. The same vegetables sometimes fetch higher prices in the city, and the farm can reach more customers and sell more produce there.

“One of the food justice issues facing the Adirondacks is whether we will retain access to the good food being produced here,” says Michele Drozd, executive director of the Elizabethtown artists’ community Craigardan and a cofounder of the North Country Food Justice Working Group. Food grown at small farms without pesticides, whether or not it’s certified “organic,” typically costs more than conventionally grown produce and can be hard for locals to afford.

Advocates of local food argue there are hidden costs on that balance sheet, including federal subsidies for industrial farming and health-care needs exacerbated by processed food. Regional self-sufficiency is a goal for some. “Don’t let California feed New York” is the motto of Juniper Hill Farm in Wadhams, a major producer of organic vegetables in the region that supplies natural food stores and restaurants throughout the Adirondacks, using The Hub’s delivery service. It also sells to larger food hubs near Albany and Rochester.

Mace Chasm Farm in Keeseville has made occasional use of The Hub on the Hill’s delivery service to send its grass-fed meat products to buyers in New York City. Courtney Grimes-Sutton, who runs the business with her husband Asa Thomas-Train, notes The Hub’s fees can be steep for producers of high-value items: 10% of the invoice, plus $10 for each drop-off. Wekin says The Hub is still tinkering with its delivery pricing structure. (The percentage is 7% within the park, and 5% for deliveries to schools.)

Mace Chasm has applied to join a farmers market in Troy, and toyed with the thought of doing a market in New York City to extend its season, but the trip is a disincentive. “In the winter in the Adirondacks the consumer/customer connection vanishes or greatly diminishes, when outdoor farmers markets close for the colder months of the year,” Grimes-Sutton explains. “We’re also considering scaling back a bit—trying to find a sweet spot where our summer sales can support our annual expenses, and where we do not offer as many jobs. This is tougher for a livestock producer than a veggie farmer, as we have breeding herds to feed year-round. We’d rather find steady sales year-round.” 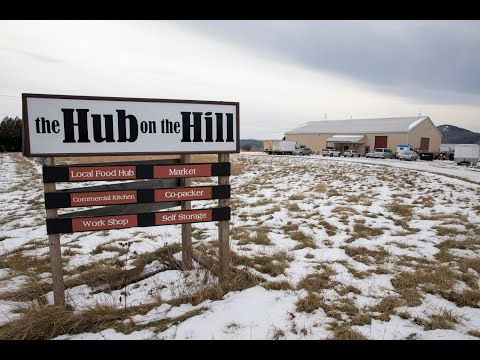