Home » Stories » An artist by nature 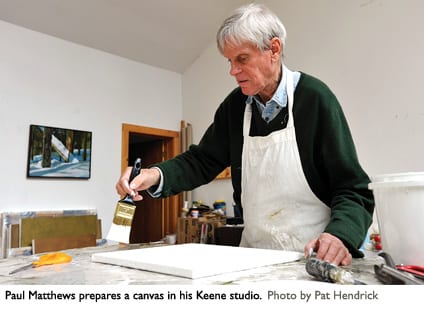 It’s late afternoon, and the big sky over the High Peaks is thick and gray. The dark clouds could crack open any moment and spill their cold rain.

But artist Paul Matthews doesn’t mind. In his studio high above the hamlet of Keene, he’s been painting since early morning. Even on a dim day, the north light streams through an expanse of high, sloping windows and onto the unfinished landscape of mountains and clouds on his easel.

Surrounded by woods, Matthews’ studio is about a quarter-mile up a narrow, bumpy dirt road from his house. When he works an eight-hour shift, he often takes a cat nap on a simple wooden bed in the studio.

“Every day is a good day for painting,” says the 75-year-old Matthews. A kind gentleman with an appetite for literature, he is humble about his artwork, and brief observations about it are often followed with a quote from Faulkner or a few lines from a sonnet by Keats. 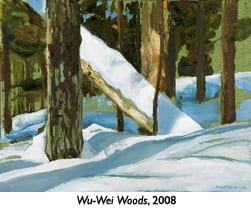 As a landscape artist, Matthews is a weather watcher. On another day, he might be outdoors, chasing and photographing a galloping nimbus or cumulus cloud. When it comes to clouds, he’s learned that it’s best to work from photographs. “By the time you mix the paint, the clouds are gone,” he says.

On the floor near the easel, propped up against the wall, an 18-by-24-inch image of rock and water awaits the return of his brush and a sunny day. “I’ve painted that rock thirty-five times. It’s in the Ausable River, right below a pool where we swim in the summer. … I’ll take the painting and work right there. It’s really hard to paint moving water.”

“Butterfly Rock” is his nickname for the geological form “not because it looks like a butterfly,” he says, “but because often, just as I’m finishing working … a butterfly has circled around me, as if to bless me.”

For more than forty years, Matthews has breathed Adirondack air in the summer and then returned to his other home and studio in New Jersey.

He is one of the best-known contemporary artists in the Adirondacks, with a string of exhibits at the Atea Ring Gallery in Westport and appearances at the Lake Placid Center for the Arts and State University of New York at Plattsburgh.

Matthews’s painting Cascade Sunset (The Dark Hills) is in the collection of the Adirondack Museum. Curator Laura Rice describes it as “a gorgeous image of sunset over the mountain … the focus is on the light caught by clouds in the sky.”

“No one captures the Adirondacks in this contemporary day as he has and does,” says gallery owner Atea Ring. “Matthews paints the essence of what the Adirondacks landscape is. … People often say, “I was out riding the other day and saw ‘the old Paul Matthews clouds. … There is an ominous quality to the Adirondacks. He sees it, feels it, and has the ability to paint it.”

Matthews is widely exhibited in the New York-New Jersey area. In 2003, he had a solo exhibit at the New Jersey State Museum, and this spring, he joined photographer Nathan Farb and painters Thomas Paquette and Don Wynn in “Adirondack Art Today,” an exhibit at D. Wigmore Fine Art in Manhattan.

In many of the East Coast shows, one would not identify Matthews as an Adirondack landscape artist. When he returns to urban life, he’s a people watcher, searching and gathering faces and emotions. Over his nearly half-century career, he’s painted countless portraits and figure paintings, including nudes.

“The human form, nude, in all its variations, is at its most mysterious, fascinating, and beautiful,” he explains on his Web site.

Male and female nudes sometimes show up in his Adirondack paintings, and he has hired professional models to pose outdoors in nearby meadows, woods, and streams.

“I’m torn in a lot of directions,” says Matthews. “I’m still trying to figure it out after all these years.”

His most recent show, which just closed at the Atea Ring Gallery, was about landscapes, and there were more than two dozen paintings, selected from among forty works he created in 2008-2009.

But he also unveiled an uncommissioned portrait of novelist Russell Banks, who lives in Keene and Saratoga Springs. “I got him to pose from life, and I took photographs,” Matthews says. The writer and the artist are longtime friends, and Banks and his wife, the poet Chase Twitchell, own several of Matthews’s works, including an oil painting of abolitionist John Brown, the subject of his historical novel Cloudsplitter. 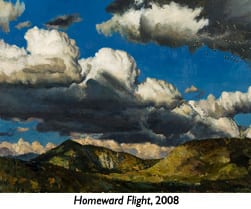 Matthews’s oil-on-linen portrait of another celebrated writer happened quite by accident. One day, when he was in Manhattan, snapping photos of interesting people, a woman walking down the street with a shopping bag caught his eye. After he took her photo, he found out it was Eudora Welty, the Pulitzer-Prize winning Southern author (who died in 2001). “I love everything about her, her looks, her poetry,” he says.

Matthews has been drawing faces since he was a boy in New York City, and his mother bought him a box of pastels. “I couldn’t wait to come home from school and make big faces with the pastels. I would start it moving and let it take form.”

He attended Kenyon College in Ohio, but it wasn’t until he served two years in the Army that he started thinking seriously about his life’s work. “I knew I was going to be a writer or a painter,” he says.

When he left the military in 1957, he enrolled at the Cooper Union School of Art in New York City. He earned the school’s highest achievement prize, and a few years later, in 1966, he had a solo show at the Zabriskie Gallery in Manhattan.

His Adirondack life began when he married his wife, Lelia, and tapped into her North Country roots. Their Keene home was built in 1923 by her grandfather as a summer retreat from New York City’s hustle and bustle. The two-story stone house has windows that once adorned a gothic church and a heart-stopping panoramic view of the High Peaks, with Porter in the center, Cascade and Pitchoff on the right, and Mount Marcy, New York’s highest mountain, on the left. Outside the house, stone totems or cairns, like ancient monuments, rise here and there at the edge of the woods.

Matthews climbed Marcy once (“My kids made me,” he says), but he’s always preferred hiking the lesser peaks like Mount Jo, Baxter, and Owls Head because “you see more from the low ones.”

Paul and Lelia raised four children—Tom, Harry, Josh and Hyla (named after the Robert Frost poem “Hyla Brook”). When the brood was young, the family spent a month in Keene, where Matthews painted outdoors and in a garage near the house. After the children grew up, he built the studio in the woods, and the couple started spending more time in the Adirondacks, arriving in late May and departing in late October.

Unlike his New Jersey studio, in downtown Lambertville, Matthews’s creative space in the Adirondacks is quiet and distant from humanity.

When asked about his most recent landscapes, he picks up two paintings.

Instead of a sweeping vista of timeless mountain and sky, the scene is intimate: a close-up encounter with a few selected trees, a study of the textures and differences of their rough bark or the angle of a fallen trunk.

In some of these tree images, his brush is loose and expressionistic. “I’m moving the paint around,” he says.

But for Matthews, who has mixed and remixed traditional styles over the years, it’s just his way of responding to the world at another point in time. As proof, he unearths a soft, almost ethereal acrylic-and-watercolor of Porter and Cascade from the 1960s, when he was in art school and abstract expressionism was at its height.

Faces have always been easier to paint than mountains, rocks, and rivers, Matthews says. “With nature, there’s always the feeling that you are failing.”

And he is reminded of this whenever he takes a break after a long stretch of concentrating on a canvas.

“When I’ve been working hard, I look up from my work and go outside.” Gazing on the woods, the clouds, and the sky, he remarks that “everything looks so beautiful. It’s like there’s been an opening and you can see through it … and we take it all for granted.”