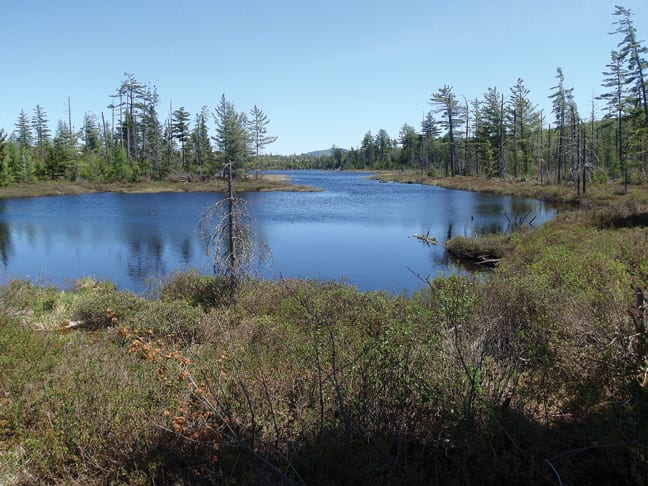 Eric Schneiderman moves to intervene on behalf of the state in lawsuit against Explorer editor.

Schneiderman’s office has asked to intervene, on behalf of the state, in the civil-trespass case filed in November by the Friends of Thayer Lake and the Brandreth Park Association against Adirondack Explorer Editor Phil Brown.

The plaintiffs argue that the two-mile stretch that includes Mud Pond, Mud Pond Outlet, and Shingle Shanty Brook should be closed to the public. But the state has taken Brown’s side.The waters should be open, Schneiderman said, contending that the property owners’ use of signs, chains and cameras to deter paddlers are a public nuisance.

“The public has a right to travel and enjoy this beautiful waterway without being stopped or harassed,” Schneiderman said in a statement. “I will not hesitate to defend the public’s right to travel on these or other navigable waters. My office will work closely with the Department of Environmental Conservation (DEC) to ensure that the public can once again enjoy this waterway—which connects two state-owned wilderness areas in the Adirondack Park.”

Dennis Phillips, the attorney for the plaintiffs, says he will oppose the state’s involvement. The state didn’t trespass on the land, he says—Brown did.

Brown’s two-mile paddle down contested waters let him skip a 0.8-mile carry over state-owned land. Phillips said the state built the portage trail so paddlers wouldn’t cross the private land. “Our position is, they did a good job,” he said of the trail, which runs between Lilypad Pond and the publicly owned stretch of Shingle Shanty Brook.

The case hinges on whether the court determines that the waters Brown paddled are “navigable-in-fact.” If they are, the public can use them to travel—even though they are privately owned. That common-law principle dates to medieval England.

The two sides differ over whether a waterway must have a history of commercial use to be deemed navigable-in-fact.

John Caffry, Brown’s lawyer, does not concede that the waterways in question lack such a history, but he contends that recreational use alone is enough to make a stretch of water navigable-in-fact, adding that the state’s involvement bolsters that argument. “I also think it means the plaintiffs are going to have a much harder time in court proving that it’s not,” he said.

Phillips contends that the waterways have never been used for trade. “In the absence of any commercial use of the water in that area, there is no public right of navigation,” he said.

Brown’s journey into the legal waters began after he paddled from Little Tupper Lake to Lake Lila in May 2009. He wrote a story about the trip as part of an ongoing series of articles in the Explorer about paddlers’ rights; in this case, the landowners sought to keep the public away by not only stretching a chain across the river and posting it with no-trespassing signs, but also by asking the New York State Department of Environmental Conservation to ticket paddlers for trespass.

The DEC never agreed to do that—and told the landowners the public should have access, and the chains and signs should be removed immediately.

The chains didn’t come down, and Brown was sued for trespass.

While Brown’s legal fight began last fall, others have been pushing the issue far longer. Charles Morrison, a former DEC executive who is now project director for the Adirondack Committee of the Sierra Club Atlantic Chapter, worked on legislation in the 1990s intended to clarify paddlers’ rights. Those who block the public from navigable waters, he said, “are usurping a property right that the public owns.”

Explorer Publisher Tom Woodman said he was heartened by the attorney general’s motion to intervene.

“We felt all along the action, if there was going to be one, should involve the state and not Phil Brown,” Woodman said. “We think their participation is appropriate and we welcome it, and it just strengthens the argument that there are larger public issues at stake here.”

To read previous stories on this case, click here.