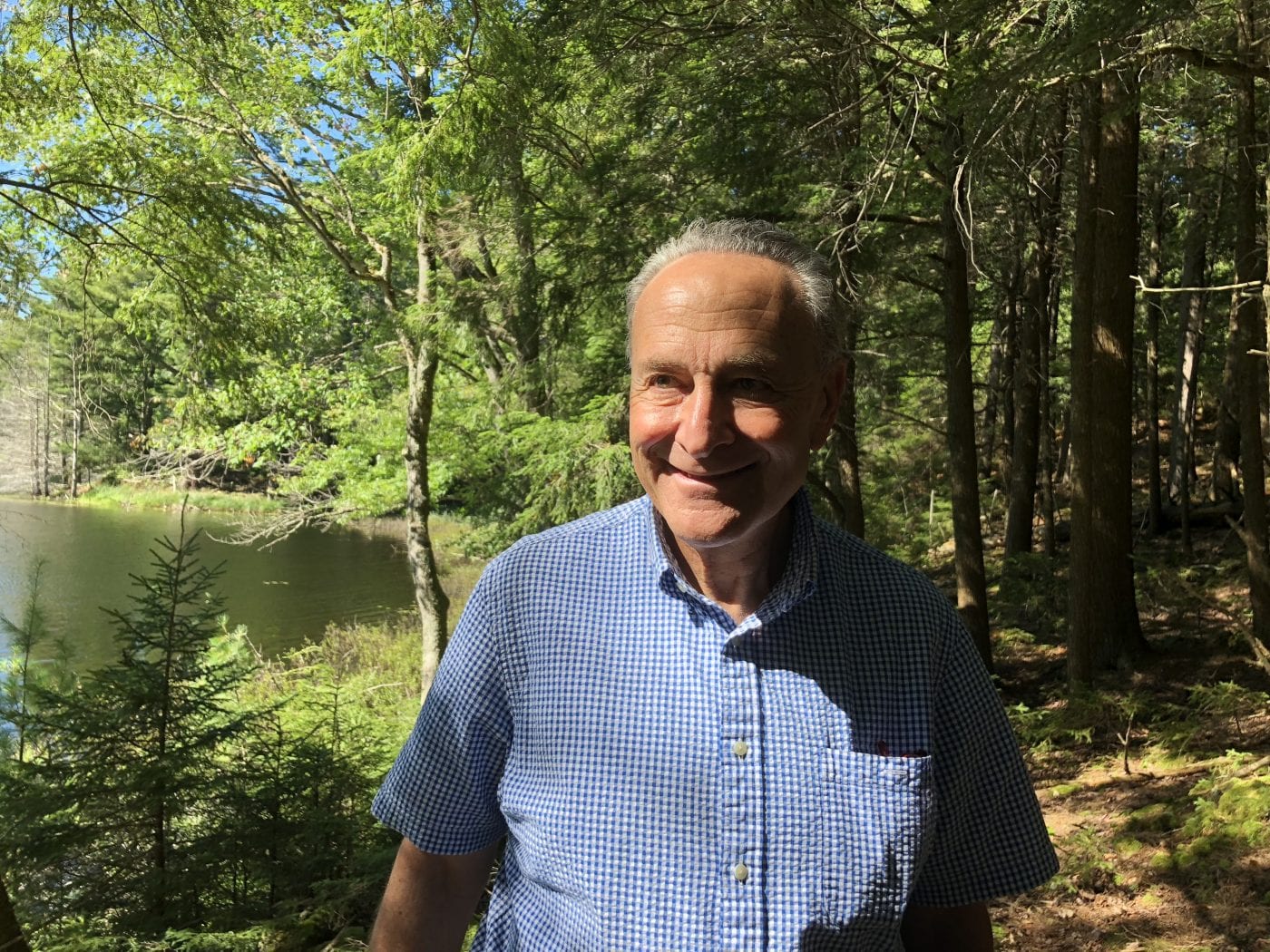 Sen. Chuck Schumer visits Bear Pond on Friday. Deregulation of power plants threatens a return of the acid rain that once plagued Adirondack waters, he said. Photo by Olivia Reynolds.

Thirty years ago Bear Pond was too acidic to support trout, blighted by acid rain pollution that drifted in from Midwestern power plants.

On Friday afternoon, when U.S. Sen. Chuck Schumer, D-NY, used the pond on the edge of the St. Regis Canoe Area as a backdrop for an environmental policy speech, a loon dove for fish and surfaced behind him. It was evidence of a recovery made possible by federal law but now threatened by a push to deregulate industry, the senator said.

State tests show that the Adirondacks pond near Paul Smiths is now 10 times less acidic than in the 1980s, and trout are back.

The mandated emissions treatments are aimed at smog-forming pollutants but also cut into acid depositions.

Now the Trump administration’s Environmental Protection Agency has failed to enforce those rules for the second summer in a row, Schumer said, and the healing trend could end. He called on the government to enforce the rules and said that if he leads the Senate after the midterm elections he’ll block a vote to confirm a new EPA administrator who stands in the way.

Cleaning the air and water is pro-economy in the Adirondacks, he said, with much of the economy depending on outdoor recreation.

“Donald Trump did not campaign on increasing pollution,” he added.

The Adirondack Council has pressed EPA to make the power plants use their pollution controls, and joined the Environmental Defense Fund and the state of Maryland in suing to force it.

Council spokesman John Sheehan said the conservation group also worries that EPA budget cuts—proposed by the agency itself—will curtail or end monitoring grants that give environmentalists the data they need to make a case.

An EPA spokeswoman on Friday said the agency will continue to support acid rain and other pollutant monitoring in the coming fiscal year, and that a program to incentivize power plant operators to control pollution last year reduced summer emissions of nitrogen oxide—one of the pollutants affecting downwind states.

One seasonal resident who worries about the prospect for new acid pollution told Schumer she can’t understand why power plants wouldn’t continue using pollution controls they already had to install, even if it saves them money.

“It’s just beyond ridiculous,” said Gina Reid, whose family has had a camp on nearby Upper St. Regis Lake for more than a century.

She recalled summers in decades past when there was much less life on and in the water.

“When I was a little girl we did see a lot of loons,” the 56-year-old said. “Yesterday morning we saw 12 outside our camp.”

Ed Hixson, a year-round resident since 1980, remembers loving Bear Pond’s aqua-blue hue and missing it after the lake turned a cloudy green in recent years. Then a Paul Smith’s College scientist told him the acid rain had made the water blue, and recovery had darkened it.