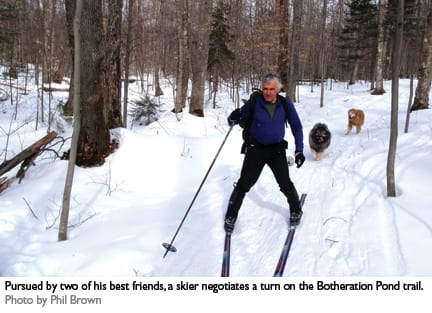 The trail reaching into the Siamese Ponds Wilderness from near Thirteenth Lake can be a bustling, merry place on a good weekend in ski season. Residents of the homes around the lake and visitors to nearby Garnet Hill Lodge augment the supply of day-trippers, so there can be a healthy stream of people gliding into the woods from the Old Farm Clearing Trailhead.

The main trail connects to a variety of side trips of varying difficulty as it makes its way 10.8 miles through the wilderness to a trailhead on Route 8 near Bakers Mills. The first four miles are wide and gentle and ideal for a family outing. One Easter my wife and I found a kind of treasure hunt under way in the region, with skiers following clues to various checkpoints along the trails.

As much fun as a communal outing can be, it’s also rewarding to pole away from fellow skiers and experience the solitude of the wilderness in winter. Even in this busy area, that’s possible on a weekday. Today, as I try a recently opened loop past Botheration Pond, I won’t see another person. And the trailhead register records only eight other skiers in the past week—just two of them heading to Botheration Pond. 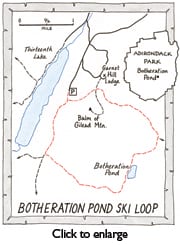 Explorers should know that the name Botheration does not describe the quality of the ski experience. (What it does describe is a mystery. Trail guides offer no explanation and the local writers and editors I asked were also in the dark.)

The trail is quite easily navigated. The hills are mostly gradual, and the trail is even and wide by wilderness standards.

The Siamese Ponds Trail Improvement Society made this loop possible by building two bridges over the East Branch of the Sacandaga River in 2009. Working with Department of Environmental Conservation staff, the volunteers created substantial yet attractive structures allowing skiers to cross what would otherwise be serious obstacles. The group also clears and maintains other trails in the area.

Traveling counterclockwise on the loop, I encounter only two tricky downhills, both found just before reaching William Blake Pond on the homeward reach from Botheration. I will crash on one when a turny little pitch ejects me into a shallow gully at its base. Looping clockwise on the trail would turn these pitches into easily climbed ascents without creating any real problems elsewhere on the trail.

The Botheration Pond loop measures 5.7 miles from the trail register, according to the DEC sign. The register is 0.6 miles from the parking area, making the complete trip just less than 7 miles. Going counterclockwise the loop follows the main trail into the Siamese Ponds Wilderness as far as the Old Farm Clearing, where it turns left at the trail junction.

The clearing, once home for a nineteenth-century lumberman, is now pretty much overgrown.

I cover the 0.7 miles to the clearing in fifteen minutes of easy skiing over a packed track with an inch of dry light snow powdering the surface. The temperature in the teens is ideal for skiing in a sweater and light shell. 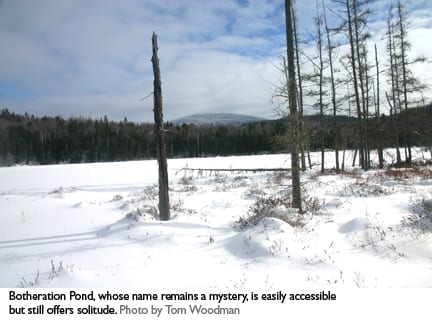 Following red ski markers from the clearing, the trail climbs steadily but gradually for two miles through mixed forest to Botheration Pond. The two bridges installed by the trail-improvement folks cross the East Branch of the Sacandaga River just before the trail reaches the pond. Snow and ice cover the river, but I can hear it tumbling beneath the surface. The bridges have an elegant rustic design with twig-style rails, and they harmonize with the wilderness setting rather than clash with it.

The trail approaches the pond gradually, separated from the shore by a band of trees before arriving at a clearing where I can ski out onto the ice. Directly across the small pond, Gore Mountain rises with its rounded bulk shining with fresh snow. Communication towers at its summit are reminders of an outside world.

After a leisurely lunch and some picture-taking, I push off for the descent that circles back to the junction at the trail register. The trail leading from the pond is a little bumpier and more winding than the climb has been, but it’s still easy going, suitable in these conditions for anyone but a brand-new beginner.

One mile from the pond I reach a junction where a trail branches to the right to Barton Mines Road in 1.4 miles via the Halfway Brook Trail. I continue to the left. The gradual descent makes for an enjoyable stretch of trail with only a couple of tricky (but not scary) turns. Reaching a meadow that may be a frozen marsh, the trail drops in the first of the two steeper pitches that require some snowplowing and sidestepping around obstacles, ending in the little gully by diminutive William Blake Pond that topples me onto my back. It’s a soft landing.

A half mile from William Blake and 1.8 miles from Botheration, another trail junction is marked by a sign pointing the way to a ski shop, evidence that I’m on the outskirts of the Garnet Hill Lodge cross-country-ski area. To the left a trail ascends Balm of Gilead Mountain, the hill that this trail circles. (The mountain draws its name from a variety of balsam poplar called the Balm of Gilead tree, according to Barbara McMartin in Discover the South Central Adirondacks.)

I arrive at the trail register in mid-afternoon, having spent about four hours in an easy-going navigation of a lovely wilderness loop.