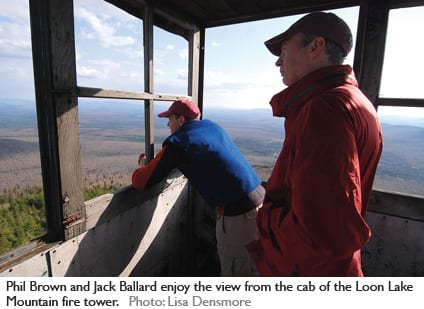 I’m hiking with two professional photographers, and I’ve come to the conclusion that photographers are not like other people. They see things we don’t.

Like the way the late-afternoon light strikes the bud of a striped maple. Or the beauty in the wet leaves at the bottom of a mud puddle. Or the geometric angles in a pile of timber slash.

It means we stop a lot for picture-taking, but that’s OK. I want to savor our hike up Loon Lake Mountain. Although the summit lies in the Forest Preserve, it’s hemmed in on three sides by private land. On my visit to this fire-tower peak several years ago, a friend and I had to bushwhack across state land for hours to avoid trespassing. Today, my companions and I are taking a much more direct and easier route, following logging roads and an overgrown trail.

We may be the first members of the general public to do so—at least, legally. The logging roads are on Lyme Timber land that, until two weeks ago, was closed to the public. The land was declared open to all on April 30, consummating an agreement reached in 2004 during the administration of Gov. George Pataki.

In that mammoth deal, International Paper sold 260,000 acres in the Adirondack Park to Lyme, which in turn agreed to sell the state conservation easements that prohibit development but permit logging. The company also agreed to give the public full recreation rights on eighty-four thousand acres scattered among several parcels in different parts of the Park, but not until five years had passed.

Loon Lake Mountain is sure to become a premier destination, especially after the state Department of Environmental Conservation (DEC) fixes up the trail and the fire tower. Work on the trail may be done this year, according to Thomas Martin, DEC’s regional forester. The rehabilitation of the tower, however, is expected to take two or three years.

But it’s possible to do this hike now. Despite some blowdown near the top, the trail is fairly easy to follow. And although the tower is too dangerous to climb in its current condition, the summit’s wide-open ledges offer spectacular views of the northern Adirondacks. Not a bad payoff for the three-mile hike up.

I followed the “new” route on a weekday in mid-May with Lisa Densmore, a Saranac Lake native, and her friend Jack Ballard, who lives in Montana. Both are outdoor writers and photographers. Lisa, who now lives in New Hampshire, recently finished a book for Falcon Guides called Hiking the Adirondacks, which is scheduled to be published next spring. She did all the writing and the photography for the guidebook, which describes forty-two hikes.

Unfortunately, the change in Loon Lake Mountain’s status happened too late for Lisa’s book, but she was excited to climb a mountain she first visited as a teenager. I meet her and Jack at the start of county Route 26, which passes through the summer community of Loon Lake. We drive north to a gated logging road. No-trespassing signs still festoon trees near the gate, but DEC says those will come down soon.

We hit the trail about 3:30 p.m. Though it’s a little late in the day, Lisa and Jack convince me that this is a good thing. You know, better light for photography. To an ordinary hiker, the walk up the gravel road might seem uninteresting. But Lisa soon falls behind, taking pictures of trout lilies, violets, striped maples, and whatever else strikes her fancy. When Jack and I reach a fork with a skid road, we wait for her to catch up.

The fork is about a mile from the gate. DEC intends to build a parking lot here, which would cut the hike to just two miles. At the fork, we turn left onto the grassy skid road. Soon we pass two clearings with views of Loon Lake Mountain. At the second, we leave the road for a clear view of the tower.

A few miles from the gate, we come to the first of several wooden bridges. Although serviceable, the bridges need repairing. 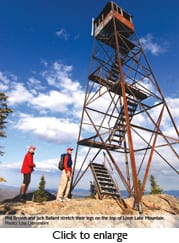 After the bridge, the route narrows and starts to climb. It now resembles a footpath. Occasionally, we pass one of the old wooden poles that once held the tower’s phone line.

Since it’s early spring, we see a lot of wildflowers in the woods: purple trillium, spring beauty, trout lily, among others. As we get higher, the trail steepens. When we pause for a breather, we flush a dark bird from the brush. Although we catch only a glimpse, Jack identifies it as a dark-eyed junco. “When they take off and you see those two stripes of white on the tail, that’s pretty definitive,” he says.

A little later we find three piles of moose scat. The components of moose droppings are larger than deer’s, about the size of grapes. I take out my point-and-shoot for a close-up. This is about as creative as I get with a camera.

As we climb, the steep trail becomes a narrow gully filled with boulders and occasionally blocked by blowdown. This is the most challenging part of the hike. The initial plans call for only clearing the trail. It would be nice if DEC eventually built switchbacks to ease the grade and reduce erosion.

We’re glad when we reach the summit ridge, though our work isn’t done yet. Turning left, we follow the trail as best we can through a thick forest of spruce and fir. In a few spots, downed trees throw us off track, but we soon manage to find the path again. When cleared and marked, this section of trail will be a pleasant finale to the ascent.

In a few minutes, we emerge from the woods at the base of the fire tower. Open bedrock offers views in almost every direction. We can see the broad back of Lyon Mountain to the northeast, the sharp point of Whiteface Mountain to the southeast, a number of the High Peaks farther south. Nearby to the north are Debar and Baldface mountains, with Debar Pond glistening between them. Much farther north we see a ribbon of water and decide it must be the St. Lawrence River.

former IP lands, but also lands to the east once owned by Domtar Industries.

As reported in the March/April Explorer, the state recently opened twenty-eight thousand acres of the former Domtar lands to public recreation. Between the IP and Domtar deals, about sixty-four thousand acres of private timberlands in the northeastern Adirondacks have been opened for recreation in the past six months.

Many people may be tempted to climb the tower, but we advise against it. The lower steps have been detached and hang precariously from the first landing. The tower also is missing protective fencing and a few steps.

The Loon Lake Homeowners Association is trying to raise money to rehabilitate the tower. Keith Silliman, one of the group’s directors, told me that he hopes the work can be done in the next few years. “The tower is in great shape overall, so it should take a minimal amount of work,” he said.

But even without the tower, this is a great hike. So take your time. And take a lot of pictures.

History in the making for Adirondack Wilderness, Clean Water, and Climate Justice

Despite one of the shortest legislative sessions in New York’s state history, the Adirondack Park saw a great number of successes….Read more.