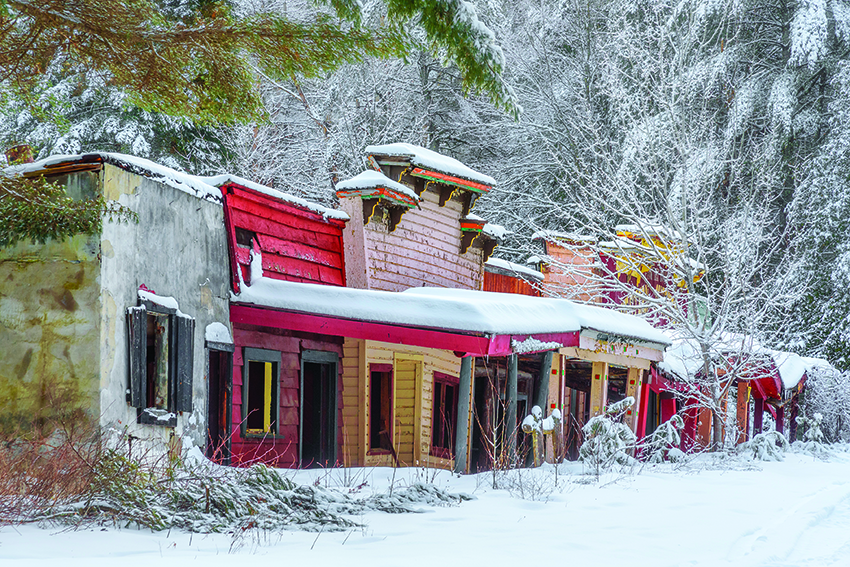 Even as debate over how the state should classify newly acquired lands continues, creative ideas from state and local officials point to exciting ways for local communities and the Park as a whole to benefit from the expansion of the Forest Preserve.

The state’s phased purchase of sixty-five thousand acres of former Finch, Pruyn and Company timberlands over the past five years has held out the promise of sustainable economic development from the start. As spectacular natural attractions like OK Slip Falls, the Essex Chain Lakes, and Boreas Ponds are open to the public for the first time, they should draw an influx of new visitors to the central Adirondack region, especially the “Five Towns”  area that is home to most of the new public land.

The challenge has been for small hamlets and rural areas to develop appropriate facilities to serve visitors so that tourist dollars remain with the local residents.

The Adirondack chapter of the Nature Conservancy, which made the state-land acquisitions possible, stepped up on this issue too and offered $500,000 in grants for business development benefiting the Five Towns. And now Governor Andrew Cuomo has announced an ambitious proposal to transform property at the major entryway to the Five Towns into a “gateway” worthy of the name. Developed in conjunction with the Five Towns and the Open Space Institute, plans call for the kind of facilities that make visitors feel like they are entering a special place. They would include a mix of public and commercial enterprises that should bring meaningful employment and economic benefits to an underserved area.

From the perspectives both of wise Park management and enlightened economic development the idea is a winner.

Cuomo proposes a $32 million project to create the gateway on lands at Exit 29 of the Northway, where visitors from both north and south would leave the highway to visit the Essex Chain, Boreas Ponds, and other Park attractions. Funds would come from a mix of public and private investment.

Travelers will recognize the eighty-five-acre property as the location of the now-crumbling remains of Frontier Town, a theme park that closed in 1998. Under the plan the state would also purchase a conservation easement on three hundred acres. This is a great spot for such a center. It restores a productive purpose to what’s become a derelict eyesore. It locates intensive use in an appropriate spot adjacent to a highway rather than next to more sensitive natural areas. And it’s centrally located to give visitors a sense of entering a Park whether they are traveling from Albany, New York City, and other parts south or from Canada to the north.

Under Cuomo’s proposal, the gateway would include a visitor-information center, a state campground and day-use area on the Schroon River, facilities for events and exhibits, and areas designated for commercial use, whether that be lodging, food, or other services.

The visitor center, if done right, could be an important management tool for the Park in addition to being a tourist draw. As articles in the Explorer have shown, heavy recreational use of the High Peaks endangers the environmental health of popular hiking destinations and degrades the character of what should be an experience of wild nature.

A visitor center can be a place for state or volunteer interpreters to educate visitors on how to use the Park safely and with low impact. As important, it can introduce travelers to beautiful Adirondack destinations other than the best known and most-overused trails and peaks. By guiding visitors to lesser-known treasures, the visitor center can relieve the destructive pressure on the High Peaks. And, of course, it will spread the economic benefits of tourism to different communities.

The gateway can also be a way to manage visitation to the new state lands. A center at Exit 29 could become a base for shuttling hikers, paddlers, and skiers to destinations like the Essex Chain or Boreas Ponds, and so reduce vehicle traffic into sensitive areas.

Ron Moore, supervisor of the Town of North Hudson, where Frontier Town is located, talked about his hopes for the area in an interview with the Explorer in the January/February issue. They include snowmobile access via trails directly from Frontier Town. Though many details of this idea need to be resolved, including the route of a proposed trail through the Boreas Tract, this idea of a staging area has promise. It would concentrate activity on property that could support services for the sledders. And it could be the basis for a winter economy in a region that could sorely use it.

Cuomo’s proposal is a bold commitment to wise development in the Adirondacks. It must navigate legislative review and approval as well as legal and financial processes. Its details may evolve over the years that it will take to complete. But as long it contains the combination of broad Park management goals and regional economic benefits it deserves enthusiastic support.