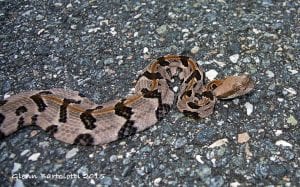 The state Department of Environmental Conservation says a contractor illegally killed a timber rattlesnake, a threatened species in New York State. The snake’s head and tail were cut off. In another incident, environmental conservation officers investigated the death of a moose in the town of Webb. Following is the latest ECO report:

Neil Stevens, a 10-year veteran with DEC’s Division of Law Enforcement, was recently named the North East Conservation Law Enforcement Chiefs Association (NECLECA) “Officer of the Year.” NECLECA is a professional organization of the chiefs and command staff from 13 northeastern states, U.S. Fish & Wildlife Service, NOAA Office for Law Enforcement, and the Canadian provinces of Nova Scotia and New Brunswick. Stevens holds a Bachelor of Science with honors in Natural Resource Conservation from Cornell University and recently became a pilot for DEC’s Unmanned Aircraft Systems (UAS) program, and was deployed to Puerto Rico last year as part of a relief team that helped the island regain electrical service. As a member of the Bureau of Environmental Crimes Investigation (BECI) unit, Stevens conducted criminal investigations with successful prosecutions in cases involving the illegal commercialization of fish and wildlife, hazardous waste investigations, and a fatal hunting-related shooting incident. This case required a particularly delicate approach, working closely with other agencies and prosecutors, and resulted in a guilty plea by the perpetrator. Stevens, who lives in Central New York and is currently a member of the DLE’s Training Academy staff, enjoys spending time with his family and dog and piloting airplanes in his free time.

On June 11, ECO Jason Smith received a tip that a timber rattlesnake, a threatened species in New York, had been killed by a contractor at a construction site in the town of Woodstock. ECO Smith interviewed several sub-contractors at the job site about the incident, but none gave a statement. After a brief search, the carcass of the snake was found with the head and rattle removed. Several days later, ECO Smith returned to the construction site to meet with an individual suspected of being involved in the incident. From there, ECO Smith tracked down the man in possession of the rattle. The rattle was recovered and the contractor was issued a summons for possession of threatened species parts, returnable in Town of Saugerties Court. 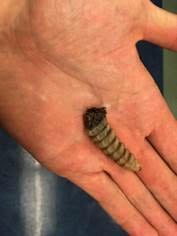 On June 17, ECO John Gates was alerted by a local citizen of a moose carcass south of Old Forge in the town of Webb. Gates found the moose carcass down an embankment on the side of an abandoned road. The moose had been dead for several days, as it was decomposed and had been fed on by other animals. However, two small holes were visible in the chest cavity behind the shoulder. DEC Pathologist Kevin Hynes visited the site to perform a field necropsy. Although it was 80 degrees, Hynes dissected and assessed the cause of death. He determined the animal had not been shot, but died as a result of a fall down the steep embankment, suffering two broken vertebrae.

On June 19, ECOs Spencer Noyes and Ron Gross were checking fishermen in Monroe County when an angler said he did not have his fishing license but did have an ID the ECOs could use to look it up. When the man went to his car to retrieve his ID, the ECOs could smell the odor of marijuana coming from the vehicle. The man did not have a valid fishing license and his driver’s license had been revoked due to multiple violations and unpaid fines. When the man was asked about how he arrived at the location he became visibly nervous, telling a long-winded story about the car, which did not belong to him, and how he was driven to the location by another individual, who was then picked up and went fishing elsewhere. The ECOs advised the man that the car was going to be searched due to the odor of marijuana and that he would be charged with anything in the car because he was currently in possession of the vehicle. The man admitted that there was some marijuana in the center console, and when ECO Gross searched the car, he found marijuana, a scale with white residue on it, a razor blade, approximately two grams of a white substance consistent with crack cocaine, and IDs belonging to the man and other individuals. The ECOs arrested the fisherman, charging him with fishing without a license. In addition, the Greece Police Department charged him with criminal possession of a controlled substance 4th degree, criminal possession of drug paraphernalia 2nd degree, aggravated unlicensed operation of a motor vehicle, and unlawful possession of marijuana.

On May 29, ECO Kevin Wamsley received a call that a landscaping company had been dumping materials in a state-regulated wetland in the town of Carmel. Wamsley visited the area and determined that the materials were dumped in a wetland area. After several attempts to contact the owner of the company responsible for the dumping of the material, ECO Wamsley finally caught up with him on June 20, and a meeting was set up that day at the site. Wamsley explained the violations to the subject and pointed out the telltale signs of a wetland habitat. The individual admitted to dumping the materials at the site. A summons was issued for conducting regulated activity in a state wetland, returnable in Town of Carmel Court. DEC habitat protection staff will determine the necessary remediation for the site.

On June 23, ECO Mark Colesante located a vehicle in the parking lot at Mud Lock on the Seneca River in the town of Aurelius matching the description of a previous complaint of a man taking bass out of season. ECO Colesante spotted a fisherman catching sunfish on almost every cast. When other fisherman would come near, he released the fish back to the water. As the subject eventually packed up to leave, he threw an empty fishing hook package into the river. ECO Colesante followed the man toward the parking lot. When the fisherman reached the edge of the woods, he stopped and appeared to be watching the parking lot for signs of observers. When he finally looked behind him, ECO Colesante said, “Are you looking for me?” The man had a cooler containing 80 sunfish, 30 fish over the daily limit. ECO Colesante issued the subject tickets for taking over the daily limit of sunfish and depositing trash into the navigable waters of the state. The man was arraigned at Aurelius Town Court and paid $200 in fines and surcharges.

On June 24, 2018 ECOs Zach Kochanowski and Josh Jarecki received a call that two fishermen were catching large numbers of sunfish and keeping them in a bucket at Van Cortlandt Park. While in other parts of the state it is legal to take any size bluegill with a daily bag limit of 50, within the five boroughs of New York City, freshwater fish must be released immediately without harm. It didn’t take long for the ECOs to locate two fishermen matching the description given by the complainant. As the officers approached, the men covered a white bucket. After a brief interview, the fishermen agreed to open the bucket, revealing a total of 118 sunfish. ECO Kochanowski and Jarecki were only able to release 11 fish that were still alive back into the lake. The other 107 illegally taken fish were confiscated. The two fishermen were issued a total of five summonses, including failure to release without undue harm, and fishing contrary to specific catch and release-only regulations. One of the men was issued a ticket for fishing without a freshwater fishing license. All tickets are returnable in Bronx County Court in September.

Keep up with news of the Park. Subscribe to the Adirondack Explorer today: https://goo.gl/PeuX5X