“You Can’t Put That There” – Sullivan County

On June 28, ECO Tom Koepf received a call from the Town of Bethel Code Enforcement Office regarding a local religious camp that had generated a large pile of solid waste on its property. Officer Koepf and a Bethel Code Enforcement Officer visited the camp and observed a large pile of garbage that had been discarded on the camp’s property across the road from the main headquarters. Koepf spoke to a manager from the camp, who admitted that the camp had been discarding garbage into the pile, with no plans of removal. The camp was cited for the Unlawful Disposal of Solid Waste and Operating a Solid Waste Management Facility Without a Permit, returnable to the Town of Bethel Court.  The camp was also issued violations from the Code Enforcement Officer and advised that the garbage needed to be properly disposed of in dumpsters in the near future. 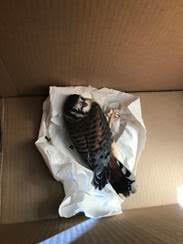 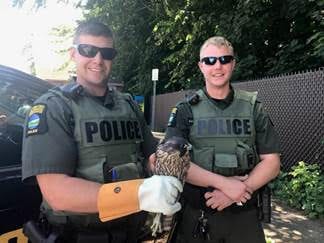 On June 26, ECOs Matt Thibodeau and Zach Kochanowski received a call regarding an injured peregrine falcon at JFK Airport in Queens County. ECOs Thibodeau and Kochanowski met with employees in the cargo area who had already placed the falcon in a large box to await the officers. The falcon had an injured wing and was not able to fly, so the ECOs transported the bird to a wildlife rehabilitator in Nassau County near the airport. Later that day, ECO Dan Plows received a complaint that a fledging hawk in Bronx County had fallen out of a nest. ECO Plows responded, determined the injured bird was a fledging kestrel, which he took to the same rehabilitator in Nassau County.

Snake in the Ceiling – Oswego County 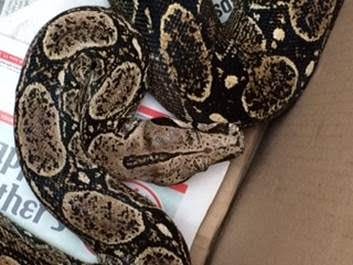 On June 29, ECO Matt Foster responded to an unusual complaint in the village of Pulaski. The panicked caller reported that a large snake had fallen from the ceiling onto a subject sleeping in his bedroom. After a brief investigation, the officer determined the six-foot-long Red-Tailed boa constrictor had escaped its enclosure in the apartment above and entered the ceiling. The snake, which is legal to possess in New York, was reunited with its owner.

Fawn Rescues in Central New York and the Southern Tier 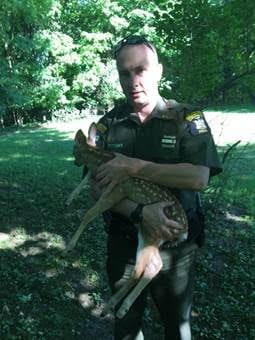 June 25, was a busy day for ECOs as numerous reports of fawns needing assistance were fielded by Region 7 officers. In the city of Binghamton, ECO Andy McCormick responded to a report of a fawn trapped in the backyard of an abandoned property surrounded by a six-foot-high chain link fence. ECO McCormick responded to the scene with Lt. Ric Warner and Investigator Rob Johnson. The officers scaled the fence and found the fawn in the high grass and moved the fawn to the other side of the fence. A doe appeared as soon as the fawn bleated, and the lucky fawn was seen leaving with its mother. Meanwhile, in the town of Nichols in Tioga County, ECO Stan Winnick and DEC Air Resources specialist Tom Gragg responded to another complaint of an abandoned fawn. A farmer noticed a vehicle stopped alongside the farm for a period of time before driving away. Checking where the car had stopped, the farmer found a small fawn with a bottle of milk. After determining the mother was not nearby, ECO Winnick transported the fawn to the nearest licensed Wildlife Rehabilitator. In the town of Onondaga, ECO Paul Sherman and Lt. Dave McShane responded to a complaint of a fawn trapped after falling into a five-foot-deep hole surrounded by a wooden structure. The pit had been constructed by the homeowner to protect a tree when fill was brought in to raise the level of the yard. The wooden structure was intended to keep people from falling into the pit, with just enough space to allow the young deer to fall in and become trapped. After the complainant removed a few boards from the structure, the officers freed the fawn using a catch pole and rope. The animal was released in the backyard to reunite with its mother. 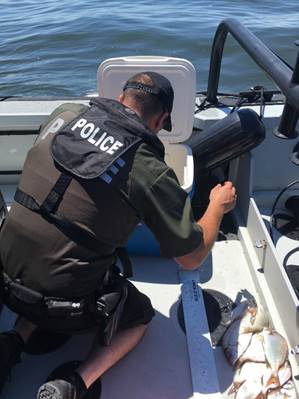 On June 30, ECOs Craig Tompkins and Kevin Wamsley patrolled on Long Island Sound for Operation Dry Water, a nationwide enforcement detail focused on identifying individuals boating while intoxicated (BWI). ECOs Wamsley and Tompkins boarded 19 vessels during the day, but found no BWI offenses. However, the ECOs did encounter violations of the Environmental Conservation Law. As the officers approached one vessel, a man on board tried to straddle a five-gallon bucket in an attempt to make it less visible to the ECOs. After asking the individuals on board who had caught and kept fish on the vessel, the man reluctantly pulled out the five-gallon bucket and handed it to the ECOs. At the bottom of the bucket, hidden under legal fish, the officers found several undersized porgies. The man was issued the appropriate summons. Another vessel was discovered with short porgies on board and a summons was issued to the individual in possession. The following day, Sunday, July 1, ECOs Dustin Dainack and Craig Tompkins conducted boat patrol for Operation Dry Water and issued additional summonses for undersize porgy, undersize fluke, and no marine registration. All cases are pending in the City of Rye Court.