Home » News Releases » Rescues and a dog bite on the trails 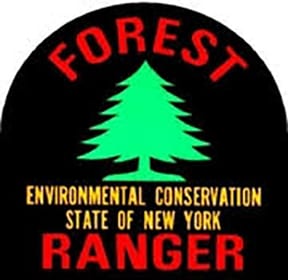 From a DEC news release:

“Across New York, DEC Forest Rangers are on the front lines helping people safely enjoy the great outdoors,” said DEC Commissioner Basil Seggos. “Their knowledge of first aid, land navigation, and technical rescue techniques are critical to the success of their missions, which take them from remote wilderness areas with rugged mountainous peaks, to white-water rivers and throughout our vast forested areas statewide.”

Town of Elizabethtown
Essex County
Search:
At 7:50 p.m. on Aug. 29, DEC’s Ray Brook Dispatch received a call from a relative reporting two female hikers stranded after dark in the Giant Mountain Wilderness. The two hikers found themselves caught in a torrential downpour and were ill prepared when they ran out of daylight while descending from Rocky Peak Ridge. A Forest Ranger responded, located the pair, provided lights, and assisted them out to the trailhead safely by 10:30 p.m.

Town of Rockland
Sullivan County
Enforcement: On Aug. 31 at approximately 10:15 p.m., DEC Mongaup Pond Campground staff contacted DEC’s Central Dispatch about a loud, unruly group that would not comply with campground staff. New York State Police were notified and quieted down the group. At the request of the campground caretaker, Forest Rangers responded the next morning and evicted the campers. Summonses were issued for failure to obey campground staff, failure to keep a neat, clean and sanitary campsite, failure to obey quiet hours, and cutting down trees on state land.

Towns of Warrensburg and Fort Ann
Warren and Washington County
Public Safety/Enforcement: Warren County Department of Health advised DEC of a dog bite that occurred at the Hudson River Recreation Area in the Lake George Wild Forest. On Aug. 31, a Forest Ranger following up on the complaint interviewed a group of three subjects with several dogs at their campsite. From information obtained from the complaint and observations at the site, the group was ticketed for allowing dogs to run freely on lands inhabited by deer. The group was evicted from the site for camping longer than permitted. The same group was encountered the next day by a different Forest Ranger at the Shelving Rock area of the Lake George Wild Forest and was evicted for camping without a permit.

Town of Inlet
Hamilton County
Enforcement: On Sept. 1, staff at Limekiln Campground received multiple complaints from campers about a loud party, arguments with profanity, and unsafe vehicle operation in the early morning hours. Forest Rangers arrived and interviewed complainants and other campers from adjacent sites. The occupants of the offending site were awakened by Rangers and interviewed. The offending campers admitted to being loud and using profanity in the overnight hours. Forest Rangers issued an eviction notice and tickets were issued for failure to observe quiet hours in the campsite.

Town of Sharon
Schoharie County
Search: On Sept. 1 at 9:04 p.m., Forest Rangers were requested by Schoharie County 911 to assist in locating a 15-year-old autistic male who had left his residence after an argument. The male had run off into nearby fields. Schoharie County Sheriff’s Department, the county search and rescue coordinator, and Cobleskill Police Department personnel were already on scene with a K-9 team searching the area along with family members on ATVs when Forest Rangers were requested. Forest Rangers quickly assessed the resources present, organized searchers, made assignments, and requested State Police Aviation for helicopter-based infrared scanning technology. A passerby aware of the search effort reported seeing the subject on the side of the road and reported this sighting to the command post. The subject was located 2.4 miles from his last known location and returned to his home in good health.

Town of North Elba
Essex County
Rescue: At 1:30 p.m. on Sept. 2, a radio communication from the Algonquin Peak summit steward to DEC’s Ray Brook Dispatch reported an unstable lower leg injury near the summit of Algonquin in the High Peaks Wilderness. A 29-year-old male from Quebec, Canada, was descending the second highest peak in New York State when he took an injury-causing bad step. Weather prevented a helicopter rescue. Forest Rangers were dispatched to the Adirondack Loj for a carry-out. Assistant Forest Rangers were requested to assist along with the summit stewards from Algonquin and Wright peaks. By 5:45 p.m., the hiker had been assisted to a lower area and a break in the weather allowed a State Police Aviation helicopter to pick up the subject and deliver him to the Adirondack Medical Center in Saranac Lake.

Town of Inlet
Hamilton County
Rescue: At 5:04 p.m. on Sept. 2, DEC’s Ray Brook Dispatch received a call through Herkimer County 911 reporting an 18-year-old female with an ankle injury near the summit of Black Bear Mountain in the Moose River Plains Wild Forest. The female hiker had made a bad step while descending the steep trail back to Route 28 and injured her ankle. Forest Rangers were sent to the scene to assist. Fire departments from Inlet, Eagle Bay, and Old Forge, as well as the Town of Inlet Police Department were also on scene to assist with the long carry-out. At 9:54 p.m., the injured hiker was back to the trailhead and on her way to a local hospital for further treatment of her injury.

Town of North Hudson
Essex County
Search: At 3:05 a.m. on Sept. 3, a call came into DEC’s Central Dispatch reporting a 31-year-old male hiker overdue in the Dix Mountain Range of the High Peaks Wilderness. The hiker’s starting point and itinerary were not immediately known. A Forest Ranger was dispatched to locate the subject’s vehicle and check trail registers. Additional Forest Rangers were requested to start trail sweeps at first light from all sides of the range, covering all possible exit points along the trail system. At 8:25 a.m., the subject was located by Forest Rangers covering the trails off Elk Lake Road. The hiker had underestimated the difficulty and time of the route and when located was tired but in good shape. As the hiker was still a considerable distance back to his starting point, he was guided to the closest trailhead and given a courtesy ride back to his vehicle.

Be sure to properly prepare and plan before entering the backcountry. Visit DEC’s Hiking Safety and Adirondack Backcountry Information webpage for more information.