“Across New York, DEC Forest Rangers are on the front lines helping people safely enjoy the great outdoors,” said DEC Commissioner Basil Seggos. “Their knowledge of first aid, land navigation, and technical rescue techniques are critical to the success of their missions, which take them from remote wilderness areas with rugged mountainous peaks, to white-water rivers, and throughout our vast forested areas statewide.”

Town of Lansing
Tompkins County
Search:
At approximately 1:35 p.m. on June 18, the Tompkins County Sheriff’s Department requested Forest Ranger assistance to find a missing 21-year-old female with developmental disabilities who does not speak English. The subject was last seen on June 17. Forest Rangers were dispatched to the scene, organized searchers, and initiated different search techniques. The woman was located and turned over to EMS for medical evaluation.

Town of North Elba
Essex County
Wildland Search:  At 6:04 p.m. on June 18, DEC Ray Brook Dispatch received a call from the Adirondack Loj reporting an overdue 68-year-old hiker separated from his hiking partner while on the Indian Falls loop. The pair had separated at Avalanche Camps at 12:46 p.m., with the faster hiker going ahead. The missing hiker did not meet his companion before dark, and Forest Rangers initiated search efforts. When the missing hiker was not located during initial search efforts, additional resources were called to the ADK Loj. Responding searchers eventually encountered the missing subject at the Loj in good health. 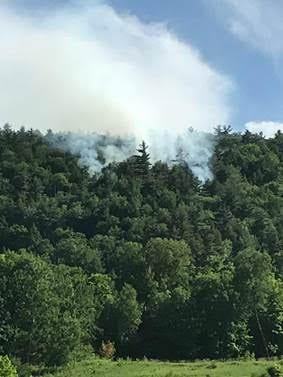 Town of Crown Point
Essex County
Wildland Fire:  On June 19, Forest Rangers were notified of a possible wildland forest fire on Buck Mountain in Crown Point. Rangers responded and found that a lightning strike resulted in fire burning aerial, surface, and ground fuels. The fire was contained at 3.5 acres within 24 hours. Forest Rangers, with assistance from two inmate crews from Moriah Correctional Facility, worked for another two days to control and extinguish the fire. Rangers will continue to check the fire area and extinguish hot spots within the fire control perimeter.

Town of Petersburg
Rensselaer County
Wildland Search:  On June 19 at approximately 3 p.m., Forest Rangers were dispatched to the Petersburgh Pass area of the Taconic Ridge to search for a group of five lost hikers. The hiker that made the initial call to 911 provided coordinates. Another member of the group, a 70-year-old male subject, was having severe leg cramps possibly due to dehydration and could no longer hike. Type I search teams were assembled with members from Grafton and Petersburgh fire departments, New York State Police, Williamstown (Massachusetts) fire, and Pownal (Vermont) fire. New York State Police Aviation was also dispatched but had limited visibility of the ground due to thick tree canopy. At 5:35 p.m., a Forest Ranger and a volunteer searcher located the lost hikers at a lean-to in the Hopkins Memorial Forest close to the tri-state border monument. The Ranger and volunteer treated the dehydrated hiker and helped the group make their way down the mountain to Krum Hill Road in Vermont. During an interview after the rescue, Rangers established the group took a wrong turn based on incorrect information on Google maps and took a trail east from New York into Vermont and Massachusetts until they reached the lean-to back in New York. At 8 p.m., all of the lost hikers and search members were transported back to their vehicles at Petersburgh Pass in New York.

Town of North Elba
Essex County
Wildland Search: On June 22 at 12:38 p.m., DEC Ray Brook Dispatch was contacted regarding a 52-year-old male from Phoenixville, PA, who had fallen while descending and injured his ankle 1.5 miles from the summit of Mt. Marcy. Forest Rangers and an assistant Forest Ranger were dispatched to provide assistance. The subject was reached at 2:10 p.m., and after Rangers evaluated and rendered aid, the subject was assisted to Marcy Dam and then to the ADK Loj. The subject sought medical attention on his own. The incident concluded at 4 p.m.

Town of North Elba
Essex County
Wilderness Search:  On June 22 at 5:37 p.m., Ray Brook Dispatch received a request for assistance to locate two males, ages 12 and 42, from Glenville, who became separated from another hiker while hiking Cliff and Redfield mountains. The three subjects started at the Upper Works at 8 a.m. One subject went two miles ahead to the Redfield and Cliff herd path junction. The other hikers never showed up. A Forest Ranger responded to the Upper Works Trail and requested the Lake Colden caretaker start interviewing subjects and head in the direction of the Redfield and Cliff trail intersection. After interviewing several people, the caretaker documented sightings of the pair indicating that the 12-year-old and 42-year-old were reunited and hiking toward the trailhead. The subjects were located at 8:10 p.m., hiking toward the Upper Works trailhead. They were reunited with the reporting party and the incident concluded at 8:30 p.m.

Town of North Elba
Essex County
Wildland Search:  On June 22 at 10:51 p.m., DEC Ray Brook Dispatch received a transferred call from Essex County 911 from a 57-year-old woman from Buffalo who was off trail and had no working headlamp or flashlight. The subject was hiking Street and Nye mountains. Cell phone coordinates placed the subject near Indian Pass Brook. One Ranger was dispatched to retrieve the subject. Voice contact was made with the subject at 1:14 a.m., and she and the responding Ranger were out of the woods at 2:58 a.m.

Town of Windham
Greene County
State Land Protection:  On June 23, Forest Rangers received information from the local police that a large graduation party was being planned in South Mountain State Forest. Forest Rangers, two New York State troopers, and two sheriff’s deputies arrived at the site at midnight. Police encountered a party with approximately 75 individuals attending, many appeared underage. Several tickets were issued for possession of an alcoholic beverage by a person under the age of 21. An appearance ticket was also issued for unlawful possession of marijuana. Officers ensured that drivers were not impaired and the party was dispersed.

Town of Diana
Lewis County
Wildland Search:  On June 23 at 6:30 a.m., DEC Central Dispatch received a request for assistance for an 18-year-old male from Croghan who woke up disoriented in the woods. The subject reached out to a friend and told her he had wandered into the woods after attending a party at the gravel pit off Pachan Road in Diana. Forest Rangers were dispatched and performed a Type 1 search of roads in the area without success. During the search, the subject was located at 10:30 a.m., by ATV riders not associated with the search. The ATV riders returned the hiker to the last known point. During an interview with the subject, he stated he came out to Aldridge Settlement Road at 10 a.m. Subject had lost his shirt and shoes. The subject advised his cell phone was also dead. He refused medical treatment and was released to his father at 11 a.m.

Town of Fine
St. Lawrence County
Wildland Rescue: On June 23 at 9:17 p.m., DEC Ray Brook Dispatch received a request for assistance for a 22-year-old male from Webster and a 24-year-old male from Henrietta who were disoriented and exhausted on the Cranberry 50 Trail. The pair were out of provisions and needed assistance. The subjects advised they were near East Inlet Flow. A Forest Ranger took a boat across Cranberry Lake and located the subjects. They were brought back to Cranberry Lake DEC Headquarters and given a ride to their vehicle at the trailhead. The incident concluded at 11:45 a.m.

Town of Greenfield
Saratoga County
Wildland Rescue:  At 2 p.m. on June 23, a Forest Ranger responded to an ATV accident on Lincoln Mountain State Forest. At the scene, the Ranger assisted EMTs to help the injured subject who was conscious but confused.  The individual was transported by local ambulance to a hospital for additional medical care. Citations were issued to several individuals. The accident investigation is being handled by the Saratoga County Sheriff’s office.

Town of Colchester
Delaware County
Wildland Search:  On June 23 at approximately 5:15 p.m., Delaware County notified DEC Central Dispatch about a lost hiker in the town of Colchester. New York State Police, Colchester Police, Delaware County Sheriffs, Roscoe fire, Downsville fire, and Environmental Conservation Police Officers (ECOs) and a DEC K-9 responded with Forest Rangers. Searchers checked the area from the cell phone coordinates with negative results and requested additional Rangers. By 10:40 p.m., the other agencies cleared the scene. Forest Rangers continued to check the trails and drainages. At 10:50 p.m., the lost hiker was located by Forest Rangers in good health and he was walked out of the woods.

Town of Fenner
Madison County
Wildland Search: On June 24 at about 1:00 a.m., Forest Rangers were requested to help locate a missing 75-year-old man who suffers from dementia, Parkinson’s Disease, and asthma. The man was last seen walking behind a residence toward the woods, a swampy area with a deep flowing creek. The man had not taken his medications that evening. Forest Rangers responded, organized search efforts, and participated in the search. At approximately 9 a.m., two Madison County Sheriff’s Deputies conducting a search of buildings and structures on Nelson and Moraine roads located the missing subject.  He was stranded in hip-high water and mud in the forest just behind a trailer park. The man was conscious but confused. Fire department personnel helped the man out of the mud and carried him out to a waiting local ambulance. He was transported to the hospital in Syracuse for further medical evaluation. All units were clear of the scene by noon.