Wandering Home is Bill McKibben’s 10th book, and a most companionable and schmoozy read it is. The story tracks a 16-day summer hike from the summit of Vermont’s Mount Abraham, with its westward-reaching view of Lake Champlain and the Adirondack Mountains beyond, to his home of 20 years in Johnsburg in the southeastern Adirondacks.

In defiance of the travel writer’s usual custom of hewing to one state, parkland or nameable region, McKibben makes the great lake a hinge that binds the long lands on either side of it into a “cultureshed” bounded not by the cartography of politics but by his own deep knowledge of it. He’s not implying there’s some commonality of civic style or taste; in Vermont, it’s Subarus, in the Adirondacks, pickups, and never the twain shall meet. Or mostly never. What frames his vision of this stitched-together territory—“Adimont? The Verondacks?”—is the spirit of innovation and respect some people are bringing to its use. Which means, mercifully, that this is not a nature or travel book in any ordinary sense, although there is nature here in force and cartloads of crisp description and you could probably even use McKibben’s route to dope out your own hike (as one day, some doctoral candidate in environmental studies inevitably will). But in the end, the “witness trees” that blaze McKibben’s path are human. And lucky for us, the author’s eye for some very handy, clued-in, interesting people is eagle-true.

These are not characters or folksy rustics. McKibben isn’t after the quirky detail, the revelation of idiosyncrasy that shades so easily to a gentle condescension (amazing, really, when we recall that the author cut his teeth writing Talk of the Towns for The New Yorker). What draws him to his subjects isn’t how personable they are, it’s what they do, and how their work and sense of place sustain and improve each other. Their work is local, their loves are local, and they are locals (if often defiantly self-made), and proud of it. But not provincial. If their means are small, their aims are global, and they do try to keep their eyes on the prize. Some examples:

 Forester David Brynn, who urged Middlebury College in Vermont to line the walls of Bicentennial Hall with “flawed” wood rather than conventionally pristine sawboards taken from the “best” trees in the forest. The custom of “high-grading,” McKibben reports, “has left the forest of the Northeast filled with smaller and weaker trees.” Using wood “filled with little streaks and swirls and flickers that please the eye like the dance of flames in a fireplace” is not only aesthetically defensible and affordable, it could result in more healthy forests. Obviously, Brynn’s remedy for the stressed-out woodlots of his own Addison County has implications for forest anywhere.

Avid ornithologist Warren King from Ripton, Vt., whose weed-by-weed intimacy with the Dead Creek wildlife refuge that slopes down toward Lake Champlain gets the author pondering the unhelpfulness of glib divides between “wild” and natural,” or “invasive” and “native.” Nothing’s easy in the woods, King shows. Bird lovers plant fields to create the bird havens that will bring on bigger flocks—and, of course, more happy hunters to kill birds. Does this make sense? Well, yes. Ban the hunters and the snow geese, ever more abundant, would wreak even more havoc with the Arctic tundra than they do. So King respects the give-and-take, and McKibben sees his point. You pick and choose your fights, trying to stay “guided by a certain tropism toward the ‘natural’but governed by common sense and a dose of wry humility.” King may be the local scourge of purple loosestrife and water chestnut, but he draws the line on going after buckthorns. Everybody has a line.

 Another instance of environmentalism with an expressly pragmatic, non-doctrinaire edge: Once upon a time conservationists looking to shore up the patchwork of public holdings in the Adirondack Park had eyes only (or mostly) for the big stuff, the High Peaks, the storied uplands. Way up there you got your wilderness, and people got the valleys. This was, as former Earth First editor and environmental advocate John Davis tells McKibben, “the western model— wilderness in the rocks and ice, people everywhere else.” But slapping that model on the Adirondack Park meant that migratory wildlife was left without a safe, unbroken corridor from Lake Champlain to the High Peaks. 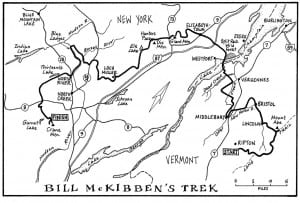 Davis and his friend, backcountry philanthropist Jamie Phillips, aim to recreate that corridor out of land parcels purchased through Phillips’s not-for-profit Eddy Foundation. And nothing new here. Loads of private conservation groups (not to speak of New York state) are redeeming land for the Park. What’s fresh about Phillips and Davis’s approach is its site-specific flexibility. But they do not leave every piece of recovered land alone to “rewild” itself. One site might get donated to Habitat for Humanity for a low-income home. Another buy, a glorious abandoned farm, might see the logged-over ridge that caps it returned to wilderness, while arable fields below go to work for the local organic bread baker so that “everything he makes, he makes with Champlain Valley wheat.”

Does it sound precious? Somewhere in his narrative McKibben drops the choice fact that the average head of organic lettuce gets transported even farther than the usual 1,500 miles non-organic food moves before it finds our dinner tables. Now, imagine if all that hard-travelin’ lettuce was grown within each salad-lover’s county. Or if half the bread your countrymen consumed was produced from locally grown wheat. Think of the savings, the drop in fuel use, the reduced emissions, the land returned to farming, the boon to local wallets. Not so precious now. Fashioning a conveyor of production and consumption that reaches from neighbor’s farmfield to your salad bowl may just be a more useful way to combat globalization than jetting to Seattle to protest the WTO.

The logic of this book is not methodical. McKibben never gets very far, for instance, with the early claim that Vermont and the Adirondacks “have so much to teach each other.” Points and ideas are lightly introduced, abandoned and then as casually recovered (no one loves a lecture, after all). But the lightness and delicacy of a spider web doesn’t make it any less a marvel of construction. There is a stern polemic here, and nothing casual about it. What McKibben’s people have in common is a quality of selflessness. They think of ends and needs beyond their own; they buck the national trend of “hyperindividualism”— they “have taken a step back,” not from some luddite sentimentalism but for a wider, more inclusive perspective. They know that “interfering with history is hard, because its momentum is so strong: the march of the big box stores, the decline in the number of farmers, the demographic tides of our population. But sometimes that history churns up its own countercurrents.” This book is the author’s homage to the local heroes who surf those countertides.

And many do! The Vermont hemp farmer perfects his eco-friendly product (hemp backpacks! hemp shampoo!) only to see his efforts outlawed by cannabis-phobic legislation. Now the hemp guy’s into biodeisel, another stubborn “attempt to interfere with history.” Mc- Kibben wishes him the best, but notwithstanding his subtitle for the book, “A Long Walk Across America’s Most Hopeful Landscape,” he’s discouraged, and it shows. Now and then, and never for very long, a bubble of fury breaks the surface of the author’s driven optimism. ATVs. Jetskis. Outsized McMansions on treeless lawns blocking public access to Lake Champlain. All tokens of the mefirst hyperindividualism the author has eloquently deplored for 20 years now, all humming, buzzing, whining with “the sound of a culture spinning out of control.” Sometimes he spells out what’s objectionable but mostly, and I think justly, he assumes his readers know pretty much what he means. No sense preaching to the choir, and anyway he knows we’re all of us on thin ice here. Environmental righteousness that plays well in Middlebury might not wash in Calcutta. McKibben may have the Prius in the driveway and solar panels on the roof, but he knows very well that any American, however conscientious, who enjoys a middle-class lifestyle, is still “a wild drain on the planet.” So best keep the rage in check.

Still, it’s good to see it. The bitten-back frustration at the core of the book gives it a darker, richer texture and a deeper credibility. Things were bad enough 16 years ago when McKibben published his ground-breaking book, The End of Nature, which warned the world about global warming. Now things are worse and getting more worse. The author’s not giving up, not close, but the tide is high and bearing down, and the brave souls who are profiled in this book as they gamely try to buck those swells need backup. Which may not mean switching to hemp conditioner and ripping out the invasive weeds along your local stretch of highway and buying local produce all at once. But learn the options. Think about it. We can’t fight every battle, but like Warren King we can probably handle a good, manageable few. That’s how it begins.