Home » Book Reviews » The Outside Story 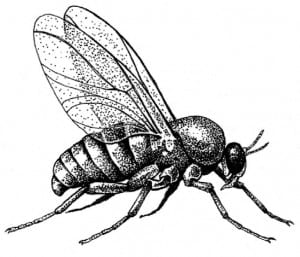 If you’ve ever stood on an Adirondack summit on a clear day and gazed eastward, you’ve seen the ghostly shapes of Vermont’s Green Mountains haunting the far horizon. Beyond them, hidden from view, lie New Hampshire’s higher and more rugged White Mountains, “white” because they hold snow much of the year. Those ranges and the valleys they cradle represent a world apart. Every time I skim Lake Champlain on an eastbound ferry, I feel as though I’m crossing Lake Geneva, bound for Switzerland.

Still, as alien as the territory on the far side appears at a distance, you don’t need a passport to go there. What’s more, despite differences in geologic history (the Adirondacks are a still-rising outlier of the ancient Canadian Shield, whereas the Greens and Whites are part of the Appalachians), the life that inhabits the two places, the biota as scientists put it, shares much in common.

Which is why we in the isolated and insular cultural citadel called the Adirondacks would do well to read The Outside Story. The book was published recently by Northern Woodlands, an organization in Corinth, Vt., that promotes responsible forest stewardship and publishes Northern Woodlands magazine.

The Outside Story owes its existence to a bequest from a Schenectady- born lawyer named Marguerite Wellborn whose passion for nature bloomed after she retired to Hanover, N.H. When she died, she left a tidy sum to form the Wellborn Ecology Fund. Its officers recruited Northern Woodlands to produce a weekly nature column for regional newspapers. The book collects the best of the pieces published so far.

This is a terrific book. Chuck Wooster, the volume’s editor, begins with a humble plea for readership. It concludes: “We’re not intending for this book to be the last word or the exhaustive text. But we do promise that it will be a lively read and that you’ll remember something when you’re done. So whatever the season, we invite you to kick back, open the book, thumb through it, and enjoy an essay or two.” 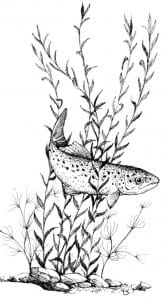 Don’t be so modest, Chuck! This is a dazzling compendium. Readers won’t settle for just “an essay or two.” They’ll want to bolt the whole banquet, in one sitting if they can.

Scan the contributor’s list. You’ll find nearly all the best nature writers at work in Vermont and New Hampshire today. Among them are Burroughs Medal winner Ted Levin, Alan Pistorius, Joan Waltermire, Madeline Bodin, Ken McFarland, Michael Caduto and Catherine Tudish. It is illustrated throughout by the deft drawings of Adelaide Tyrol.

I’ve never had the pleasure of meeting Ted Levin, but he’s been a favorite author of mine ever since I read his naturalist memoirs Backtracking: The Way of a Naturalist (1987) and Blood Brook: A Naturalist’s Home Ground (1992).

Levin has eight pieces in The Outside Story. Their topics— weasels, bald eagles, spotted salamanders, bullfrogs, ambush bugs, fall overturn in lakes, winter survival of the sugar maple, and coyotes—all demonstrate that while this is a book about someplace else, it offers much to help us understand the Adirondacks.

A fount of surprising facts and nimble writing, Levin supplies food for thought in every paragraph, such as: “The paper birch and red osier dogwood that pepper our wetlands can survive submersion in liquid nitrogen at -321° and still recover upon thawing.” That’s cool. Levin explains how the trees do it. They encourage nearly all the water in their cells to migrate out to intercellular spaces, where it freezes and forms ice crystals that do little damage to the tender living cells next door.

Like to know more about the black fly, notorious scourge of the North Woods? Biologist Bill Amos contributes a cogent piece on the fascinating biology of these coldwater-born, abrasive-mouthed blood-lappers. Cogent is a word that applies to all the pieces in this book. They’re tight, they’re solid, and they guide the reader briskly and engagingly into their subject matter. 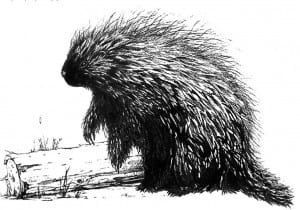 Among the tastiest treats is Alan Pistorius’s “Litter Bugs.” It’s about springtails, (also known as “snowfleas”) bizarre but ubiquitous six-legged invertebrates that still turn up in insect field guides although scientists now place them in a class all their own. This is the kind of subject a lesser naturalist and writer might have tackled blandly, in such a way as to induce deep sleep. But Pistorius is at the top of his game. “When an assemblage [of springtails] has detected your presence,” he writes, the tiny creatures “will begin to jump, and because the human eye can’t follow them in flight, the pool of organisms will seem simply to evaporate. It is, as far as I know, the only demonstration in nature of the reverse of spontaneous generation.”

There’s not a clunker among these pieces. The range of subject material is wide and perfectly suited to appeal to Adirondack enthusiasts. Whether you’re keen to know about eels or porcupines, mountain summit flora or the great blue heron’s nesting habits, the hibernating behavior of spring peepers or what science has revealed about the so-called “frost cracks” in Northern hardwoods, there’s plenty here to delight everyone.

I’m impressed not simply by the quality of the articles in The Outside Story, but also by the way its editor wove together 72 disparate tales of nature, nurture and environmental troubles. This is a collection that readers will turn to again and again.