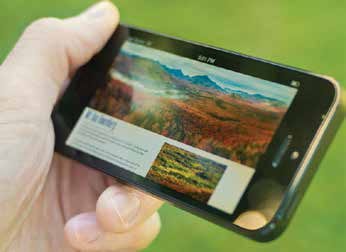 A photo app for autumn.

You never know just how good leaf-peeping season will be. That’s OK—you can always get a dose of spectacular color in Chris Tennant and Adam Baker’s new e-book, Photographing the Adirondacks: Fall in the High Peaks Region.

The 104-page PDF is available as a $7 download from www.adkbook.com. Unlike Carl Heilman’s book, Tennant and Baker’s book focuses on just one part of the Adirondacks, picking twenty-five locations where you might find great shooting. (Tennant included some of these tips and photos in an article about the Adirondacks in the October issue of Popular Photography.)

Tennant and Baker feature many two-page spreads and full-page images. And the images are often spectacular, soaked with color, draped in fog, or aglow with magic-hour light. I read the book on an iPad, and I frequently wished for an even bigger screen to stare at the images.

The authors exhort the reader to plan ahead and to know sunrises and sunsets; there are several sections on technique, including how to photograph waterfalls, convert images to black and white, and use long exposures. There’s also a section on photographing at night, which is fine, but fall colors don’t really pop in the dark.

Conveniently, the e-book contains GPS coordinates to get to trailheads. It could have used a map with all the featured locations on it, though. The photos also include technical data, such as exposure information, focal lengths and filters used.

Tennant and Baker are terrific photographers, but as copy editors, they could use a little help. Mount Van Hoevenberg is misspelled throughout, for example, and I’m still trying to figure out this passage: “With the clouds whipping over the summit of Whiteface Mountain, a 1-minute exposure was. The deep blue color of the sky would make a pleasing conversion to black and white and the application of a (digital) red filter in post-processing to render the blue areas of the sky black.”

None of that, though, eroded this book’s value as a photographic reference. If it were a print book, it would look good on a coffee table, too.