Mount Marcy has been a prime focus for Adirondack climbers ever since that day in 1837 when William Redfield and company first ascended the peak and ascertained that it was indeed the highest mountain in New York.

Since then, many pages have been written about Mount Marcy, but until now no one has set out to gather all of the history and lore of this fabled peak into one volume. Sandra Weber has done a prodigious amount of research and succeeded in the even more difficult task of presenting her information in a way that is both carefully documented and highly readable.

Starting with the rock itself, Weber offers just the amount of geology that the layperson is likely to remember and then moves on to a short history of the MacIntyre Iron Works and the first ascent of Marcy. Her telling of the first ascent resolves, probably as much as possible, the details of time, route and personnel on that expedition. Weber then raises the issue of the naming of the mountain for Gov. William Learned Marcy—a politician who probably never even saw the peak that bears his name. Critics like to point out that Marcy is best remembered for once declaring that “to the victor belong the spoils,” from which we get the term spoils system.

Weber paints a more favorable portrait of Governor Marcy by tracing his distinguished career, which included narrowly missing his party’s nomination for president in 1852 and serving as secretary of state from 1853 to 1857. Weber argues that Marcy took a keen interest in the 1836 exploratory expedition and had apparently expressed interest in taking part in the first ascent in 1837. Thus, William Marcy seems more deserving than the six other governors whose names have been given to Adirondack summits—with the possible exception of Teddy Roosevelt, who explored in the Adirondacks and was recently honored by the naming of TR Mountain.

Weber documents the many attempts in the 19th century to change the name of Mount Marcy. She makes it clear that the name Tahawus—the most successful alternative was entirely the work of the English author Charles Fenno Hoffman. But she also explains that the enduring appeal of Tahawus lies partly in the European settlers’ desire to pay tribute to the Native Americans whose land they had taken and whose way of life they had destroyed. Weber concludes that Mount Marcy will likely always have two names and that the carefully worded plaque on Marcy’s summit resolves the dichotomy in a perfectly acceptable way: “Also known by the Indian name TAHAWUS meaning CLOUDSPLITTER.” Thus, the plaque recognizes the name without claiming that Native Americans actually used it.

In describing other early ascents of Marcy, Weber uses journal entries to help capture the incredible adventure of climbing the peak before trails were regularly marked or maintained. Included are the best tellings I have found of both Teddy Roosevelt’s dramatic climb and descent in 1901 and the humorous antics of Matilda (as in “Hitch-Up”) Fielding at Avalanche Lake. And speaking of Matilda, from the descriptions of the clothes worn by the early female climbers, we can only conclude that they were at least twice as tough as the men who accompanied them— although Weber does record incidents where jackknives were used to make scandalous modifications when the long dresses were too hot or were snagging too many roots. 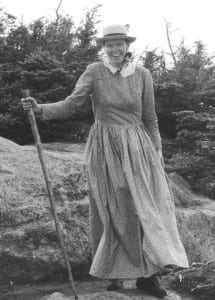 It was often the women who kept the journals, and Weber gleans many wonderful quotes from these early adventurers. In 1864, Lucia Pychowska records that she, her brother and a woman named Elsie hired Old Mountain Phelps and two other Keene Valley guides for an ascent via the Upper Ausable Lake and Phelps’s newly constructed trail. In describing her attire for the trip, Pychowska shuns the latest fashions but suggests women can still wear “pretty” things so as not to “spoil it [the landscape] by ugliness in color or repulsiveness in form.”

Later, in commenting on the camp food, she deemed the “hasty pudding (corn mush) eaten with butter and maple sugar a dish for a king and therefore well suited to the sundry of the sovereign people, only Elsie and I, having no vote, cannot in any sense be called sovereign.” Besides injecting women’s rights into the description of a camp meal, Pychowska noted with despair the amount of ecological damage done at their campsite—another issue on which she was way ahead of her time.

While Marcy saw many more visitors in the decades after the 1837 expedition, an ascent remained a major undertaking until 1920, when the state acquired the summit and surrounding land and began to promote public use. This promotion included the construction of trails and shelters and publication of a “Trails to Marcy” brochure. Thus began the ever-increasing use levels and the accompanying controversy about what to do about the situation. Weber starts this phase of Marcy’s history with a good summary of the debate over the 1928 construction of a stone shelter on the summit. Proponents said the shelter was necessary for the safety of hikers, some of them not very skilled, while opponents argued that such an accommodation merely attracted more people who were even less prepared because they knew that the shelter was there.

The 1967 removal of the hut did nothing to slow the growth in the numbers climbing Mount Marcy. Several of Weber’s final chapters describe efforts by the state and by private organizations such as the Adirondack Mountain Club (ADK) and the Adirondack Forty-Sixers to halt and even reverse the damage that had been done. In 1974, volunteers removed more than four tons of trash from the summit. Thereafter, a new breed of forest rangers, including Pete Fish, made sure that the spruced-up Marcy would not return to being the highest dump in the state.

Weber also describes scientist E. H. Ketchledge’s efforts to preserve the alpine flora that exist above timberline. After demonstrating that these fragile plants can be restored, Ketchledge pushed for hiring summit stewards to educate hikers and protect this unique environment. Marcy’s summit probably will never look as it did in the earliest photos, but the plants are making a comeback.

In her analysis of the state’s management plan for the High Peaks, Weber recognizes that many questions about Marcy’s future remain unanswered, especially if use levels continue to rise. She even raises the question, “Should you climb Mount Marcy?” Nevertheless, the overall sense of the concluding chapters is that today’s hikers are doing far less damage to Marcy’s wilderness character than earlier hikers had done. It seems that Marcy will be able to withstand the crowds of hikers into the foreseeable future. Underscoring this point is a photo of the author’s 8-year-old daughter (named Marcy) on the summit. The text beneath reads: “Mount Marcy is a space where even the youngest of souls can feel the elements and connect with natural forces.” Clearly, the appeal of Mount Marcy, as captured on the preceding pages, is as powerful as ever.