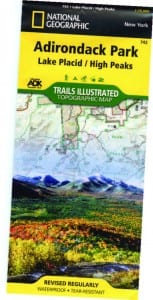 The Adirondack Mountain Club has issued the fourteenth edition of its popular High Peaks Trails guidebook, and some might say it’s bigger and better than ever.

It’s part of ADK’s plan to revamp its Forest Preserve series of guidebooks. For years, the club has published six guidebooks that together cover the entire Adirondack Park (in addition to a separate book for the Northville- Placid Trail). ADK is reducing the number of books from six to four, meaning each book will cover more territory. Hence, the larger format.

“There’s more information in each volume. We wanted to keep them from getting too chunky,” said John Kettlewell, ADK’s publications director.

In fact, the new High Peaks Trails is slightly slimmer than the previous edition: 280 versus 296 pages, despite containing more content.

The new guidebook encompasses not only the High Peaks region, but also a large swath of the Champlain Valley that formerly had been the province of the Eastern Trails book. David Thomas-Train, the editor of the eastern book, is listed as a co-editor of the new High Peaks book, along with Tony Goodwin.

Kettlewell acknowledged that some hikers have complained about the larger format, but he said the new book still fits well into backpacks and jacket pockets.

The other big change is that guidebooks in the Forest Preserve series will no longer come with ADK’s foldout maps tucked inside the back covers. Rather, the books are designed to be used in tandem with National Geographic’s fi ve Trails Illustrated maps for the Adirondack Park.

No doubt some hikers will grumble that they have to shell out extra money for the maps, but it’s not a bad deal if you do the math.

The older guidebooks cost $19.95 each. So a full set (not including the Northville-Placid book) cost $119.70. ADK has not raised the price of the new books, and since you will need only four, a full set will cost $79.80, but that’s without maps.

ADK will bundle each of the new books with a Trails Illustrated map for $26.95. So a full set with maps will cost $107.80—still less than the older set of six books. But since there are five maps and four books, the Trails Illustrated Saranac/Paul Smiths map (of particular interest to paddlers) must be purchased separately for $11.95, raising the cost of a full set of books and maps to $119.75.

That’s an extra nickel. And for that nickel, you get full-color, waterproof, tear-resistant maps that cover the whole Park. In contrast, ADK’s guidebook maps cover only portions of the Park, are made of regular paper, and lack the vibrancy of full color. The Trails Illustrated maps also contain more information about local roads and recreational facilities.

Because of its partnership with National Geographic, ADK is discontinuing its own maps with the exception of its High Peaks map, which is being updated and redesigned. Kettlewell said one change is that the new map will include campsite locations. It also may be larger. The map should be available next year.

The club hopes to publish all four of the new guidebooks by the end of this year. So far, it has released only the High Peaks Trails and Eastern Trails books.

Apart from the larger format, the design of the books has not changed radically. Flipping through the High Peaks book, I noticed that there are more photos, and they appear crisper than those in earlier editions, perhaps due in part to brighter paper. Each trail also includes a reference to its location on the appropriate Trails Illustrated map and, where applicable, on ADK’s High Peaks map.

Tony Goodwin, the longtime editor of the High Peaks book, said the fourteenth edition describes a number of trails not found in previous ADK books, including routes to Bear Den and Flume Knob, two stellar lookouts near Whiteface Mountain in Wilmingon, as well as several routes in the Champlain Area Trails System.

The High Peaks book is meant to be used with National Geographic’s Lake Placid/High Peaks map and the eastern side of its Saranac/Paul Smiths map. The book’s territory coincides with the boundaries of these maps. As a result, the book incorporates not only a large part of the Champlain Valley, but also pieces of the Park that had been covered by ADK’s earlier Central and Northern books. Lyon Mountain and Cheney Pond, for example, are now in High Peaks Trails.

Goodwin noted that hikers can try to save money by printing out topo maps from websites or software programs, but he questions the cost-effectiveness of this approach. “You can buy several guidebooks or maps for the cost of one printer cartridge,” he said.

A version of this story was first published on the Adirondack Almanack website.