On my mother’s side I trace my Adirondack ancestry back seven generations. That’s hardly a big deal. American toads, red-backed salamanders, garter snakes and their cousin reptiles and amphibians have been breeding, feeding and dying here, with interruptions for ice ages, for untold thousands of generations. They’re the real Adirondack natives. By comparison, bears, moose, martens and humans are Johnny-come-latelies.

To enthusiasts, these slimy and scaly oldtimers are known as “herps.” Herp derives from herpetology and herpetofauna, which in turn arise from an ancient Greek term for “creeping thing.” One hears little about Adirondack herps partly because they tend to be small and harmless, and because species diversity is low, even by modest Northeastern standards. (Blame the glaciers and our long, cold winters.) As a result, herpetologists and herp lovers tend to head south. To put the situation in perspective, the state of Mississippi, where I lived for several years, serves as home for 58 different kinds of frogs and salamanders and 84 different turtles, lizards, snakes and alligators. That’s 142 species altogether. By contrast, New York state holds only 69 species and the Adirondack Park a not-so-grand total of about 39.

All the same, our Park abounds in frogs, toads, salamanders, snakes, turtles and a single species of lizard, and more and more people are getting to know them. Consider, for example, Concetta Flore and Stefano Maugeri, naturalists from Italy whom my wife, Debbie, and I had the pleasure of taking for a guided walk. What Adirondack wildlife did they most hope to see? Concetta and Stefano knew that among biologists, North America is famed for its salamanders. More than a quarter of the world’s species live between Hudson Bay and the Mexican border, and they dearly wanted to see at least one. Conditions were against us. The weather had been hot and dry. But happily, under the last of a hundred or more rocks and logs we turned, a four-toed salamander appeared. About the length of one of my pinkie fingers, red-brown of back, and with a speckled porcelain-white belly, the amphibian produced gasps of delight. 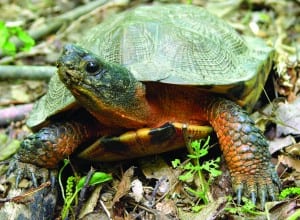 One persistent problem has made it difficult for naturalists to get to know our amphibians and reptiles. Good popular literature on the subject has been scarce. Scientific journals abound in herpetological revelation, but as far as most of us are concerned, the contents might as well be written in Latin or Greek. For years, herp lovers have relied on Roger Conant’s A Field Guide to Reptiles and Amphibians of Eastern and Central North America, in the Peterson Field Guide series. Houghton Mifflin first published the book in 1958, and the original edition was the one I used in the field as a boy. The Conant guide has been through several editions, each an improvement on the last. Still, for New York staters, the book had serious shortcomings. The majority of the species described live not in the North Woods but well to the south or west. Also, to squeeze so many species into a compact guide, the text had to be terse.

Now we can forget all that. Five distinguished herpetologists—James Gibbs, Alvin Breisch, Peter Ducey, Glenn Johnson, Richard Bothner and the late John Behler— have given us a doozy of a guide to our herps. The full title is The Amphibians and Reptiles of New York State: Identification, Natural History, and Conservation, and the publisher is Oxford University Press. 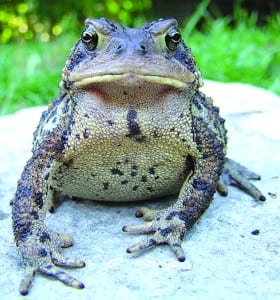 What’s so good about the book? Without being long-winded and pedantic, the text is incredibly thorough. Species descriptions are marvelously detailed, putting their field-guide forebears to shame. Every time I pick up this handsome volume, and I do often since it arrived in my office, I stand in awe of its clever, user-friendly organization. Each species is described in six sections: “Quick Identification,” “Description” (a greatly expanded version of the preceding), “Habitat,” “Natural History,” “Status and Distribution” and “Other Intriguing Facts.” There are chapters, too, on environmental threats, conservation and folklore.

The treatment of that quintessential Adirondack amphibian, the mink frog, offers a representative sample of the work as a whole. The “Quick Description” gives us this: “Pond frogs largely restricted to the Adirondack and Tug Hill Plateaus with olive-gray backs that are darkly and uniformly mottled and markings on the back legs that run parallel with rather than across the long axis of the legs (similar species: green frog).” That’s a mouthful, I admit. Still, you find all the information needed to identify a mink frog in the wild.

“Description” moves on to portray the mink frog in all its dimensions. Here one learns how the amphibian got its name (it stinks like a mink, which is to say, like urine or, as the authors delicately put it, “like crushed scallions”), that females lay up to 500 eggs in spherical clusters, and that the average mink frog measures two or three inches from blunt nose to hindquarters. Its call is described as cut-cut-cutghur- r-r, and we are told that “it is higher, more rapid, and much sharper than the banjo string call of the green frog.” 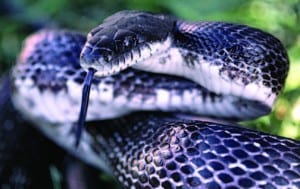 The habitat section describes the mink frog’s haunts vividly and succinctly: “Mink frogs occur in cold northern lakes, ponds, and streams with open, shallow waters dotted with lily pads and fringed with emergent vegetation.” Never seen a mink frog and wonder why? Read on. “Only by wading into water-lily-rich lakes and ponds of northern New York State are these frogs typically encountered.”

The animal’s natural history? Again, the authors deliver the goods. Mink frogs sprawl heads-up on lily pads and other vegetation and snatch whatever passing insects they can catch. Mink frogs breed in summer, with males forming small choral groups that females visit for brief dalliances. The tadpoles scrape algae off submerged objects. After a year (in the case of males) or two (females), the larvae have matured into adults ready to lay or fertilize eggs of their own. Predators that dine on mink frogs are said to include giant water bugs, raccoons, herons, wood ducks and mergansers.

Under “Status and Distribution” we’re told that mink frogs occur in the Adirondack Mountains as well on the St. Lawrence River plain to the north and the Tug Hill Plateau to the west. “Quite common in its geographically restricted habitats,” the authors report, “the mink frog is known as the ‘frog of the north’ because it has the most northern southerly limit of any frog in the state.”

Finally, “Other Intriguing Facts” offers the interesting proposition that mink frogs may be restricted to cold waters by the distinctive “globular” shape of their egg masses. Our other frogs, it seems, lay eggs “singly, in strings, or in spreading mats,” and in each case, geometry favors the diffusion of oxygen out of the water and into the eggs. The often softball-sized egg masses of mink frogs pose a problem. Oxygen cannot readily reach the developing embryos in the interior. Fortunately, cold northern waters hold more of the critical element than warm southern ones, so mink-frog eggs can manage to thrive. At least that’s the theory.

All the rest of our Adirondack herps receive the same thorough, illuminating treatment. Here you’ll learn how to tell a pickerel frog from a leopard frog and a common gartersnake from an Eastern ribbonsnake. Eleven kinds of salamander, 10 species of frog and toad, 5 turtles, one lizard and 12 snakes hop, wriggle, scurry, swim and crawl in the Adirondacks, as far we know. With the help of this extraordinary book and its color photographs, the reader, young or old, novice or veteran, will get to know them intimately.