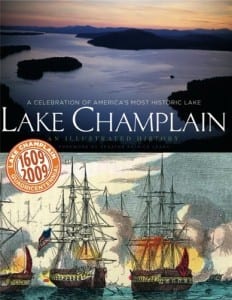 On July 12, 1609, Samuel de Champlain, along with about sixty Canadian Indians, canoed into the lake that he quickly named after himself. On the twenty-ninth, the party spotted a band of Mohawks, enemies of his Algonquin allies. Abrief battle ensued the following morning, during which Champlain, pretty much without provocation, shot and killed two Mohawks and wounded another. Though historians are not certain where this deadly encounter occurred, the consensus places it near Ticonderoga. Champlain’s drawing of the battle, published in 1613, is the earliest known European depiction of any land inside what is now the Adirondack Park.

Whether the arrival of Europeans and their ways was a good thing for Lake Champlain may be debated. It certainly wasn’t for the Mohawks he shot, and one could easily argue that it turned equally grim for a hitherto thriving ecosystem. However we assess the consequences, it began four centuries of dramatic change—ecological, political, military, cultural—all commemorated in an appealing book marking this year’s quadricentennial and published by the people at Adirondack Life. With chapters by local experts and with maps, illustrations, and photographs, this book covers the lake, from top to bottom and from prehistory to the present: nature, culture, war, commerce, transportation, and recreation.

Vermont Senator Patrick Leahy wrote the book’s foreword, wherein he emphasizes the vital importance, to two hundred thousand people, of Lake Champlain drinking water. He also notes an ongoing problem with phosphorus— from sewage and runoff from lawns and farms—and concludes, “There is no better way to honor the history of Lake Champlain than a rededication to its stewardship.” Curiously, with one critical exception, the environmental impact of four centuries of Euro-American settlement, agriculture, logging, milling, commerce, industry, and recreation is largely absent from the remainder of this volume.

Tom Henry provides descriptions of the New York, Vermont, and Quebec towns, which offer an almost endless array of “magnificent old European-style mansions,” while docks and warehouses are reminders of the lake’s vigorous commercial past. One of the earliest settlements on the New York side is Whitehall, with roots going back to 1759 and a picturesque Gothic castle, Skene Manor. Ticonderoga and Crown Point (first settled by the French in the 1730s) reflect the lake’s strategic significance during the French and Indian and Revolutionary wars. At Moriah, the history of iron mining comes into focus: by 1875 Moriah mines were producing nearly a tenth of American iron. Iron-derived wealth led to the stately homes at Westport, another town with a mining history. The east shore presents classic Vermont farmsteads, mansions, and vestiges of New England’s industrial heyday (the city of Burlington, with nearly thirty-nine thousand residents, is the largest community on the lake).

In “The Story of Lake Champlain,” Laura Hollowell deftly and comprehensively covers geology and natural history (and hers is the only chapter to address human impacts on the environment). Over three hundred species of birds live in or pass through the lake’s basin, while diverse mammal, insect, reptile, and amphibian life abounds. Fossil remains, like those of the Charlotte Whale, a beluga (now the Vermont state fossil), suggest the ancient connections between the lake and the North Atlantic. Even after centuries of human activity, the watershed hosts a wide variety of ecosystems, from the alpine tundra of our High Peaks to extensive wetlands and dunes—none of them adequately protected. A sidebar on invasive species recounts the threats of, among others, Eurasian watermilfoil, purple loosestrife, zebra mussels, and the round goby. Another sidebar delivers the dreary news about myriad forms of pollution; the worst, for now, is the runoff of rain and snowmelt, carrying fertilizer and other forms of phosphorus and leading to algae blooms. Airborne mercury means that many of the fish in the lake and its tributaries are not safe to eat, either by humans or the many other creatures that depend on them for food. Looming over everything is global warming.

William A. Haviland and John G. Crock outline the complex story of Native Americans, who arrived soon after the retreat of the last glacier, roughly twelve thousand years ago. A rich archaeological record reveals a series of Indian cultures, adapting to a changing climate and lake. Indians hunted, fished, and gathered a wide variety of foods (which varied as cooling and warming trends altered the ecosystem). When climate was stable, they established prospering cultures, which traded extensively, often over great distances. In the five hundred years before European contact, Lake Champlain Indians practiced agriculture, as well as hunting and gathering, in well-established settlements. They exploited their environment and manipulated it skillfully, but as a host of recent historians have shown, it’s by no means an idealization of the facts to say the Indians took far better care of the natural world than did the Europeans who succeeded them.

With the rise of the Iroquois Confederacy, the Champlain basin became a war zone, and the year-round settlements collapsed, so that by 1609 virtually no one was living on its shores. The pressure of Europeans with their wars, trade, and disease led to turmoil, though Abenaki soon reoccupied sites on the Vermont side. Generally allied with the French in Canada, they fought sporadically with the encroaching English settlements. With the defeat of the French in the Seven Years War in 1763, the Abenaki lost their grip on the Champlain basin and largely scattered (some to the Adirondacks), though many families remained in Vermont, living in poverty and obscurity. With pride renewed during the nationwide movement for Indian rights beginning in the 1970s, the Vermont Abenakis now constitute a vibrant part of Vermont culture.

The conflicts of the eighteenth century, Russell Bellico reminds us in the book’s longest chapter, made Lake Champlain one of the chief theaters of Euro-American warfare: “No other Lake in America has experienced the breadth of military activity.” For a century and a half, ending with the Battle of Plattsburgh in 1814, the lake, the only easily used route between the Hudson Valley and the St. Lawrence, witnessed the passage and frequent engagement of Native American, French, British, and, finally, United States forces and their canoes, bateaux, galleys, brigs, and schooners, along with the construction of forts. The author of three books on Champlain maritime and military history, Bellico is well qualified to tell this story.

Once peace was established, the new republic was eager to develop the lake’s commercial potential. In “Hinterland to International Waterway,” Ginger Gellman and Scott A. McLaughlin recount the development of the lake as a transportation artery, with trade in agricultural products, lumber, potash, and livestock. Watercraft evolved from early human-powered canoes and bateaux to sailing sloops and steamboats. The lake’s first steamboat, the Vermont, was launched at Burlington in 1809, and it wasn’t long before steamboats, many operated by the Champlain Transportation Co., dominated the lake.

Trade was the basis of wealth for leading families, such as the Kings of Burlington. At first, most commerce looked north to Canada, but after the construction of the Champlain Canal in 1823, opening a connection to the Hudson Valley and New York City, traffic greatly increased. Lighthouses were built (though it took a long time), along with extensive wharves and docks. At midcentury, consolidation began as a few large companies took control of shipping. At the same time, railroads appeared in the valley, competing with water-borne commerce, eventually capturing most of it. By mid-twentieth century, boat traffic was largely recreational.

The final chapter is “Sports & Play on Lake Champlain,” by Mark Bushnell. In 1791, Thomas Jefferson and James Madison, on what has been called the “nation’s first summer vacation,” journeyed through northern New York and reached Lake Champlain at Ticonderoga. After bad weather thwarted plans to sail north, Jefferson wrote to his daughter that Lake Champlain was inferior to Lake George for scenery and was “muddy, turbulent, and yields little game.” Though their response was less than glowing, they were the first of many thousands of American and foreign tourists. Lake Champlain became famous for its scenic vistas and sport fishing, and opulent hotels appeared. In 1835, Irish actor Tyrone Power wrote, “I have looked on many lakes, and by none have I been more delightfully beguiled than by a contemplation of this during some nine hours of sunshine, sunset, and twilight.” After the Civil War, American tourism really took off. W. H. H. “Adirondack” Murray himself became an avid promoter of Lake Champlain, publishing Lake Champlain and its Shores in 1890.

Champlain steamboats were famous for their luxury, but after the advent of the family automobile, the steamboats began a slow retreat. In the late nineteenth century, motorboats arrived and have dominated the lake ever since. Most recreation was warm-weather based, but winter sports—ice fishing, skating, ice sailing, even horse racing, and eventually snowmobiling—became increasingly popular in the twentieth century. Of the great hotels, the Hotel Champlain was the grandest, built in 1890, just south of Plattsburgh, and popular with the wealthy and famous, including Presidents William McKinley and William Howard Taft. In 1966 it became the main building for Clinton County Community College.