Don Mellor, the author of Climbing in the Adirondacks, still remembers the letter he received from some Canadians who used the book to try to find a climbing route. They spent the day bushwhacking through the woods and were not happy about it.

“Do you sniff glue? Do you work with strong chemicals?” the climbers asked. The two-page letter was embellished with stick-figure drawings of Mellor being run over by a bus, hanging from a tree and being tossed off a cliff.

The lesson: Rock climbers take their guidebooks seriously, and woe to the author who misinforms, even inadvertently.

A good climbing guide can make the difference between a fun day on rock and an epic misadventure—an afternoon lost in the woods, an unplanned rappel that requires leaving behind expensive gear or, in the worst case, an injury or rescue.

We don’t mean to disparage Mellor. Almost single-handedly, the “Dean of Adirondack Climbing” ushered in a new era of climbing in the 1980s and 1990s by documenting the hard climbs being put up in the Park, mostly around Keene Valley and Lake Placid and on Poke-O-Moonshine Mountain. The various editions of his guidebook are full of history and humor and capture a generation’s worth of vertical exploration.

But the last edition came out a dozen years ago, and it was heavily weighted toward the popular High Peaks region. In recent years, many climbers—Mellor, among them—thought it was time for a new guidebook. And the dean was ready to pass the torch to someone else.

For starters, it describes nearly 2,000 routes and variations—more than twice as many as previous guidebooks. It lists 242 climbing sites, ranging from popular roadside crags to rarely visited backcountry cliffs. And climbers are impressed: The authors sold 1,000 copies before publication.

In short, Adirondack Rock is the book that Northeast climbers have been waiting for. Building on Mellor’s foundation, Lawyer and Haas have far surpassed everyone’s expectations. I’ve been to most of the nation’s great climbing areas— Grand Tetons, City of Rocks, Joshua Tree, Yosemite Valley, Eldorado Canyon and places all over the Northeast—and used dozens of guidebooks. This book beats nearly all of them.

Right now, non-climbers are thinking: What’s the big deal? Well, when you’re halfway up a 400-foot cliff and you can’t find the next move because the route description was too vague, the guidebook is what you curse. Or when you arrive at a cliff and find it closed because peregrine falcons are nesting there—a possibility that the guidebook failed to warn you about. Or when you get lost in the woods just trying to find the cliff.

Ideally, a climbing guidebook will offer the history of each climbing site, including first ascents, and tips on when to go, where to camp and where to get a cold beer. Of course, it must also provide precise driving and hiking directions to the crags and, most important, details on each climbing route—its degree of difficulty, where the tricky spots are, how to stay on track, and how to get down safely.

Adirondack Rock does all that, and then some. Sections on major climbing areas, such as Poke-O-Moonshine, include pagesize photographs, topo maps and schematic drawings that depict each route, showing such features as overhangs, chimneys, corners and cracks.

Mellor’s book describes the last pitch this way: “A hard friction move is followed by a leftward traverse and up to an overhang. Climb out and into the left-arching yellow overlap/corners. Stay in these until it is possible to break straight up and over a friction finish.”

Lawyer and Haas write: “Step left, friction up to the overlap and break through in the middle. Climb rightward up to the second overlap, then undercling around the left end of this and up to the series of yellow left-arching, left-facing overlaps. Friction up the face immediately left of these overlaps, then break right through the arch just before its end (immediately left of the tan rock) and climb straight up the face via friction and flakes (secure but unprotected) to the tree ledge on the right.”

Some might say it’s too much information, that climbers should be able to find their own way once you get them started. Whether you agree or not, it’s clear that Lawyer and Haas did their homework. They spent two years working on the book, climbing (between the two of them) most of the routes. For those they didn’t climb, they pressed others for details. Sometimes they rappelled the route to see what it looked like. Often, they tracked down those who made first ascents, some living in other countries, to verify the historical information.

Lawyer, who retired a few years ago after selling his share of a software company, worked at the book pretty much full time. Haas, a schoolteacher, spent evenings, weekends and summer vacations at the task. For Poke-O-Moonshine alone, Lawyer and Haas spent nine days sitting below the base, methodically noting the details of the huge, roadside cliff with a spotting scope. The result is a stunningly accurate, graphical depiction of the cliff’s numerous folds, contours, corners, faces and prows.

The book couldn’t have been done without Lawyer’s computer skills. He wrote his own software program to create illustrations and compiled a vast database.

The authors gave new difficulty ratings to some of the routes, for Adirondack climbers are notorious for “sandbagging” (giving a route an easier rating than it deserves). Some may see this as meddling with tradition, but the change will please novice climbers and others who like to know exactly what they’re getting into. I’ve been sandbagged a few times myself up there.

Interspersed throughout the book are short and entertaining historical articles written by people who played a part in the region’s climbing history, such as Alan Rubin, Gary Allan and Tony Goodwin.

Perhaps the most important thing about Adirondack Rock is the amount of new vertical terrain it covers, especially in the southern part of the Park. Climbers now have many more options, which might ease the overcrowding in places such as the Beer Walls in Keene Valley. With the price of gas hovering around $4 a gallon, climbers who live south of the Park might welcome the chance to try out new places closer to home, such as Crane Mountain or the boulders at Nine Corner Lake. 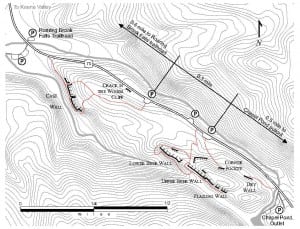 For those who like a wilderness experience, the book offers the beta on remote places, such as the cliffs near Avalanche Lake and a slide on Basin Mountain. The cover photo—of guide Emilie Drinkwater leading a 5.10 route on Snowy Mountain —perfectly captures the wilderness possibilities of Adirondack climbing. It also illustrates what’s best about this book: Snowy Mountain is a spectacular climbing locale that was not included in earlier guidebooks.

Adirondack Rock leaves a reviewer few things to quibble about. One is the small type. Older climbers may need reading glasses to glean all the information packed into these glossy pages. There are some misspellings of names (the book’s Web site has a list of minor corrections). What a pity more climbers didn’t have names like Smith or Jones instead of Boissonneault, Kwasnowski or Kolokotronis.

Climbers will want to be careful not to leave this book unprotected in the rain. I once had a Shawangunks guidebook made with glossy paper, and when it got wet, all the pages became glued together. I had to throw it out.

The only other problem is the size. Mellor’s book is light enough that I drilled a hole and ran a string through it, so I could carry it up complicated climbs. There’ll be no doing this with Adirondack Rock—it weighs more than two pounds. Fortunately, the authors provide downloadable topos from their Web site, which you can print out and carry in your pocket. It seems they really have thought of everything.

The dean himself agrees. “In your hands is a remarkable book,” Mellor writes in the foreword. “Jim and Jeremy have done their work with impressive diligence. … Having written so much myself, I respect them and the quality of their work even more.”

Rural Communities Need to be Recognized